BMW last week finally gave us an official view of the upcoming 8 Series. The return of the model after 20 years is a significant step for the Bavarian manufacturer, which will now have a weapon to take on the Mercedes-Benz E-Class, Audi S8 and Porsche Panamera.

However, only the coupe version had been confirmed… until now. We now have the first images providing a glimpse of the four-door Gran Coupe variant of the model. As recently happened with the BMW Z4, the leaked sketches are patent images, destined for the patent office from the Brazilian National Institute of Industrial Property.

Looks increasingly like there’s a regular inside spy somewhere…

This is not the first clue BMW watchers have gotten regarding what a four-door version of the 8 Series might look like. Earlier this year, BMW presented the M8 Gran Coupe as a concept at the Geneva auto show. The leaked images we’re seeing this week confirm that the automaker did not intend to lose time at the concept stage for long.

Mechanically, the Gran Coupe will be powered by the same 4.4L twin-turbo V8 found in the coupe. With 523 hp and 553 lb-ft of torque, the car will be well-equipped to rival its powerful competitors. Spy images are also floating around online of an M8 coupe variant being tested in camouflage. In its case, the same engine will deliver at least 617 hp, the same as the M5, with the distinct possibility that it will go beyond that output.

The images leaked from the Brazilian National Institute of Industrial Property include one of a cabriolet version as well. 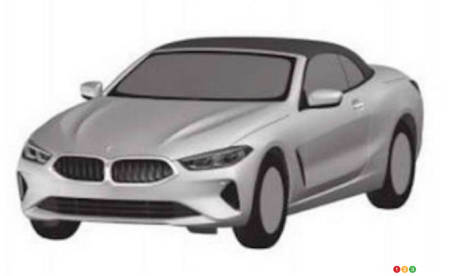 No date has been announced regarding a debut date for these models, but considering that the concepts are already in the testing phase, and that the vehicle  are being registered for patent, that debut should come sooner rather than later. The next auto show season should shed more light on what exactly is going to constitute the 8 Series product offering, and when it will be available.

20 years after it left the catalogue, the BMW 8 Series is making its return this year. The automaker has just released official images of the top-of-the-rang...

Articles By
Daniel Rufiange
Acura Teases Precision EV Concept Set to Be U...
Article
2023 Mitsubishi Outlander PHEV Is Coming this...
Article
The Revised 2023 Canyon Treads a Path Similar...
Article
More from this author