The current generation of the Porsche 911 gots its official kickoff in November 2018 at the Los Angeles Auto Show. As per tradition at the German automaker, that debut is being followed in subsequent months with the rollout of different variants.

Today at the Frankfurt auto show, Porsche showed up with new Carrera 4 variants under each arm. As their name suggests, both the coupe and convertible versions of the 911 Carrera 4 function with all-wheel drive.

Of all the 911 variants, the Carrera is the model that best delivers a balance between power, comfort and conviviality, during all four seasons. To power the Carrera 4, Porsche is using a flat-6 turbocharges engine making 379 hp and 331 lb-ft of torque, with the only transmission an automatic 8-speed dual-clutch unit. This powertrain can take the model from a stop to 100 km/h in only 4 seconds (for the convertible, add another 0.2 seconds to that).

Porsche has also given the new editions a new system for the front axle. The clutch and differential are now air-cooled and feature reinforced components. These improvements, along with Porsche’s adaptive damping system, make for improved grip on all types of road surfaces. To help with that even further, an electronically controlled limited-slip rear differential can be added as an option.

The Carrera 4 versions come standard with Porsche’s adaptive suspension system. The driver can thus choose the preferred on-road parameters for the car – hence the balance we referred to earlier. The model also gets staggered wheels (rear wheels are larger with 295-mm tires on 20-inch wheels, while the front gets 235-mm tires on 19-inch wheels). In terms of equipment, the offer is relatively generous, even if Porsche’s catalogue of available of options is famously huge. For example, the Carrera 4 comes with a partially digital instrument cluster (the centrally placed tachymeter retains its traditional design) and a 10.9-inch touchscreen is the entry point to the multimedia system. 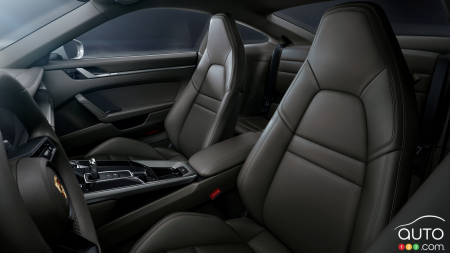