At the Detroit Auto Show, Chevrolet of course had electric models to show off, but the firm also had another model to unveil. And this time, they put environmental correctness aside, at least temporarily. What they showed us runs on gas and makes a lot of noise.

More of everything
Yes, Chevrolet already markets an RST version of its Tahoe. What it adds for 2023 is a performance package, which boosts the craziness in all respects. In effect, it takes elements and capabilities already put forward with the model’s police pursuit vehicles, especially in terms of the chassis, The results could be, well, something to behold. In fact, most of the vehicle's dynamic characteristics have been calibrated by the same engineering team that produces those police versions.

The Tahoe RST Performance offers more power through the use of induction and exhaust systems from Chevrolet's performance department. The 6.2L V8 engine delivers 433 hp in this version, as opposed to 420 in its original configuration. As for torque, it increases from 460 to 467 lb-ft. The block is paired with the group's 10-speed automatic transmission.

“We carefully tuned this vehicle to handle speed with a confidence and control that is immediately apparent behind the wheel,” said Dominique Lester, chief engineer.  “The pursuit-worthy driving dynamics inspire excitement and confidence on the road. We're proud to have achieved this level of ride and handling with what is a full-size SUV, thanks in large part to the calibration and performance tuning.”

Inside, the new variant gets the standard Luxury Package that includes a slew of active safety features and driver amenities.

This Tahoe will be recognizable thanks to a few features, like a black RST logo on the tailgate. Onboard, the standard sport pedal set adds to the vehicle's performance feel.

Production of the model will begin in the fourth quarter of this year at GM's Arlington, Texas plant.

Pricing for Canadian versions will be announced at a later date. 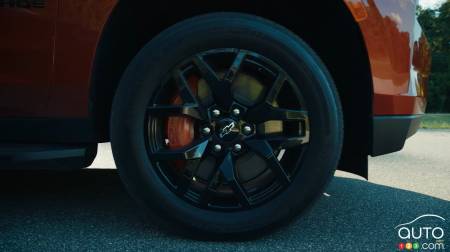 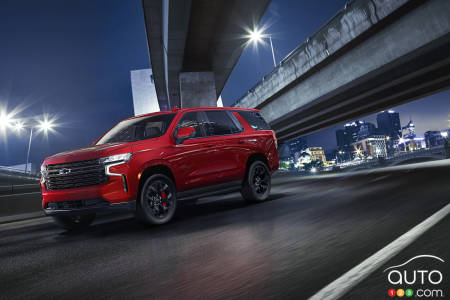 Stellantis’ presentations at the 2022 Detroit Auto Show included the introduction of the Jeep Wrangler Willys 4xe plug-in-electric on- and off-roader.