During a special event at Hudson Yards just prior to the official media day of the New York Auto Show, Genesis unveiled a new prototype that proved nothing like the SUV most expected to see.

The Genesis Mint is a fully-electric city car with two doors and room for two (three in a pinch).

“As a brand, Genesis embraces progressive design values, and the Mint Concept reinforces this commitment from a previously undiscovered perspective. Mint belongs in the city, and we are proud to introduce our evolution of the ideal city car in New York.”

The Genesis Mint is thus conceived to meet the needs of city dwellers who want a practical daily driving solution that is also highly refined. Its small dimensions make it nimble and agile in dense traffic, while Genesis promises a very dynamic driving experience.

“The Mint Concept disconnects the physical dimensions of the vehicle from its positioning as a premium product, calquing the city car of the past to today.”

The Mint project was a collective effort by the company’s design studios in the U.S. and South Korea and led by the Genesis Global Advanced Design centre in Germany. 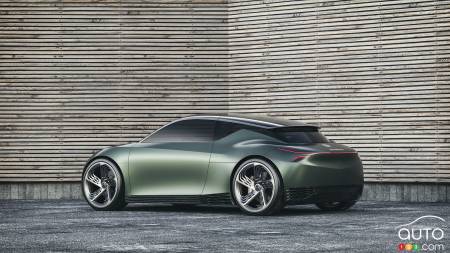 Inside and out, the Mint concept represents an evolution of the brand’s distinctive design signature. The two-door coupe is small enough that it’s well-suited not just for urban driving but for parking in tight spots.

Decked in a matte green exterior finish, the Mint stretches the three-box design to its corners with extremely short front and rear overhangs. The quad lamps in front and back extend to the corners as well, while the upper lighting elements meet to create a light band stretching around the vehicle.

Genesis’ trademark crest grille is present, as are parabolic lines wrapping around the vehicle’s body, which arc upwards as they reaches to the rear. The whole confers on the vehicle a decidedly sporty character, in line with the brand’s Athletic Elegance design concept.

One of the more original design elements of the Mint is the opening for accessing the rear section of the interior. In place of a traditional hatch opening, the prototype has scissor-style openings that open upwards to reveal a parcel shelf designed mainly for occasional use. 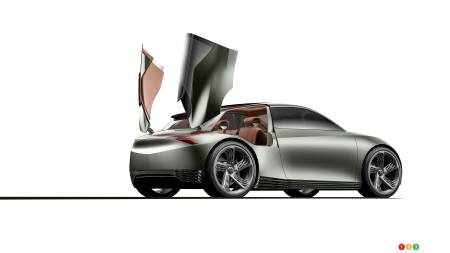 The central console, which features a central control knob, can be folded to turn the floating front bench into an extra seat when required. The instrumental panel and bench seat can be swiveled (by power command) to make getting in and out easier.

The steering wheel, meanwhile, is rectangular in shape and surrounded by six information screens that each display different vehicle-function data. A seventh screen mounted within the steering wheel displays primary vehicle information while allowing the driver to maintain focus on the road ahead.

The Genesis Mint prototype runs on an all-electric powertrain using a high-density battery pack. According to Genesis, the system provides a range of 320 km on a full charge.

This car is far enough out there that it’s probably not realistic to expect Genesis to move to a production phase, but the company would well incorporate several of the design and technological elements present in it in future models. 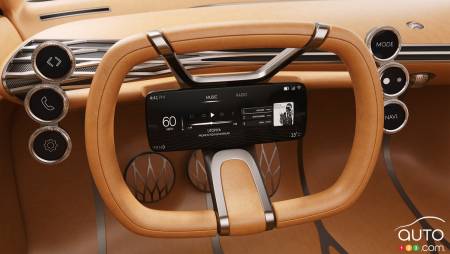 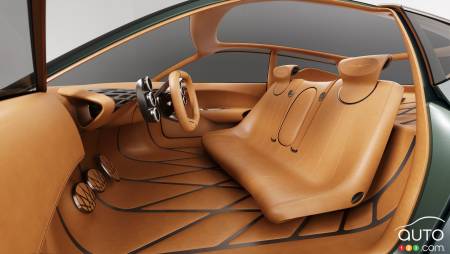