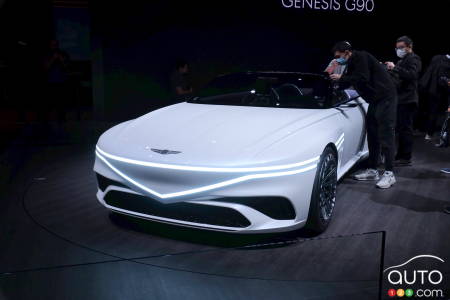 •    The study offers something not seen on the market anymore: a four-seat convertible configuration.

•    The X Convertible concept works with an all-electric powertrain.

Los Angeles, CA - As the in-house luxury brand within the Hyundai Motor Group, Genesis, Hyundai's luxury brand, has shown us over the past six years that it is serious about establishing itself in the premium car market. It models to date have been award-winners and become solid sellers, and interest in the company and its products continues to grow.

Genesis is also fully committed to electrification, and the time is coming when it will offer only battery-powered vehicles. What we don't know for sure yet is which segments it will decide to enter with its new offerings. Because it is relatively new to the field, it is still studying the market and trying to define what people really want from it.

Genesis has thus been active in presenting a very eclectic range of concepts in recent years. The X Convertible Concept presented this week in Los Angeles is a continuation of the X Concept and X Speedium Coupe studies introduced in recent years. Will Genesis actually go ahead though and produce a convertible? Impossible to know, and no one at the company is saying anything either way. On the other hand, the reaction of those present at the unveiling was very positive.

It has to be said that Luc Donckerwolke, Genesis' head of design and creation, had a lot to do with it. The man needs no further introduction within the industry.

The really notable thing about this soft-top concept is its four-seat configuration. Convertibles that can seat four people are as common as dodo birds in the modern automotive universe.

The rest of the presentation is very modern, but that's to be expected from a model that isn't yet designed to be functional on the road.

We'll see what Genesis decides to do with this latest prototype, but let's just say that the styling exercise is successful. And we couldn’t help but note that, unlike the X Speedium Concept, the lines are closer to those of a production model. 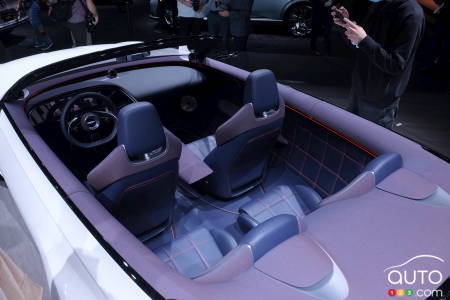 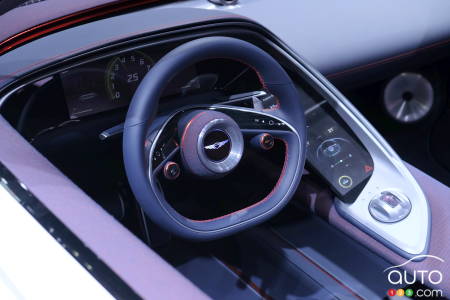 What's really nice is the four-seat interior configuration. This is a segment that has all but disappeared from the industry. With the advent of the electric car, which allows for more spacious interiors, this may be an interesting window of opportunity for manufacturers... provided that the obsession with profitability doesn't get in the way.

Still on the subject of the interior, there is of course a modern presentation and a design where the driver is the center of attention. The cocoon also offers a lot of recycled and eco-responsible materials; it's in the wind.

Of course, we tried to find out from some of the executives if the idea of bringing this vehicle to market had even been considered at any level, but they would have had to have had several alcoholic drinks to learn anything.

Some of them have a politician's seed in the art of skating.

What we did manage to capture through the whispers is that the young company is still at the stage of throwing lines in the water to understand who their customers are and who they can be.

So we can continue to hope, but after this trilogy of attractive studies, we will have to move from words to deeds, or simply to another file. 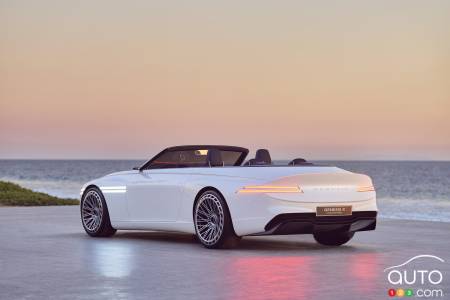 There are very few convertibles on the market that can tackle off-road terrain or winter conditions with ease. At the 2007 Los Angeles Auto Show, Audi is in...

At the Los Angeles Auto Show, Fiat announced the return of the 500 to North America, this time in all-electric form. For the first time, the 500e model will ...