New York, NY — Of all the automakers, Nissan-Renault has placed the biggest bet on electric vehicles. The partners have gone on record saying they intend to sell 1.5 million electric vehicles by 2016, and believe EVs will have a 10 percent market share by 2020.

Not surprising then, that Nissan's premier division, Infiniti, also gets electric marching orders, and the first Infiniti EV will be a production version of a concept that got its world debut at the New York International Auto Show — the Infiniti LE Concept. Nissan president Carlos Ghosn had the honours of revealing the Infiniti LE and stated that the sleek sedan is “85 percent accurate to what you will be able to drive in the next 24 months.”


The first aspect of LE to point out is that it is not a re-badged Nissan LEAF. Far from it.

“The challenge to the engineers and designers was to make it nothing like the Leaf,” noted Andy Palmer, a Nissan vice-president with a lot on his plate, including global operations of Infiniti.

LE features lightweight aluminum body panels. Its coefficient of drag is a fantastic 0.25.

Infiniti also decided that its first EV had to be on a platform designed specifically for electric power. “When you make a transformation, you end up putting the battery where the fuel tank is, and end up with awful weight distribution,” said Palmer. “We will not put an Infiniti badge on something that doesn't ride and handle properly.”

It should accelerate properly too, thanks to an e-powertrain with 240 lb-ft of torque, juiced by a 24 kWh lithium-ion battery pack. A full charge is expected to give the LE a range of 160 km (100 miles).

The LE can be plugged in via a receptacle behind the Infiniti badge on the grille. But it also features wireless charging. In fact, if all goes according to plan, the LE should be the first production vehicle with a built-in wireless charging system.

New York, NY -- Nissan has a very aggressive and sporting side to its nature. The Versa sedan is on the other side.

2012 Impreza to hit the market this summer, possibly afte...

According to Tom Doll, Executive Vice President of Subaru of America, the redesigned 2012 Subaru Impreza will hit the market in late summer. Given the timeli... 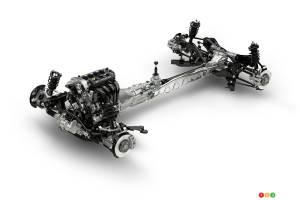