Almost for as long as it has been in existence, Infiniti has struggled to establish a sharply defined brand image, more specifically one strong enough to go to battle against the German holy trinity of premium carmakers, BMW, Audi and Mercedes-Benz.

The latest generation of vehicles from the Nissan division did manage to define a successful design signature. Progress is clearly being made.

But as is the case everywhere in the industry right now, things could change radically once again, and quickly. The manufacturer is preparing to turn ship in the direction of electric mobility as we approach 2020. Next week at the Shanghai auto show, it will debut its latest creation, the Qs Inspiration concept car.

And of course, it’s fluffing up interest early with the release of two images and a few details ahead of the launch.

New visual signature
For designers, electric vehicles have the huge advantage of providing a clean slate on which they can work their magic. Industry-wide, we’re seeing radically different-looking models come out of the design studios of manufacturers’ EV divisions.

The Qs Inspiration is a prime example. At the same time it opens a window into the overall design direction the manufacturer is taking.

Infiniti actually revealed few details about the concept car, but we can assume its future design cues will borrow from this concept. The Qs Inspiration is quite similar in appearance to the QX Inspiration first presented this past January at the Detroit auto show. First and foremost is the absence of a conventional front grille, buttressed by very thin LED lights on each side. 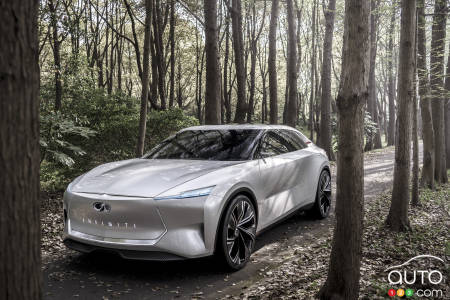 The overall silhouette is extremely streamlined right through to the rear of the car, although along the way there are muscle-enhancing elements.

From the photos we don’t get an idea of the back end, however. Same goes for the interior, although in the case of concept vehicles whatever manufacturers show us needs to be taken with a healthy grain of salt.

As for what’s under that streamlined hood, no details there either. We do know that the model sits on a new architecture designed specifically for electric powertrains, and that four-wheel drive will be possible.

Looking farther ahead, it’s possible that we’ll see a production version ready sometime prior to 2025. That’s when Infiniti wants half of its sales to consist of models that electricity-powered in some form or other.

The first Infiniti-badged EV is expected for 2021; it will most likely be an SUV based on the QX Inspiration concept.