The first launch of the Defender saw two models offered: the 90 two-door variant and the 110 four-door version. Shortly after their debut, rumours began to circulate about the introduction of other variants, including one called the 130.

That 130 is now about ready to be introduced, and Land Rover plans a big unveiling set for May 31st. We're talking about a version that's almost 15 inches longer than the 110, but with the same wheelbase as that model. Land Rover say the model will offer similar handling, but for off-road driving, the exit angle will be different at the rear because of the extended section in that area.

For those who might take their Land Rover Defender off-road, of course, which isn’t everyone. 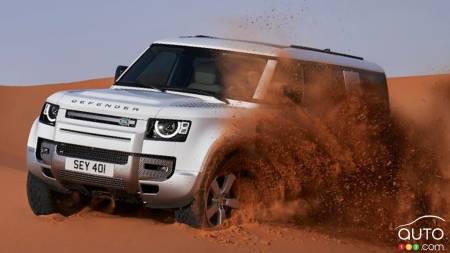 Ahead of the model's presentation, Land Rover has unveiled an image of the model in action, the sand raised by the vehicle's movement cleverly hiding the parts of the vehicle it doesn’t want you to see just yet.

Of course, this version will serve those who need more passenger space in the third row, but also those who want more volume for cargo. The company also revealed what the possible configurations inside would be and we learn that the model will be able to accommodate eight people, two in the front and six in the other two rows.

The 110 model offers a maximum of seven seats.

Mechanically, we expect the Defender 130 to inherit the 90 and 110 versions' powertrain, but it will be interesting to see if the 2.0L turbocharged 4-cylinder will be retained to haul around more mass. It still offers 296 hp and 295 lb-ft of torque.

We'll get back to you on the 31st with all the details.

Honda Shows Off the Interior of the New 2023 CR-V

Honda has shared an image of the interior of its 2023 CR-V, this ahead of the full unveiling set for next month. The model gets a first substantial overhaul ...