Celebrating its 100th anniversary in 2017, Mitsubishi is using the occasion of the 2017 Montreal Auto Show for the North American launch of its GT-PHEV concept vehicle, which provides a compelling peek into the Japanese carmaker’s future design strategies.

First unveiled at the 2016 Paris Motor Show, the GT-PHEV is a plug-in hybrid crossover equipped with three electric motors—one in the front and two in the rear—all governed by Mitsubishi’s Super All-Wheel Control system. It can run 120 km without touching the fuel supply, and its total range, with a full tank and fully recharged battery, is up around 1,200 km.

With a range like that, it’s fitting that the GT-PHEV concept looks like a grand touring car. According to Mitsubishi, it embodies the concepts of Functional Beauty, Sculptured Dynamism and Japanese Craftsmanship.

The interior of the Mitsubishi GT-PHEV features a horizontal dashboard that maximizes the sensation of open space, all while allowing the driver to easily detect any changes in the vehicle’s attitude. The elevated central console serves to envelop occupants in a comfortable, safe, cocoon-like environment. The burgundy colour-themed leather trims are colour-coordinated with the exterior roof, serving to heighten a feeling of elegance and comfort. 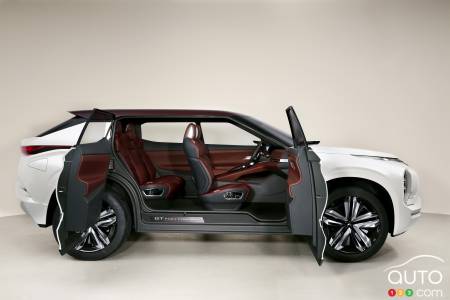 Montreal 2017: A look back at the Mitsubishi GT-PHEV (video)

Mitsubishi, which celebrates 100 years in 2017, came to the 2017 Montreal Auto Show to present the new GT-PHEV concept and the company’s design strategy for ...

Toyota will present a number of Canadian premieres and one North America debut this year in Montreal. Find out which ones!