Japan’s second-biggest automaker will present a new all-electric city car concept at the upcoming Tokyo auto show. Nissan’s IMk prototype is truly tiny and it clearly not intended for the North American market, but the technologies it showcases certainly are. They’ll just be found in other future models.

A main purpose for the IMK, in fact, is to preview the company’s latest advances in the fields of electrification and autonomous driving.

As for the name of the little crossover, the IM letters refer to Nissan’s Intelligent Mobility development strategy, while the k is a nod to the minuscule kei cars that are ubiquitous in Japan. 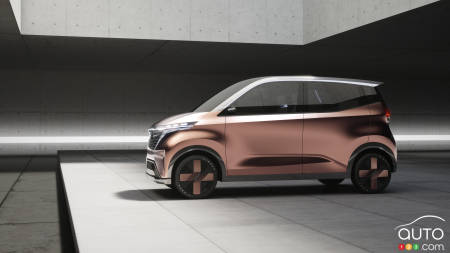 The IMk design study looks like nothing so much as a wagon with an elevated roof, and its proportions are similar to Nissan’s Dayz model. It does, however, sit on a new EV-only platform.

Nissan says it wants 30% of the vehicles it sells globally to be electrified by 2023, and that would include the ePower technology already in use in Japan. The company is also working on a new EV platform that will be able to underpin eight new vehicle models. By that 2023 marker, the objective is also to be selling one million electrified vehicles annually.

Some of the technologies included in the IMk concept also touch on autonomous drive systems. For example, a smartphone app will enable getting out of the vehicle and having it park itself. Another press of button will get the vehicle to come find you. Inside, the focus is on living-room-level comfort, the goal total relaxation for occupants. The owner’s smartphone can be connected to the vehicle so that the latter knows when the owner is approaching, and adjust the seating position, ambient lighting and climate control, for example.

Press days at the Tokyo auto show take place on October 23 and 24. Stay tuned for all the big reveals! Mini Urbanaut: A Box Containing the Interior of the Future?

The Mini Urbanaut is a concept that envision what future self-driving vehicles might be like on the inside. In an ideal future world, the boxy vehicle would ...