The light commercial concept, called the NV200, was penned by Japanese and European designers who were given no initial idea of what form the vehicle should take. It's not the usual way to create a concept vehicle by any means, though the resulting machine is futuristic and entirely practical.


"A light commercial vehicle has a specific job to perform, but that's no reason to design a purely rational vehicle with no warmth. For NV200, function becomes the aesthetic. Our concept is a highly efficient tool but one with a human touch," says Shiro Nakamura, senior vice president and chief creative officer at Nissan.

The concept model in particular was designed to be used by an underwater photographer, with its wet and dry storage compartments for diving equipment, but it could be tailored to various needs, Nissan says.

Storage compartments are housed within a pod which sits in the cargo area. When the NV200 is parked, the pod (and cargo areas within) extend out the rear, and the section left behind transforms into a mobile office. This could make the NV200 ideal for salespeople or construction site foremen, for instance.

Look for it on sale anytime soon? Probably not, but it's a novel idea nonetheless.
photo:Nissan 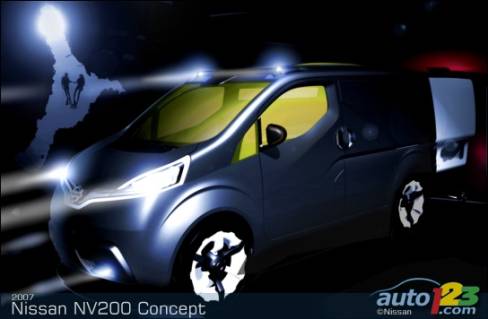 According to a report from Reuters, Nissan Motor Company yesterday announced Japanese pricing for its upcoming GT-R performance car. Set to be unveiled at th...

Nissan will unveil the BladeGlider Concept at the upcoming Tokyo Auto Show. Designed by Ben Bowlby, who's also responsible for the DeltaWing race car, this s...

If you're into auto shows, chances are you've seen a few interesting looking concept cars. Some are futuristic; some are wild, while others, like the Nissan ...