Jeep came fully equipped to the 2019 Moab Easter Safari with six different concepts based on its new Gladiator pickup, a great way to stir up interest in the popular model even more. And while for some of them a production version is out of the question, for others it’s not so cut and dried.

The one most people are pointing a hopeful finger at is the J6, basically a two-door version of the Gladiator. Speaking with Australian outlet Drive, Jeep division boss Tim Kuniskis mentioned that selling the top brass at FCA on the idea of a two-door Gladiator wouldn’t be easy, but the healthy sales figures of the 2-door Wrangler would be a prime part of the pitch.

On the other hand, we can forget about ever seeing a commercially-produced version of the Gladiator powered by a Hellcat V8 engine that was also at the Moab event. According to Jeep, while the unit itself fits like a glove inside the engine compartment of the vehicle, but the lack of space around it means the vehicle would have no chance of meeting the standards set out in U.S. crash and safety tests. 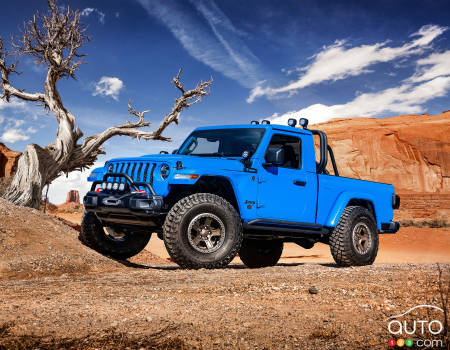 In any case, we know there’s hope for a two-door version of the new pickup from Jeep. And if you’re doubting it will ever happen, consider that the company would not have put together the J6 concept if it wasn’t to send up a trial balloon and gauge which way the consumer wind is blowing.

On top of which, the J6 it’s a real looker, by general consensus. The smart bet is that we’ll see a production version in the coming months or years…

For Jeep, the Gladiator is shaping up as a solid cash cow, and variants will inevitably be introduced over time. The most obvious one to start the ball rolling would be a 2-door mini-pickup version. On top of which, the J6 is a real looker, by general consensus. The smart bet is that we’ll see a production version in the coming months or years…