The 45th edition of the Tokyo Motor Show is being largely dominated by concept cars, and now Subaru has added its entry with the VIZIV Performance. After introducing the VIZIV-7 utility model (a foreshadower of the future Subaru Ascent) during recent auto shows, the company is following up with a sport sedan.

The VIZIV name, for those not yet familiar with it, is a contraction of the term “Vision for Innovation”.

Roughly the same size as a Subaru Impreza, the VIZIV Performance concept takes its design inspiration from that popular compact car and from the Legacy mid-size sedan, as well as from the WRX, still a top performer in rally racing around the world. The new prototype incorporates Subaru’s “Dynamic x Solid” design philosophy.

The car’s hunkered posture lowers its centre of gravity, while the carbon-fibre body panels (fenders, bumpers, roof, etc.) decrease its overall weight. The grille in three-dimensional form is flanked by updated headlamps, more modern than those of the brand’s current models. The taillights have been similarly modernized; these sit above four exhaust pipes, and the overall look that results is one of enhanced sportiness. According to Subaru, the more pronounced fenders reinforce the impression of rigidity and evoke the power of the symmetrical all-wheel drive and of the Boxer engine (whose technical details have not been divulged).

As for the technologies included in the VIZIV Performance concept, Subaru has further perfected its renowned EyeSight drive assist system, which works in tandem with state-of-the-art radars and a highly precise satellite-navigation system. The aim is to push safety to a new level, and eliminate road accidents altogether by the beginning of the next decade. 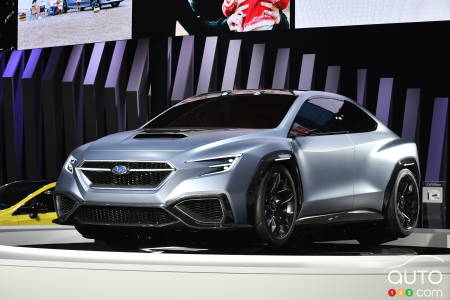 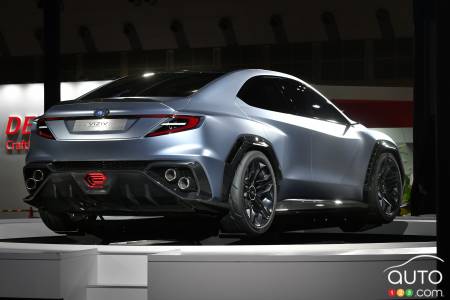