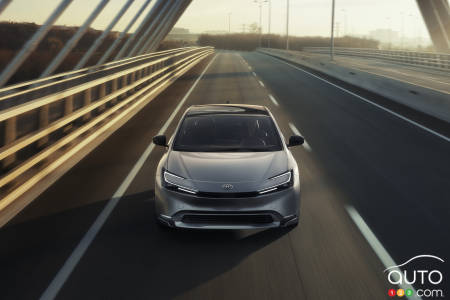 There's no denying the importance of the Toyota Prius in recent automotive history. The first Prius in 2001 had an undeniable influence on what was to follow, becoming the world's first production hybrid car.

A style that remains distinct
Available in LE, XLE and Limited trim levels, the 2023 Prius is built on the second-generation TNGA-C platform, offering a low centre of gravity with reduced weight and increased rigidity compared to the previous generation. Designed in Japan, the all-new Prius offers modern, yet still slightly offbeat styling that makes it look something like a cross between a Dodge Dart and a Tesla. 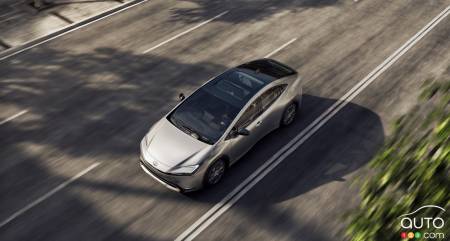 Photo: Toyota
2023 Toyota Prius - From above

More aerodynamic and lower
The new Prius lowers the roofline by 5 cm compared to the previous generation, for a more athletic look. The rear end is wider, adding to its dynamic appearance. The new hybrid system improves both fuel economy and driving performance by increasing engine and battery power.

Under the hood is the fifth-generation hybrid powertrain coupled with a larger 2.0L engine and a newly developed lithium-ion battery located under the rear seat. On 4WD models, an electronic on-demand system has been adopted. It uses a motor to drive the rear wheels, resulting in stable driving performance when starting and on slippery surfaces such as snow. A new Prius Prime
Available in SE, XSE and XSE premium versions, the 2023 Prius Prime is built on the same TNGA-C platform as the Prius. It features a solar roof that delivers a bit more battery charge when the vehicle is parked. The panels provide additional power for accessory functions, such as climate control, while driving, and Toyota has used a clever design that hides the electrodes for a smooth, shiny appearance.

Some differences to note
Compared to the previous-generation Prius Prime, this new edition is wider, 5 cm lower and 2.2 cm longer. The location of the battery is also optimized, with placement under the rear seat for a low centre of gravity and increased luggage capacity.

More performance
Under the hood is the fifth-generation hybrid powertrain coupled with a 2.0L engine and a newly developed lithium-ion battery located under the rear seat. The range in electric mode increases from 40 to 60 km with a total power increased to 220 hp, and a 0 to 100 km/h time of 6.9 seconds. 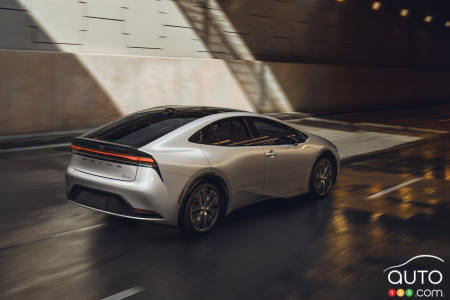 2023 Toyota Prius Will Be Revealed at Los Angeles Auto Show

The 2023 Toyota Prius will likely be the model the Japanese automaker unveils at the Los Angeles Auto Show on November 16. Toyota has not confirmed that but ...

The all-new 2013 Toyota RAV4 will make its world debut during a press conference at 9 am (PST) on Wednesday, November 28th at the Toyota stand in the South H...