Place des Arts in Montreal: Ground zero of the city’s renowned International Jazz Festival was the setting last week for the presentation of two highly popular new models from Hyundai, perennial sponsor of the long-running festival.

The all electric Kona, first unveiled at the last New York auto show, was the big attention-getter at Hyundai’s presentation, for the simple reason that it will constitute the very first all-electric subcompact SUV to hit the Canadian when it debuts in October 2018. The electric KONA offers a range of 402 km thanks to a 201-hp motor that delivers 291 lb-ft of torque – numbers that place it ahead of the popular Bolt subcompact in terms of performance. Its charging time on a 240-volt station is estimated to take nearly 10 hours, while use of a quick charging home station allows for attaining an 80% charge in 54 minutes.

In terms of technologies, the KONA will come with Android Auto and Apple CarPlay compatibility, head-up display and wireless charging for smartphones. As for safety technologies, the car will feature a number of advanced drive assist systems incorporated in the Hyundai Smart Sense package.

It’s worth noting that the gasoline-engine KONA that is already on the market in Canada constitutes one of the best offerings in its class this year, with reliability, technologies, engine choices, value and driving pleasure the most often-cited reasons for its popularity. Even the 2018 Honda CR-V, a perennial Canadian favourite, lags behind the KONA in terms of tech and the choice of available powertrains! The new Nissan Kicks has also been found wanting in comparison, specifically in terms of quality of construction.

The only notable drawback in the case of Hyundai’s new small-crossover offering is the absence of all-wheel drive, throughout the trim range.

We’re impatient to see the KONA electric make its entrance on the market to see just what it’s capable of. This edition of the model is still, for the moment, in the pre-production phase; the model on display in Montreal that I had the chance to check out has no battery, for example. No pricing has been advanced by the company either. 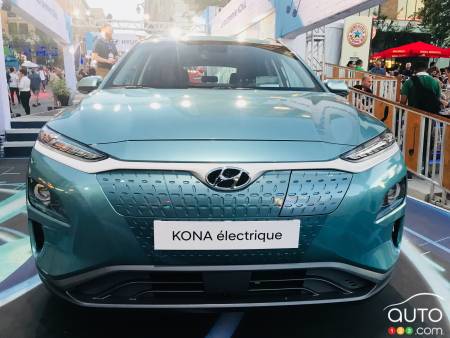 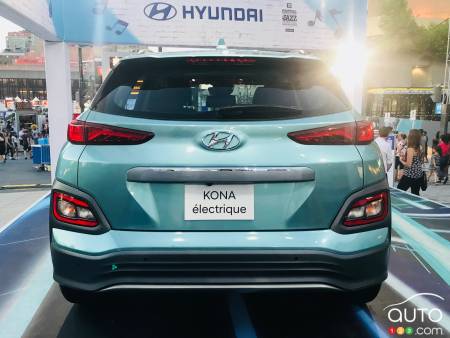 The other model on display at Jazz Fest 2018 is also a strong favourite among Canadian consumers, and there’s an added attraction to it this year: the 2019 Santa Fe will, for the first time, be offered with a 4-cylinder turbo diesel engine. The two other engine options for consumers will be largely the same as those offered with the current model: a 2.4L 4-cylinder (185 hp) and a 2.0L 4-cylinder turbocharged engine (232 hp). All powertrains will feature an 8-speed automatic transmission, and an all-wheel drive system will be available as well.

The 2019 Santa Fe will actually be the continuation of the model we know in 2018 as the Santa Fe Sport.  The 7-seat version of the model will continue to be produced, under the designation Santa Fe XL. This version will, however, be longer and larger than its predecessor, and thus provide more interior space. The diesel-powered version can be had with either the 5-seat of 7-seat configuration.

For the 2019 model-year, the Tucson will provide improved visibility for drivers thanks to a larger window presentation. Buyers will also get a revised interior headlined by an infotainment system located at the top of the dashboard. A head-up display is also now included. The Santa Fe also gets a new safety feature, in the form of a rear-passenger-detection system that will alert the departing driver to the presence of a child in the rear row.

The Santa Fe will also be equipped with an available self-leveling suspension that ensures improved stability, even with the added weight of extra passengers or a trailer.

Canadian consumers will be able to acquire the new 2019 Santa Fe beginning this summer; initially only five-seat models with the 2.4L 4-cylinder will be available. Versions with the 4-cylinder turbo gasoline engine will follow later in the year, while the range-topping and 7-seat models featuring the 2.2L will only debut early in the new year.

It will be interesting for you to discover all the standard features that will be offered in the Santa Fe, including certain advanced safety modules as well as connectivity systems like Apple CarPlay and Android Auto. 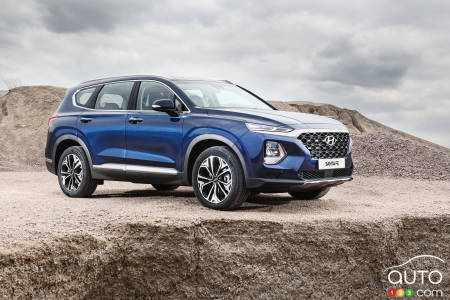 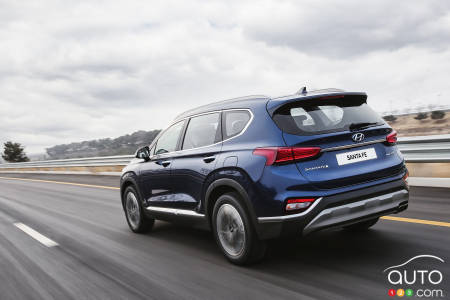