Hyundai has confirmed a hybrid version of the Kona SUV for the European market. The model will run on a 1.6L 4-cylinder in concert with a 32-kW electric motor. Total output for the combo will be 139 hp.

For the moment, no mention is being made regarding a North American launch. A company spokesperson told American media outlets that it had no comment to make on that subject, for the moment.

It would be no surprise at all to see a Kona hybrid on our roads at some point, however. For one, the Kona has been a raging success on our continent since its debut. For two, the Kona hybrid will inherit the powertrain currently in service in the Kia Niro Hybrid and Hyundai IONIQ Hybrid.

It will even use the same 6-speed automatic transmission as those two models, both of which are available in North America. 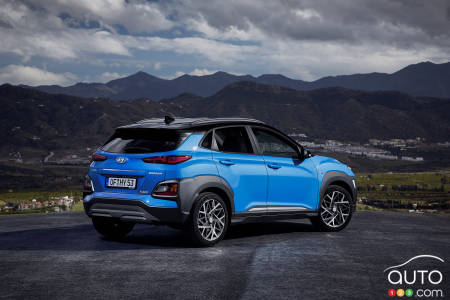 Esthetically, the new version is identical to the Kona running purely on gasoline, other than a few badges identifying the hybrid as such. This edition will also get exclusive 16- or 18-inch wheels.

Inside, white accents will liven up the interior, notably around the climate control vents and gear shifter. Both cloth and leather are possible for the seats. Hyundai is also going to offer several alternative colour schemes for the interior, among them lime green, orange and red.

The Hyundai Kona hybrid will be available in Europe as of August. If the company does decide to bring it across the Atlantic, it could well choose the Los Angeles Auto Show in November for the big reveal.

Our review of the 2019 Hyundai Kona

Our review of the 2019 Hyundai Kona Electric 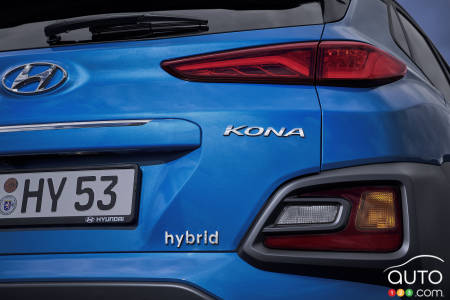 Here is the 3rd edition of our annual Auto123.com Hybrid and Electric Car Guide! We start with a look at the 2019 hybrid models available in Canada. Check ou...

Hyundai is not one to do things halfway, and the Korean automaker makes that crystal clear once more with the 2018 Hyundai IONIQ Electric Plus, the third var...