News
Read Part I and Part II of our long-term test time with the Hyundai Santa Fe Sport.

Parting is such sweet sorrow
That's right, it's over. Our long-term test of the 2013 Hyundai Santa Fe Sport 2.0T SE has come to an end, and truthfully the entire office is a little bummed out at the prospect. For five months the Santa Fe Sport made the rounds from kid-packed families to singletons; this crossover satisfied many and all. However, it wasn't all roses and smiles, which is why we've put together this final update.

After covering roughly 10,000km in our 2013 Hyundai Santa Fe Sport long-term tester through two seasons (winter and spring) and with multiple drivers behind the wheel, we discovered that this crossover is as utilitarian as it is sporty.
Comments from the peanut gallery
A long-term road test is an ideal means to give a greater number of people access to a given product. In our time with the Santa Fe Sport, we handed the keys to a number of staffers after which we collected their comments.

Here are a few that summarize the overall impressions of Team Auto123.com.

Maxime A. (current owner of a 2009 Santa Fe): We're not talking about a breath of fresh air or a mere evolution, but rather a revolution! While I enjoy driving my 2009 Santa Fe, the sporty nature of the 2013 model feels like driving a luxury sedan! You'll love the completely new interior and the jet-set exterior!

Suzanne G.: The 2013 Hyundai Santa Fe Sport 2.0T SE is not only competent on snow- and slush-covered roads, but also safe and confidence-inspiring thanks to ABS brakes and stability control. Visibility is great. I enjoyed a nice view of the road, was sitting high and feeling warm, listening to the Rolling Stones, and revelling in the vehicle's cocoon-like interior. This is one good-looking crossover which also made me look good behind the wheel.

The report card
After tabulating scores and comments from all those who gave the 2013 Hyundai Santa Fe Sport 2.0T SE long-term tester a go, we've come up with the final report card.

Styling to fall for
As we said in Part I and II, the highest marks of all go to the Hyundai Santa Fe Sport's exterior looks. Truly one of the best-looking crossovers currently on the market, not one negative thing was said about the vehicle's exterior design. In fact, so good-looking is this crossover, that a few of its shortcomings (which we'll get to in a moment) can and were even forgiven by a few testers.

It's true what they say: If you like your car's looks, many other things will be forgotten.

Value packed
The final high point we'd like to touch on was the overall value of the 2013 Hyundai Santa Fe Sport 2.0T SE. Perhaps this is the most important of all. While not the most obvious, the value of a vehicle is a very big selling point. Are you really getting what you pay for? You never want to get less, but what if you can get more?

Well, with the Hyundai Santa Fe Sport 2.0T SE, the feeling that you're getting so much more than what you're paying for was felt across the board. On more than one occasion a driver would guess the MSRP well above the actual cost.

Without really realizing what we were doing, we soon used the 2013 Hyundai Santa Fe Sport SE as a benchmark upon which to measure up other crossovers that landed in our parking lot. Were they as good? Often, no, and yet their price tags were usually higher.

Now, the lows... No car is perfect, and the 2013 Hyundai Santa Fe Sport SE, while a fantastic vehicle, was not impervious to faults.

High fuel consumption
The low scores came from an area we were made aware of in the first few weeks of possession: fuel consumption. While this is something we tried to regulate, it's something the Hyundai Santa Fe Sport 2.0T SE continued to struggle with.

Fuel consumption numbers hovered in the 13-14L/100km range, well above what they should have been. And while they did decrease ever so slightly over the final week or so of the long-term test, we assume it was because of outside temperatures requiring no heat or A/C be used while we drove.

Good drive marred by steering
What might be a little shocking, as we've said a few times how sporty the 2013 Hyundai Santa Fe Sport SE felt, was the fact that performance and driving dynamics also scored poorly. For a number of drivers, steering feel fell short. Perhaps the Driver Selectable Steering might need a few tweaks on future models.

Transmission teething problems
The last low comes in the form of a transmission that continued to plague us over the months. While it felt the worst in the colder months, the Hyundai Santa Fe Sport's transmission difficulty with cold starts was a sore point for most and something we even had checked at the dealer.

As we've not heard of any other transmission issues with the 2013 Santa Fe Sport, we are going to assume that this was a teething issue. If you currently drive one and are experiencing otherwise, let us know!

A lasting impression
Overall, our 2013 Hyundai Santa Fe Sport SE long-term tester was enjoyed by many and for many reasons. And even though most of the lows pertained to driving dynamics, every time the keys were handed back the same comments were made: "What a fun, good-natured vehicle."

Here is a vehicle that's loaded to the gills with amenities and comfort, able to fit five comfortably, has plenty of trunk space, is capable in the winter, and offers a bit of attitude behind the wheel, all for a decent price.

It's safe to say we definitely made the right choice by selecting the Hyundai Santa Fe Sport as our 2013 Compact Utility of the Year at the Auto123.com Awards. 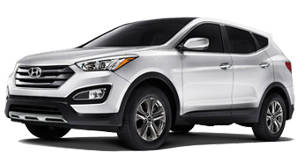 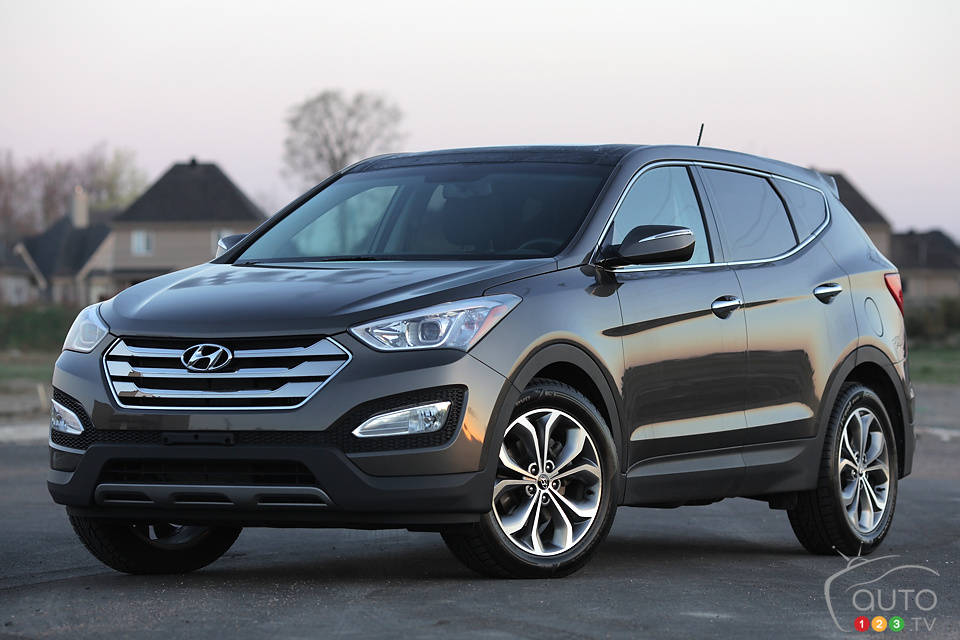 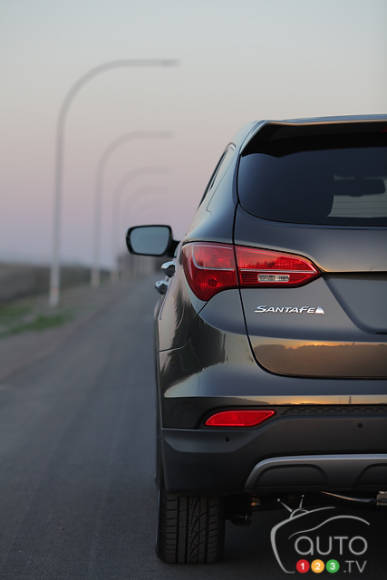 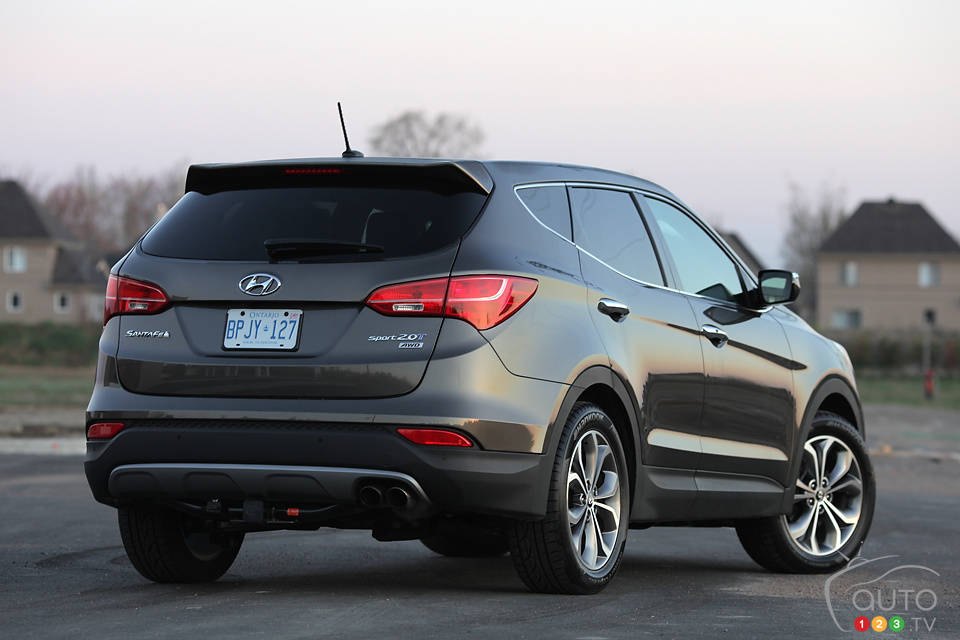 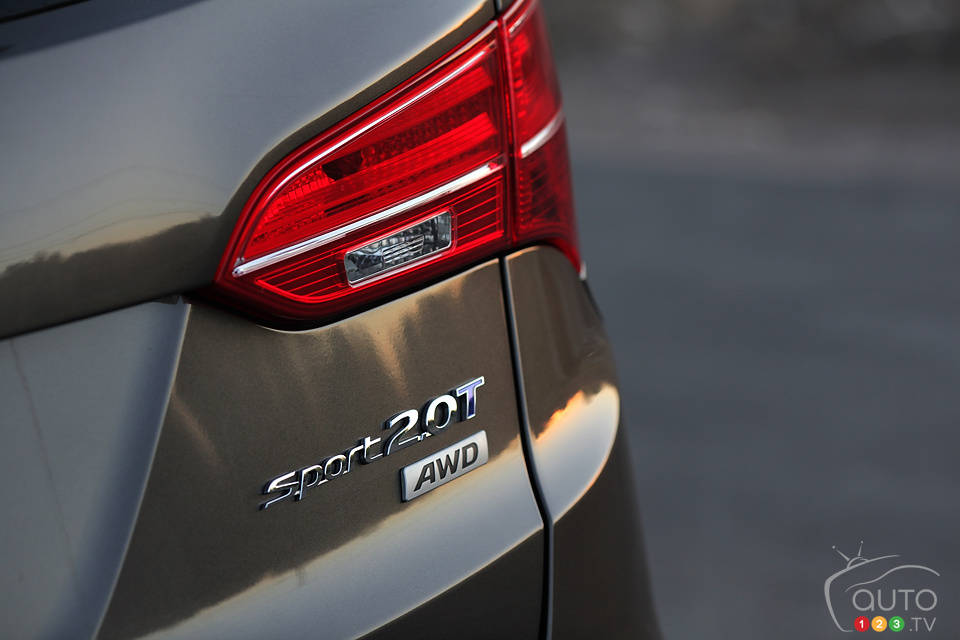 As you can imagine, long-term tests on new cars can and do reveal both strong points and shortcomings. This is the principal reason why they are a worthy ind...

For those of you who've been following our antics here at Auto123.com, you know we've landed ourselves a 2013 Hyundai Santa Fe Sport as a long-term tester; a...

As the resident "mom" on staff, it's often left to me to disprove a car's family-friendliness or conversely show how versatile it can be. With a baby seat, s...