The return of Alfa Romeo is finally upon us in the form of a two-seat, 4-cylinder, carbon fibre and aluminum chassis sports car that’s ready to tear your face off. Also, it’ll do this facial reconstruction in the most theatrically stylish way possible.

After years and years of promises, the 2015 Alfa Romeo 4C will be coming to our North American shores.

Can a lightly trimmed turbocharged sports car command some serious cash (because it does), even if it’s from Italy?

What is the Alfa Romeo 4C?
After teasing us for over 10 years, Alfa Romeo will enter the North American market once again with a go-kart dressed up in a stylish car suit. It’s as close to a Lotus Elise as you can get without drinking English Breakfast.

Powered by a turbocharged 1.75L 4-cylinder engine with a sound that Thor would be envious of, the Alfa Romeo 4C is a lightweight with more than enough power to turn your commute into a gentleman’s racing weekend.

2015 Alfa Romeo 4C Price and Specs
Only one engine is available with the 4C -- a 1.75L all-aluminum turbo four-pot -- that cranks out 237 hp and 258 lb-ft of torque. It’s mated to a 6-speed dual-clutch automatic transmission named Alfa TCT. No manual transmission is offered, though the TCT autobox does have a fantastic manual mode with paddle shifters.

For 2015, only two “trims” are available at the time of writing: the base 4C for $61,995 (onto which you can add numerous a la carte options, yet to be announced) or the Launch Edition for $75,995, which adds unique paint, Bi-xenon HID headlights with LED daytime running lights, side air intakes, carbon fibre rear spoiler, race suspension running, racing exhaust, and a laundry list of other components.

Driving the 2015 Alfa Romeo 4C
I met the 4C at Chrysler’s Chelsea Proving Grounds in Michigan at a makeshift autocross track setup on a skidpad. Our time together was limited. However, it will be fondly remembered.

While 1.75L of displacement from a 4-cylinder engine doesn’t sound impressive whatsoever, the all-aluminum powerplant in the 4C is absolutely explosive, especially after giving the diminutive Italian some revs. Off the line, the 4C will bog slightly, but everything comes alive after the boost builds up 30 feet down the road.

The sound coming from the exhaust sounds like the angels in heaven formed a death metal band. It truly is a glorious sound and one that needs to be heard in person to be appreciated.

Besides the engine, the 4C is constructed using a carbon fibre and aluminum-bonded tub to keep weight down. It may not be as light as an Elise (and for North America, it gains a couple hundred pounds versus the European version), but it has a little bit more civility. Little bit is the key descriptor here. The 4C still packs a punch worthy of professional boxing.

The surface of the skidpad really limited our ability to evaluate the 4C’s suspension from a ride quality perspective. However, the coned autocross track did allow us to see how well the 4C performs.

Considering this particular Alfa doesn’t have power steering, it’s incredibly easy to turn. Steering is quite weighty, though not to the point of strain while in motion. And everywhere we pointed the 4C, the Italian was more than happy to obey, like a loyal hyperactive puppy that has the ability to pay attention.

Unlike some other hard-as-nails sports cars, the Alfa is also fairly forgiving. At one part of the autocross track consisting of a large radius right-hander, the 4C was more than happy to give me a little bit of drift without a ton of effort. When the car did decide enough was enough with my right foot, it communicated it quickly but manageably and allowed for an equally quick correction before continuing on without after-drama.

If you do get a chance to put the Alfa Romeo 4C through its paces, this is the place to do it. Every retail sale of one of these cars should include a membership to the local autocross club.

Inside and Out of the 2015 Alfa Romeo 4C
If you don’t think the Alfa Romeo 4C is one of the sexiest vehicles to be produced in the last 20 years, I have the number of a good eye doctor. It’s drop dead gorgeous, more so in person than in pictures.

Its dimensions are small. Two seats, an engine behind you, some curvaceous carbon-fibre bodywork, and some trick technology to keep everything moving quickly are all you get and all you need in a car like this. The 4C’s rear haunches are athletic but voluptuous, and the front is nearly as wide without looking like a time attack special. Also, the powers that be at Alfa Romeo fixed the only issue with the car before it comes to North America: the headlights.

When the 4C was first shown in production trim, Alfa decided headlights resembling tarantula eyes would be a good look for the svelte sports car. However, they came to their senses and replaced those lighting units with ones that use a full, clear lens.

Getting into the 4C is never going to be a classy affair. One must use a modified version of the Lotus entry/exit technique to access the Alfa: butt first then swing your legs in one at a time. It’s a small price to pay for nimble performance.

Once inside, the interior provides the necessities: seats, a steering wheel, controls, and not much else. You do get some infotainment, but not on a level to which you may be accustomed. Other than air conditioning, leather seating, and a couple other odds and ends, the 4C is far from luxurious. This car is really aimed at those who take minimalism somewhat seriously without being religious about it.

Bringing it all together, the 4C is a furious Italian with the looks to match its performance and vice versa, in a package that’s easily worth the asking price.

Comparing the 2015 Alfa Romeo 4C
The 4C is really in a class of one. Though, if you really need to compare, the Porsche Cayman is available or you could take a look at one of the very few Lotus Elise models that exist north of the border on the used market or our own Lotus Exige. 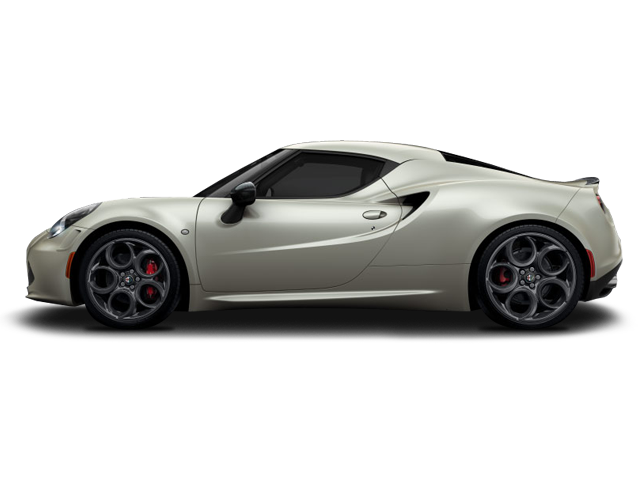 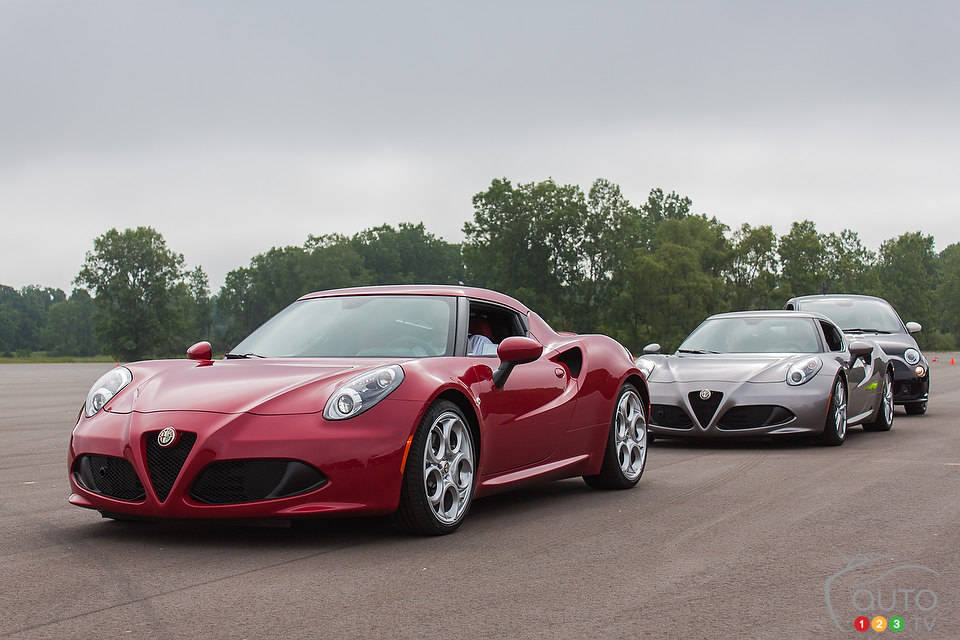 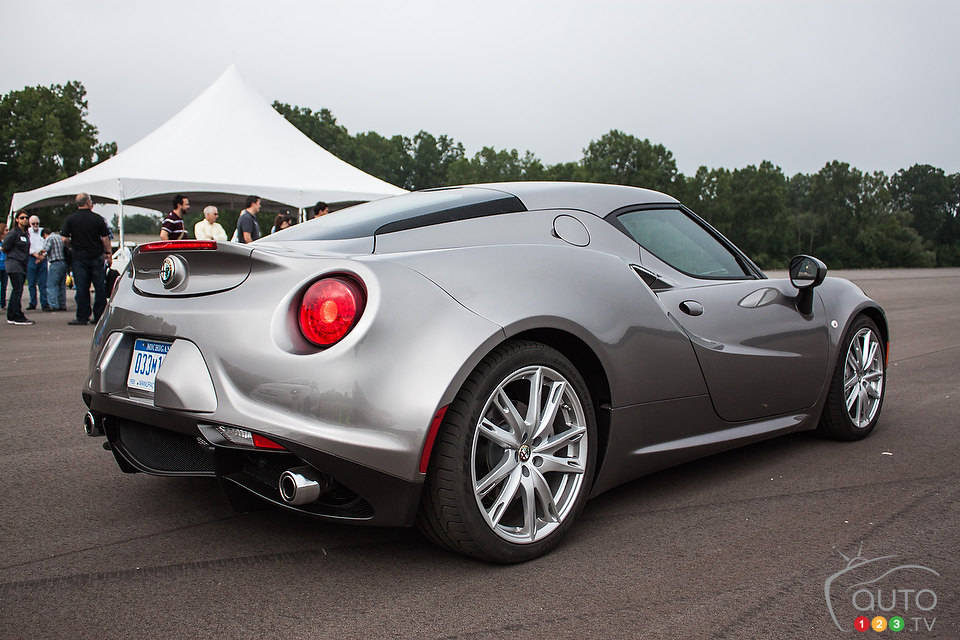 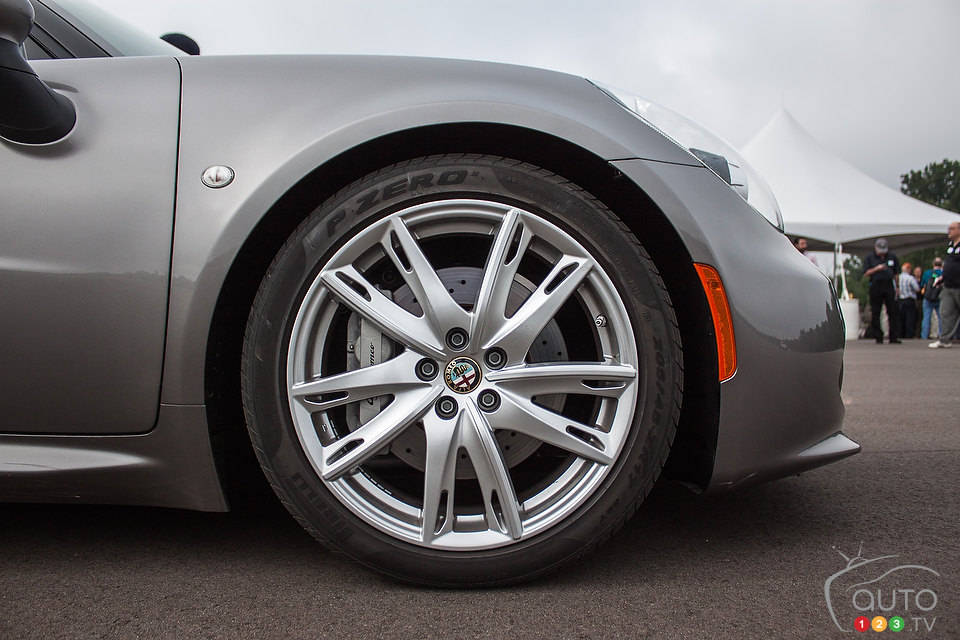 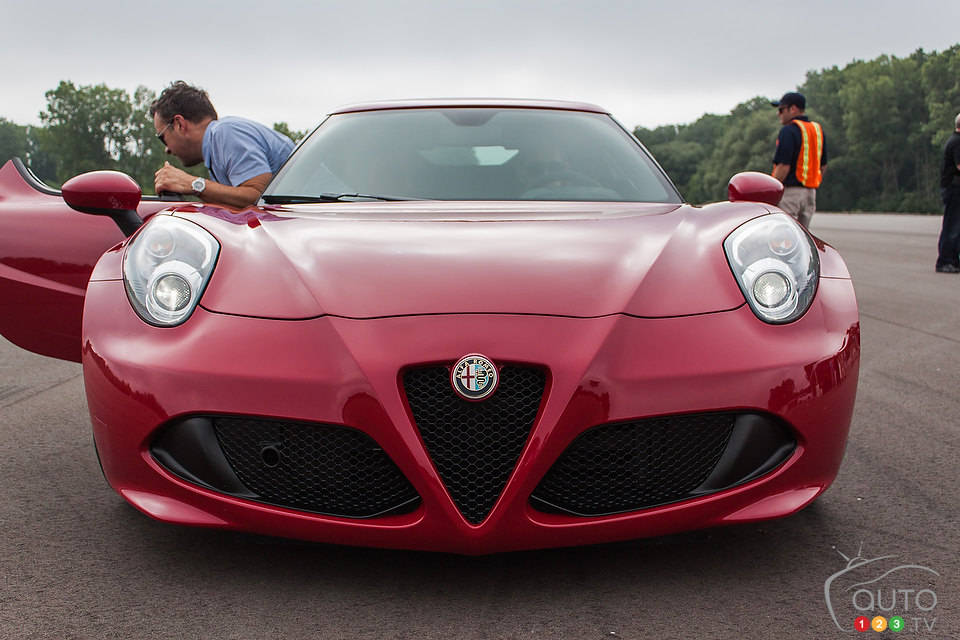 The Civic is a bestseller for excellent reasons. It's a good Canadian habit to support.

The Pony car battles rages on. Ford's taken a turn towards a higher-end feel.

The R/T Scat Pack Shaker Challenger is all about emotions and pleasure. I love it.