Much like Gucci handbags (oh, yes, there’s a Fiat 500 Gucci Edition) and GQ Magazine (there’s a Fiat 500 GQ Edition, as well), Italy’s Cinquecento is an expression of one’s visual tastes more so than performance desires, compromising just about everything in the name of form over function.

However, there’s been one exception to Fiat’s four-wheeled fashion-oriented family: Abarth.

Yet, even with all this performance goodness, the Fiat 500 Abarth has always missed something that’s completely counterintuitive to their fashion-minded trend-setting customers: an automatic transmission.

What is the Fiat 500 Abarth?
A fashion accessory with wheels, the 500 is predominately sold to women (about 70% of Fiat 500 sales are to female customers) and to grow sales means keeping this ever-important group happy and wanting more.

When the Abarth was launched, it was a manual-only affair, and mainly aimed at those with a performance mindset. The problem was, those looking for a performance car weren’t taking the Abarth seriously. With its soft design and cutesy proportions versus other hot hatches, it didn’t resonate well with customers who may buy in this segment.

One group it did grab the attention of was women looking for something a bit more special than a Fiat 500 Turbo. However, many of those customers balked at the idea of having to row their own gears.

Enter the Fiat 500 Abarth with an automatic transmission, new for 2015, and available in both hatchback and cabrio body styles. It’s the Abarth that potential customers have wanted all along.

Driving the 2015 Fiat 500 Abarth
Instead of just dropping an automatic transmission in the hot Italian microcar and calling it a day, the engineers at Fiat did some tweaking to the Aisin-supplied automatic cog swapper, along with manipulating its shift programming to give the car certain Abarth-esque characteristics.

Automatic-equipped Abarths are mated to the same 1.4L MultiAir turbocharged 4-cylinder engine as manual models. However, it does provide a different level of power. At the sacrifice of 3 hp, the automatic gains 13 lb-ft of torque, while also getting an extra cog in its box of gearing (the manual is only a 5-speed, while automatics get six ratios).

That extra bit of torque is needed, as the automatic transmission isn’t one of the newer dual-clutch offerings used on other performance cars. Instead, the transmission is a traditional torque converter unit (though Fiat added more clutch plates and stronger gears) that delivers power from a standing stop in a much softer way than its dual-clutch automated manual counterparts.

While full-throttle launches with the manual-equipped Abarth can easily turn into angry little smoke shows, the automatic plants just enough power down to get the car on its way without all the squeal-y, smoky drama Abarth models are known for. This is good for your pocketbook, as you won’t need to replace tires every few weeks, but it also takes some of the expected lunacy out of Fiat’s mad hatchback.

Once you get moving, all the little adjustments to the shift programming start to make sense. Engineers attempted to make the automatic feel as much like a manual as possible without resorting to hooking up a clutch pedal.

Fuel-cut upshifts give drivers an abrupt kick to the backside as the Abarth accelerates through the gears. Gear holding is also introduced -- for cornering and other conditions -- making the slushbox stay in the exact gear you want without having to resort to manual mode on the stick.

(Oh yeah, if you want to shift this slusher for yourself, the stick is all you can use. Paddle shifters are incompatible with the 500’s steering wheel.)

Yet, even with all these trick changes to make the automatic feel like a manual, it makes you wonder if giving the Abarth a dual-clutch automatic, with all these sensations intrinsically built in, would have been a wiser choice. That is if packaging would have allowed it.

Even with all my slight criticisms, the new automatic Abarth is a blessing to us gearheads as much as it is to those who want a sporty hatchback without three pedals. The more of these cars Fiat can sell, the more they can build, which makes a stronger case for other performance-oriented Fiats in the future.

Inside and Out of the 2015 Fiat 500 Abarth Automatic
Sitting inside the automatic-equipped hot 500 is exactly the same as its manual brother, though for 2015 there are some upgrades across the range.

Firstly, the Abarth now gets a new instrument panel with customizable screens. When the angry Italian is put in Sport mode, purpose-developed graphics are shown to the driver providing more performance-oriented information.

Also, the centre console has been slightly reworked to include a new cup holder design and add a new, additional USB port. Bluetooth audio streaming is now standard as well, making you wonder why they bothered with the additional USB port in the first place.

Other than those small changes, the Fiat 500 Abarth, even with its new automatic transmission, is virtually the same as the old one.

Comparing the 2015 Fiat 500 Abarth
When it comes to fashionable microcars with performance credentials, the Fiat 500 Abarth shouts not-so-nice Italian words at Britain’s MINI Cooper JCW and JCW Convertible. If you open your eyes a little wider, the Ford Fiesta ST, Hyundai Veloster, Nissan Juke NISMO, and Volkswagen GTI all slowly come into frame. 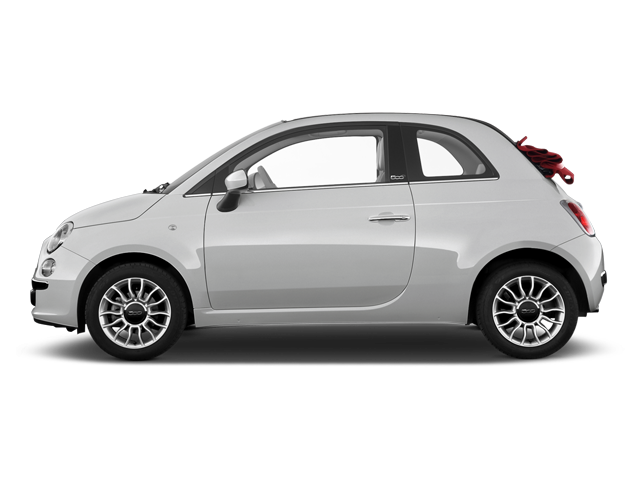 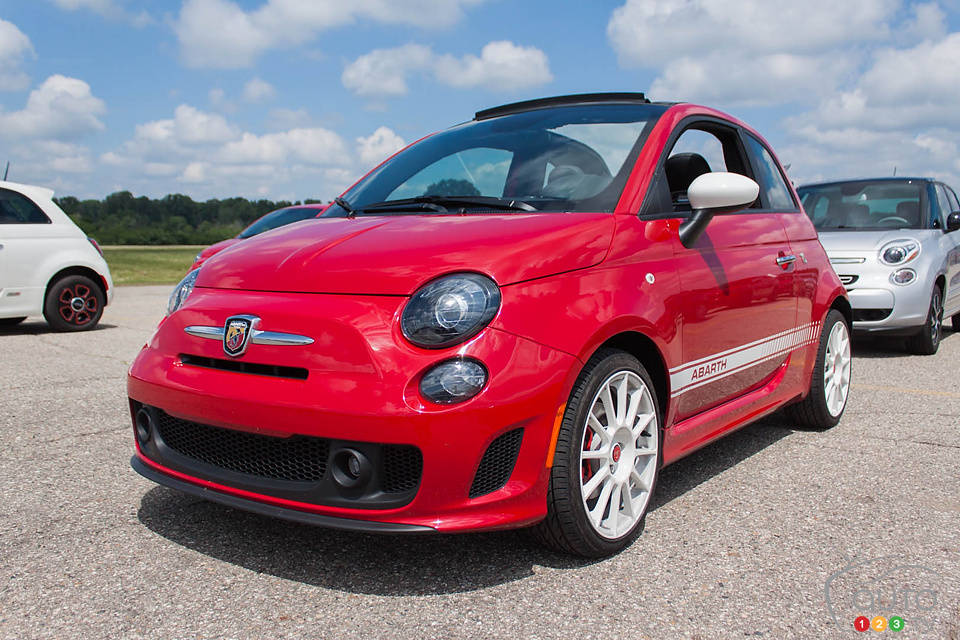 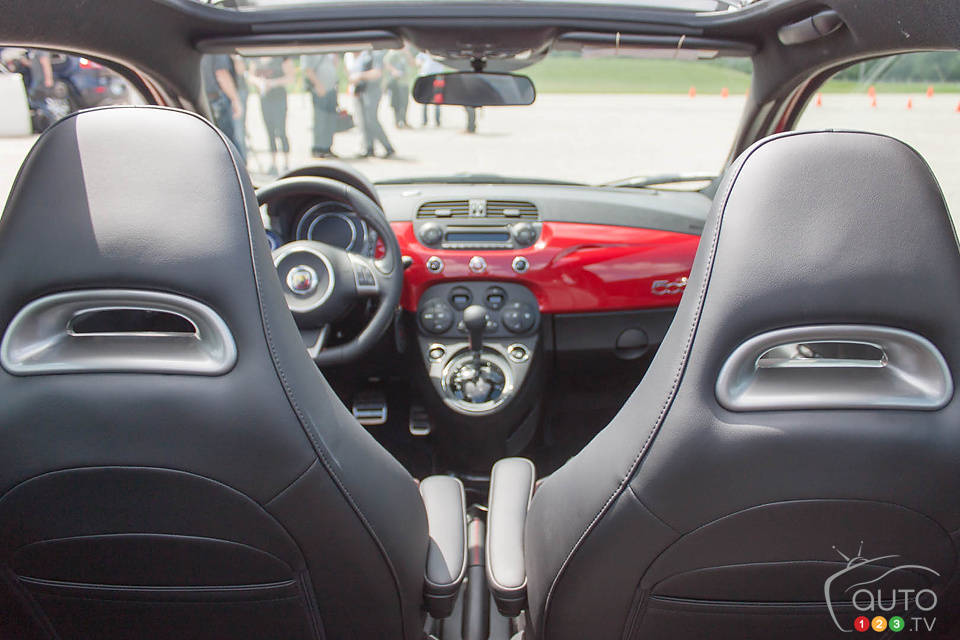 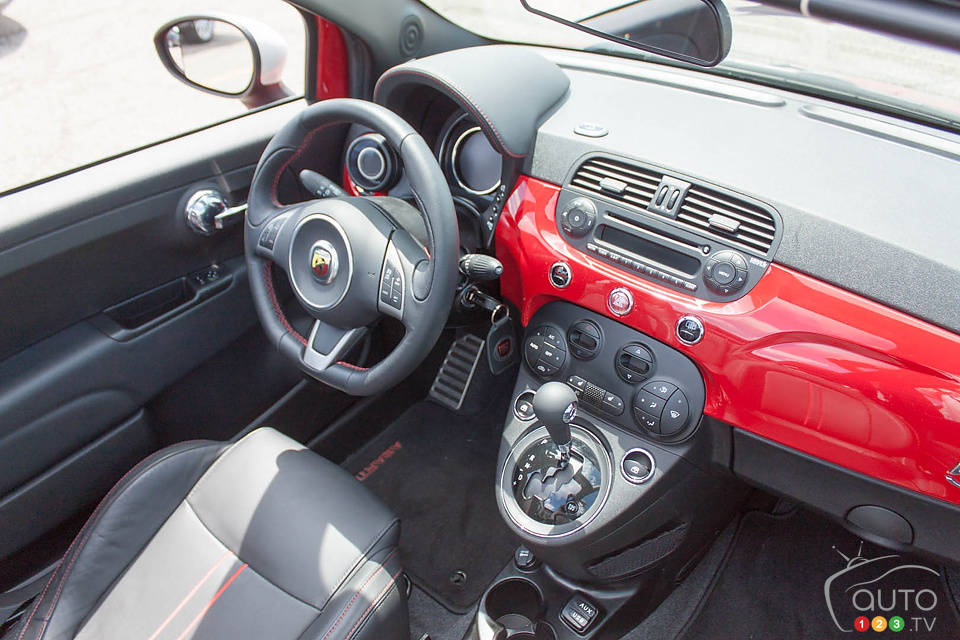 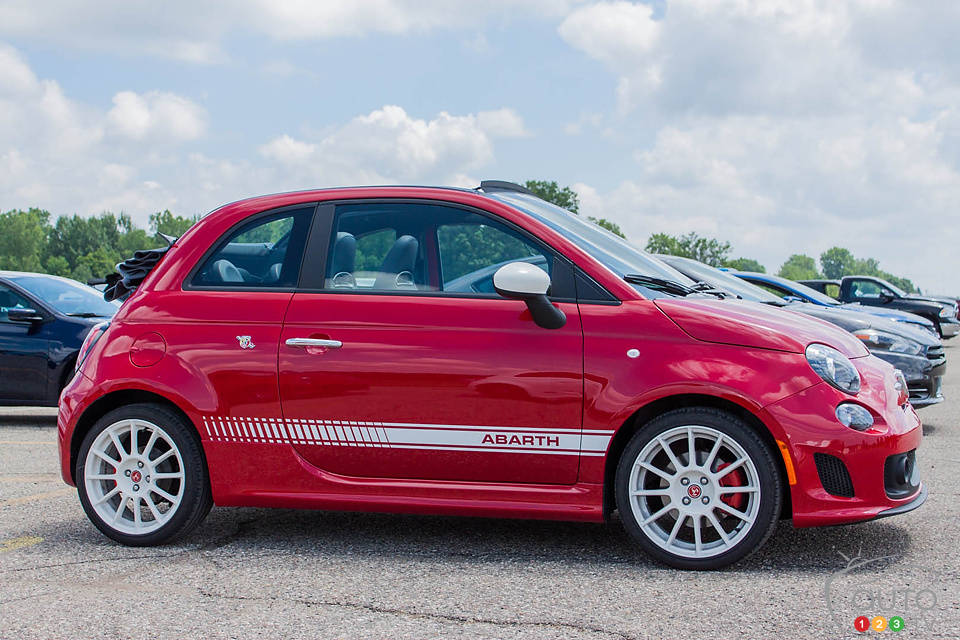 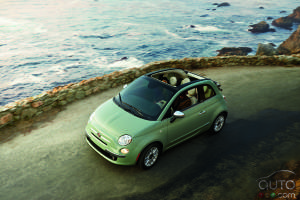 If you’re looking for something a little different, a little quirky and something to sun your self in the warmer months, the Fiat 500c is just the car for you.

Who says a two door convertible can't be a fun family car? The new 2015 BMW 228i xDrive Cabriolet is just that and a bit more. Check it out on Auto123.com.

The Mustang GT convertible is fun in the sun, with lots of pony-car pizzazz to go along with it. Hop in and feel the wind in your hair.