You'd think you were back at the tail end of the 60s, in the heyday of muscle cars and especially ultra-powerful pony cars. At a time when the Mustang was starting to make itself an all-time legend, manufacturers were competing against each other by dropping large and increasingly powerful engines under the hood of their cars without paying much attention to handling and braking. The result was the Mustang Shelby GT 500 KR, the 'Cuda AAR, the Camaro SS427 and others. All of those cars had in common that they performed very well on the racetrack.

You might think this age is officially bygone, these days. And yet, there, around us, are the Mustang Shelby GT500, Camaro ZL1 1Le and Dodge Challenger Hellcat, cars with engines delivering over 500 hp, but with handling and braking that far outstrip those of the Trans-Am racing cars of old.

And, it seems, we’re not done with the mini-explosion of super-powerful muscle cars. Fiat Chrysler Automobiles (FCA) proved that again with the launch of the Charger Widebody. Already last year, we introduced you to the incredible Dodge Challenger Hellcat RedEye, a 797-hp coupe with automatic transmission that's capable of incredible feats on the track. 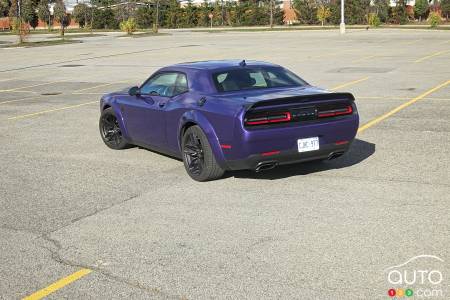 That was a preview of the production version of the car. Today, it's possible to purchase such a car, the manufacturer having confirmed there will be no production limit for the RedEye.

797 hp is all well and good on the track, but can you "live" with that much power in everyday life? That's what we wanted to know recently when we drove an example of this "monster" for a whole week in and around the Montreal area, where the roads have just a wee bit more imperfections than the average racetrack.

And so FCA Canada entrusted us with a Hellcat Plus model fully equipped with the RedEye option. A short history
The original Challenger pony car (there was a Dodge Challenger in 1959 but it was only a bargain version of the Coronet) was sold from 1970 to 1974. There was also a second generation Challenger from 1978 to 1983, but it was just a renamed variant of an affordable Mitsubishi coupe (Chrysler was then associated with this Japanese manufacturer for its smaller, more economical cars).

The third generation Challenger coupe we know today arrived in 2008. From the start, it was based on a platform from a Mercedes-Benz W-production vehicle similar to the one used for the Dodge Charger and Magnum and the Chrysler 300.

The bodywork, heavily inspired by that of the first-generation Challenger, hasn't been modified since then (except for a few cosmetic changes), and there is still no convertible version, a style that was all the rage with the first Challenger models of the 70s. 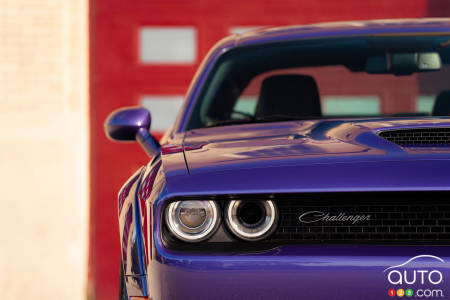 However, despite the fact that the newest Challenger has been in production for over 10 years (with no convertible), it has been a great success on the market, with sales exceeding those of the Chevrolet Camaro in the pony car segment and approaching the sales of the segment-topping Mustang – recently the Challenger has even overtaken that iconic Ford muscle car.

Our test car was recognizable first by its purple "Plum Crazy" paint, another characteristic evoking the 60s and 70s, and by its Widebody body with wing extensions to cover the huge Pirelli P Zero 305/35 ZR-20 tires.

Red Eye
In addition to this, the Challenger SRT Hellcat RedEye can be identified by the red eye of the wildcat silhouette ornamentation on the front fenders of the car. The matte-black hood is topped by two functional air intakes. From the rear, there is no ornament to identify the RedEye version. 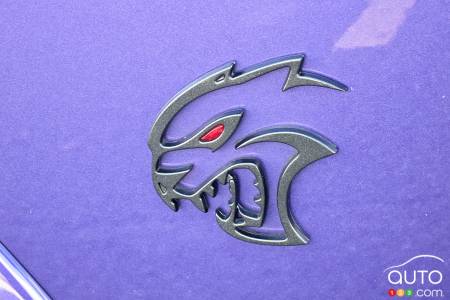 The interior of this Challenger is almost identical to that of the other variants except for the upholstery and instrumentation. The front bucket seats have backrests with SRT lettering and the silhouette of the wildcat embossed in the leather covering. In the back, there's a 50/50 split bench that folds down to enlarge the trunk (which is the largest of the three pony cars on the market, by the way).

The instrumentation is also specific to this SRT package. However, when you press the SRT and Track controls at the top of the centre screen (assuming you have the famous red key that gives you access to the RedEye features), you transform the Challenger SRT into a RedEye, a real race car... and one that’s wholly street legal! 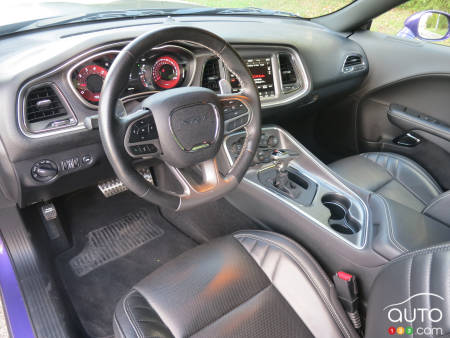 The supercharged 6.2L Hemi engine goes from 717 to 797 hp, the suspension becomes stiffer, the drive-assist systems virtually all disappear, the steering firms up and the exhaust gets louder (drivers can also create their own parameters).

Only the 8-speed automatic transmission is available on this Dodge, but by choosing the Track function, shifts can be done automatically albeit very dryly if the driver lets the electronics upshift these gears or downshifts them by touching the brake pedal. The brakes in question are Brembos on all four of the wheels.

In everyday life
All this was already described during our first track test last summer. But the question here is, how does the RedEye behave in everyday use? First of all, it would be better not to choose the above mentioned track functions. And even then, when you start the engine in the morning, chances are that the loud sound of the exhausts will irritate some of your neighbors! 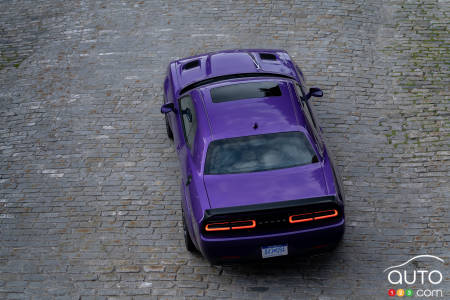 Once the initial momentum has dropped to normal engine idle, this sound will fade away. FCA might want to develop a system similar to Ford's, whose Mustang GTs have a control that allows for starting the engine more quietly.

Once in gear, the RedEye drives like any other performance car, as long as the driver acts accordingly. However, the suspension remains firm, even in the regular position. Visibility is what you expect in the Challenger, with the disadvantages of a slanted rear window. The mirrors are large but they have their limits.

Launch
Reaching the 100 km/h mark can be done in less than four seconds, but to do that you have to use the Launch function, which prevents the rear wheels from spinning (the RedEye only comes with rear-wheel drive). 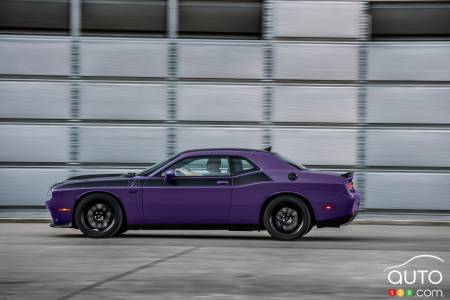 Maximum speed is over 300 km/h... but, as you can imagine, we didn't test drive it on the road. Honest. However, we did evaluate its passing capabilities, and once again, you have to know how to dose the pressure you put on the accelerator because even the traction control can't hold all of the Hemi's power. And it's even more sensitive on wet pavement.

The engine is noisy when accelerating but at cruising speed, the sound is more muffled and conversation is possible in the cabin. If you're making a long trip, it's best to use the cruise control, because of course this thing wants you to go fast. And since not all roads are perfect, if you have to travel on a highway with deep ruts, it's best to keep both hands on the steering wheel because the wide Pirelli tires tend to pull the car out of those ruts, and corrections are required continuously.

Otherwise, the RedEye is a car that handles well considering its size (and its weight of over 4,500 lb). But it is not a car for all seasons - especially not for winter. If you want a Challenger for the cold season, look at the all-wheel-drive GT (although that is only available with the 3.6L V6). 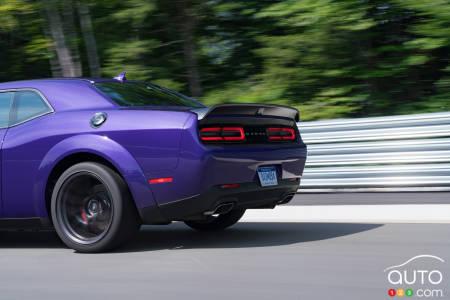 Despite its race-car attributes, the RedEye is relatively comfortable on long drives. In terms of fuel consumption, while most reviewers who've tried it say they dread the frequent stops at the pump, "normal" moderate driving allowed us to register an average of 12.75 L/100 km, while the onboard computer indicated 11.4 for a week of trips including... a few little follies. Obviously, the engine prefers super gasoline to other types of fuel.

To say that the Challenger SRT Hellcat RedEye is the ideal vehicle for everyday life would be wrong. But if you're looking for a (very) high performance car for certain "sporty" outings, it would be an interesting choice. The price: back to reality
However, it will cost a lot to get the Hellcat RedEye. The one we were given had a base price of $75,945, to which you add $18,000 for the 27Z package specific to the RedEye version and $8,000 for the Widebody styling of the body.

The karman/kardon sound system costs close to $1,500, the Laguna leather upholstery $2,195, the glass sunroof $1,425, the Barracuda rear spoiler $875, the satin black hood $1,500 and the more-luxurious interior $2,300; then you add a few extra bucks for other options like driving aids, automatic transmission (mandatory), red seatbelts, black-painted brake calipers and more. 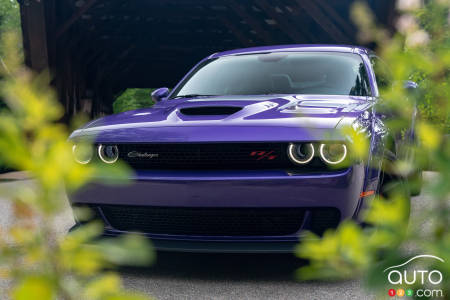 Understandably, even though FCA is announcing that there will be no limit to the production of the Hellcat RedEye, at this price, there won't be a mad rush to Dodge dealerships to get such an expensive car. On the other hand, there’s a good chance this will eventually become a collector's item that, might not only have provided its owner with a thrill but may also increase in value, this Dodge being FCA's most obvious response to the Mustang Shelby and Camaro ZL1 1Le. 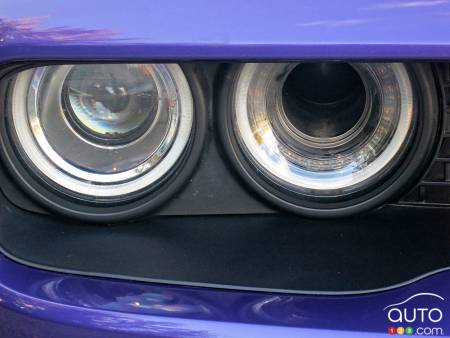 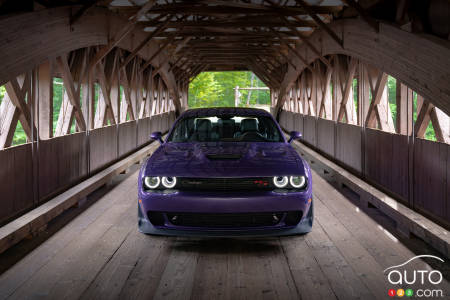 Here's our first drive review of the incredible SRT Hellcat Redeye version of the 2019 Dodge Challenger. Its 6.2L HEMI supercharged V8 delivers (hold on to y...

Dodge continues to add variants and new features to its Challenger model. One thing we know the 2019 SRT Hellcat variant will get for 2019 is a hood with dua...