The fashion at many automakers these days is to take an SUV and, with a slight redesign, put it back on the market as a 4-door sport coupe. Volkswagen is no exception and offers us this year an Atlas Cross Sport with a revised rear end (with mixed results) and a more-winsome front end that looks very much like the regular Atlas. The overall result is visually satisfying. To wit, we got several looks during our week-long test drive of a range-topping $54,495 Execline version.

Outside
The Cross Sport is, as mentioned, adapted from the 2020 Atlas. It retains the same wheelbase, but it shrinks by 144 mm thanks to the different roofline. The roof is 59 mm lower and ends with a sport coupe-style angle. The front end of the vehicle is, all in all, pretty attractive with an aggressive face, nicely designed headlights and two huge air intakes under the headlights. This gives the sport coupe SUV a pretty face, one distinct from that of the Atlas. 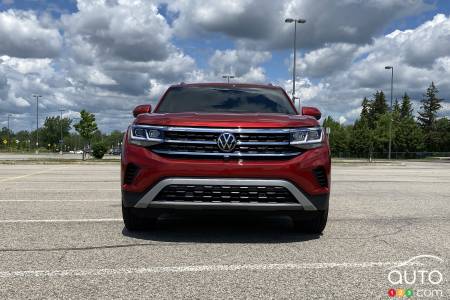 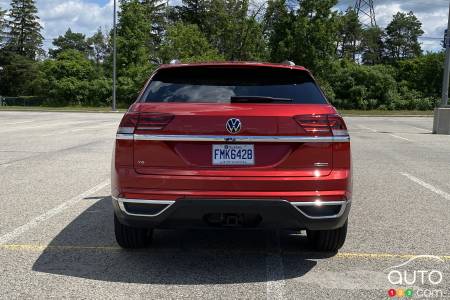 The rear end is less charming; in fact, it feels like the designers were in a hurry to cut it off sharply and plonk on to it elements lying around the studio floor. As proof, in contrast to the stylish headlights, the imposing taillights seem to harken back to the SUVs of the 90s; let’s agree that’s maybe not what you want to harken back to. To create balance with the fake air intakes at the front, Volkswagen also went with fake exhaust outlets at the rear. We could have done without ‘em.

Fortunately, from the side, thanks to the 20-inch wheels and the lowered roof, the impression of a sports coupe is there, so mission accomplished. 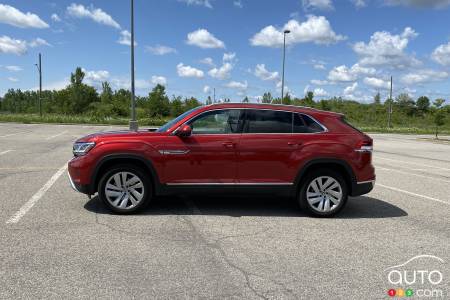 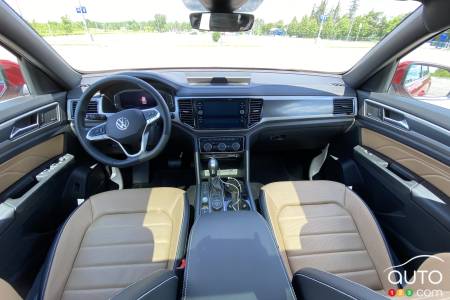 Inside
Nothing changes compared to the conventional Atlas, except of course for the absence of the third row of seats. The interior is very well-appointed, and the door panels are covered with the same soft leather as the seats. The only disappointment is the overuse of low-end plastic for things like the window controls and centre console. Recall that this is a vehicle costing close to $55,000.

Fortunately, pretty much everything else works to dissipate any impression we might have been developing that Volkswagen is out to make fun of us. First of all, there's the large main screen (8 inches) that's easy to use with your fingertips, as well as quick-access buttons to control the audio system, GPS or vehicle configurations.

In the back is where things most change in comparison with the Atlas, obviously enough. First of all, the doors open wide to provide easy access to a bench that's just as comfortable as the front seats. The difference is that you get limousine-like legroom. By removing the third bench seat, VW was able to install the second one in order to offer maximum legroom. Even with a large 6' 5" bumper installed on the front passenger seat, a 6' 2" occupant could sit directly behind it without running out of room. This is not possible with many vehicles. 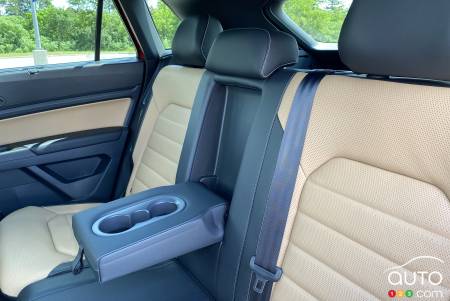 The removal of the third bench seat also translates into a trunk so generous it could serve as a wardrobe for Lady Gaga. With 1141 litres at your disposal, you can easily accommodate all the luggage of all your passengers. Of course, the angled glass of the tailgate could prevent you fitting in certain bulky square-shaped objects. If this happens, passengers in the rear seat can be asked to get out so you can fold down the rear bench and benefit from the enormous cargo volume of 2203 litres. Let them take the bus...

The engine
To move this sport-coupe-style SUV about, our Execline version is equipped with a 3.6L V6 developing 276 hp and 266 lb-ft of torque in tandem with an 8-speed automatic transmission. The other engine offered with the Trendline and Comfortline versions is a turbocharged 4-cylinder making 235 hp and 258 lb-ft of torque. It’s mated to the same gearbox.

The difference in power between the two engines is not huge, nor is the driving experience: our V6 version was very smooth. The transmission is as discreet as a butler for the Royal Family and the gear changes are very smooth. The other advantage of the V6 engine, in addition to the smooth sound it emits, is that it can pull up to 5,000 lb, compared to the 2,000 lb possible with the 4-cylinder. We didn't have the opportunity to test the Atlas Cross Sport equipped with that mill, but I imagine that thanks to the turbocharger, starts are a little more dynamic than with the V6. 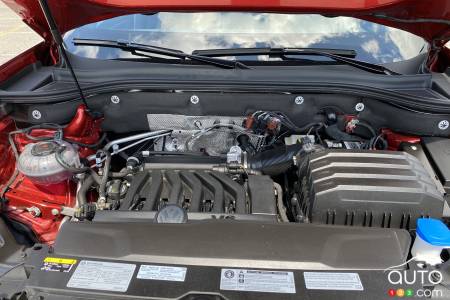 Fuel consumption averaged 13.9L/100 km during our test drive. Fortunately for our budget, many of our kilometres were driven on the highway, which allowed us to reduce this figure to an almost acceptable level. In the city, it was around 16.0L/100 km. That’s pretty atrocious, and it’s due mainly to an aging engine that doesn't really have a place these days in the Volkswagen family, which mainly focuses on 4-cylinder turbocharged engines.

Conclusion
The Atlas Cross Sport drives very well, is very comfortable and is pleasant to use on a daily basis. One of its greatest assets is without a doubt its interior volume. There’s ample space everywhere in the vehicle, front and rear, down low and up top, and of course in the huge trunk.

This vehicle is available in Canada starting at $38,995 in the Trendline version, which, although it doesn't offer all the features of the top-of-the-line Execline variant, still allows you to take advantage of all that interior space and the model's athletic silhouette. These are two of the major assets of the Atlas Cross Sport.

Its main competitor in this segment is the Honda Passport. Having driven both, we would lean towards the Atlas Cross Sport for its dynamic and sporty look, despite a shorter warranty than the Japanese competitor. 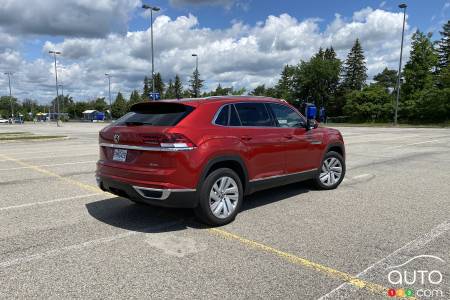 Honda Passport
Nissan Murano
Volkswagen Atlas (for $36,740, you have a third row of seats) 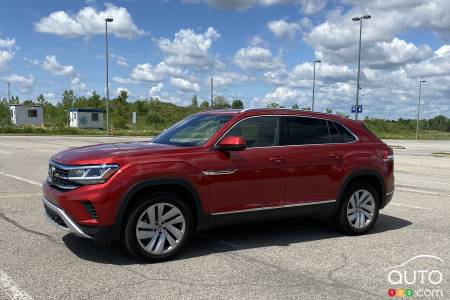 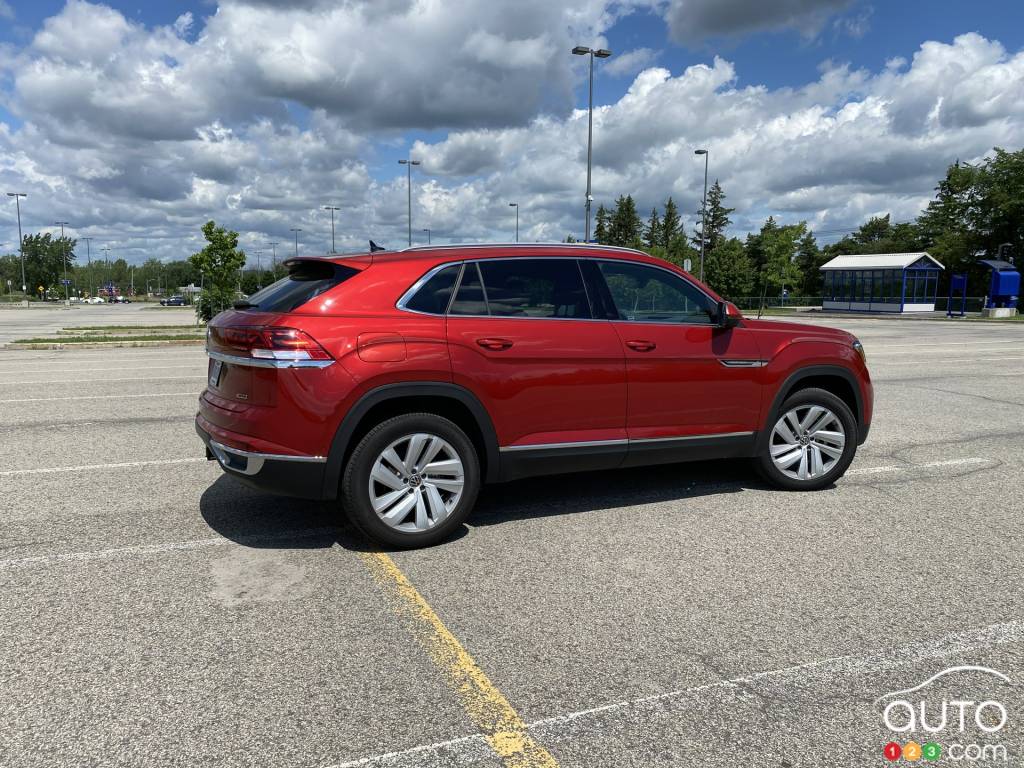 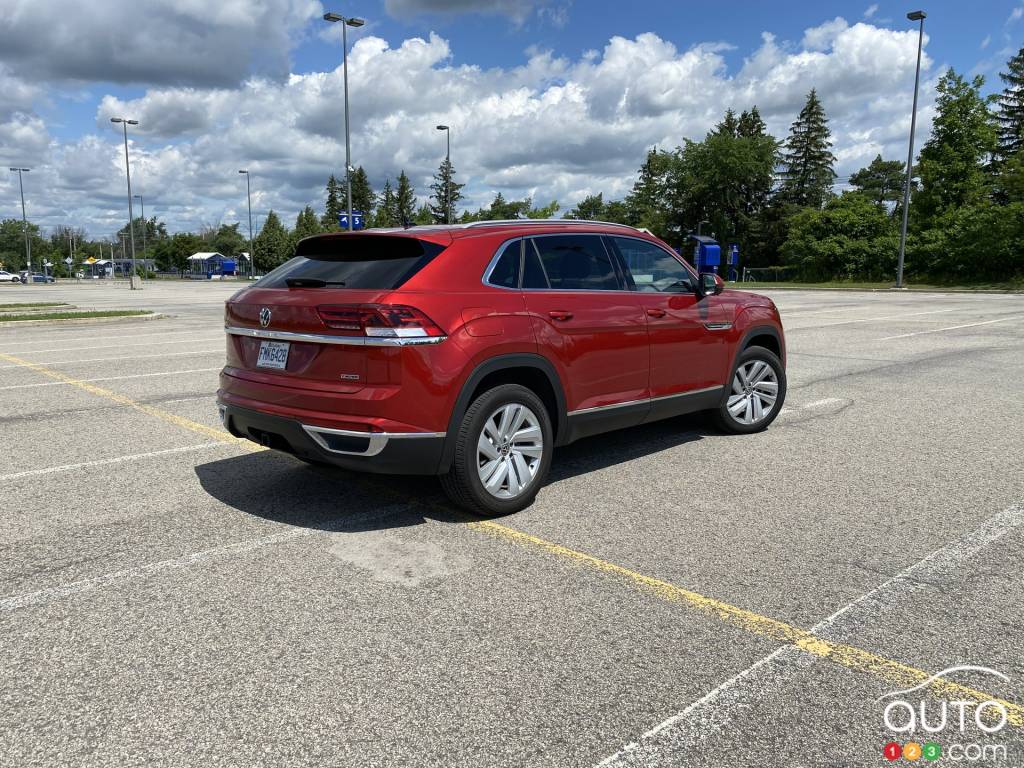 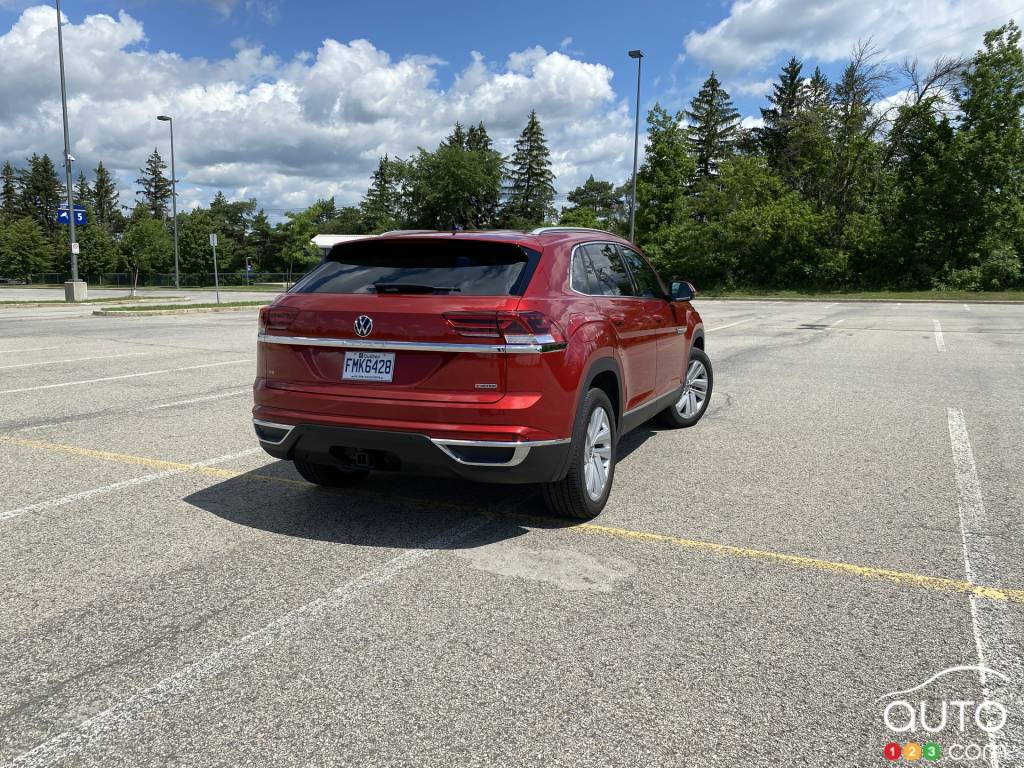 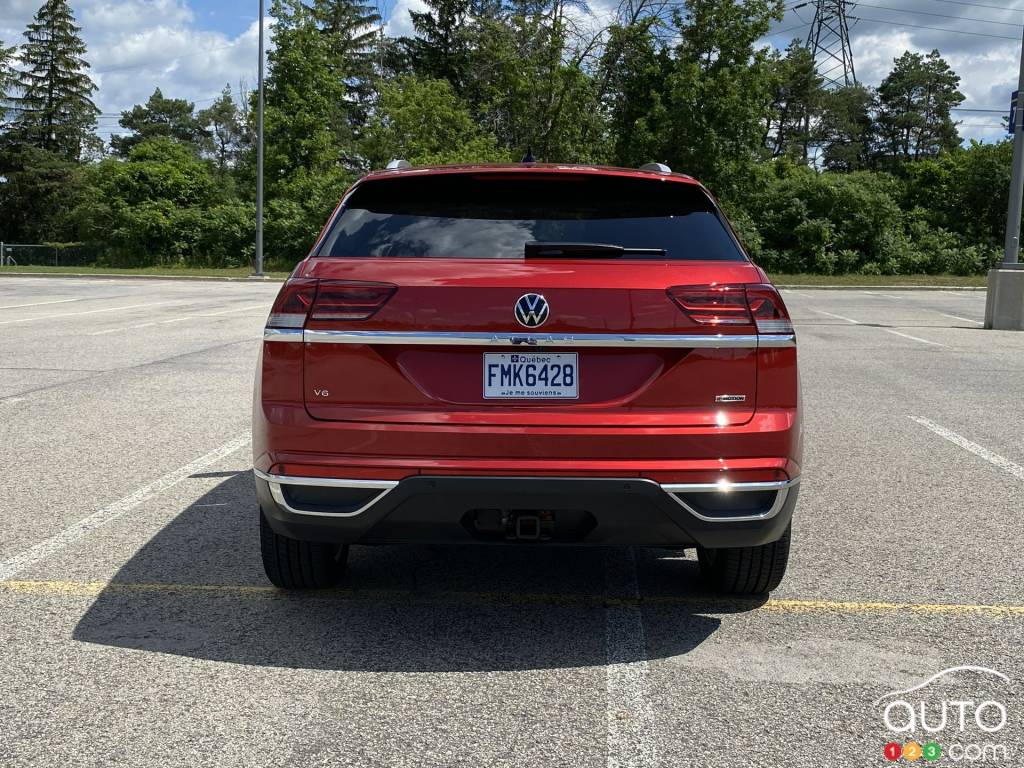 For those who don’t need a third row of seats, the 2020 Volkswagen Atlas Cross Sport is a new option in a growing segment. Here’s our first-drive review of t...