SUVs continue onwards in their march to conquer North America, seemingly unstoppable. And because bigger is better on our continent, each new generation of utility vehicles seems to gain in size and weight.

On the one hand, you have Subaru offering a new Forester for 2019, turning it in the process into the largest in the history of the model. The wheelbase is longer by 30 mm, and the new platform allowed Subaru to design a larger hatch in the back. A power tailgate is offered as an option and all the doors of the car can be locked with one button. Clearly, the prevailing direction for the Forester is upscale.

On the other side, you have a Volkswagen Group that’s in the midst of an offensive of its own to conquer the American market, one utility model at a time. After years of stagnation and a little delay due to a scandal involving diesel engines, VW introduced the revised new Tiguan last year.

The new edition is designed specifically to please American motorists, and it offers an optional third row in an attempt to awaken interest in a model that has never been successful in the U.S.

There is still a shorter version for Europe that has not crossed the Atlantic. Be aware and beware, however: this third row is more for last-resort use. You really have to move up to a midsize SUV model to benefit from a usable third row. 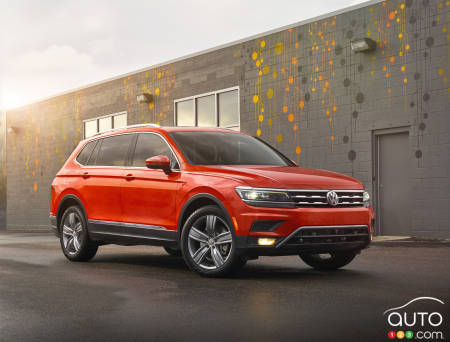 Subaru Forester
The debut of this four-wheel-drive square box dates back to 1998, and the most recent generation arrived in 2014. Over the past five years, the Forester’s competitors have really upped their game, plus there are more of them.

Subaru has responded by beefing up the body of its popular SUV and adding new safety technologies. Specifically, I’m referring to DriverFocus, which uses face-recognition software to monitor driver fatigue and distractions, and then works with the EyeSight active safety suite to reduce the risk of accidents. Other safety features include standard LED lights on all models.

A new interior offers a choice of 6.5- or 8.0-inch touchscreens, front seats designed for comfort on long journeys, a more-spacious second row and a wider rear door sill. 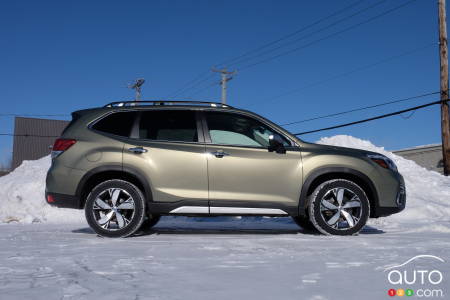 Beneath the evolved styling of the Forester’s exterior sits a new version of the Subaru 2.5L 4-cylinder engine making 182 hp and 176 lb-ft of torque, which represent increase of 12 hp and 2 lb-ft  of torque. The only transmission is a CVT that can be optioned with a manual mode simulating a 7-speed gearbox. Those who want more performance will feel aggrieved that the turbo engine of the defunct XT models has been removed from the product offering, and that there’s nothing to indicate its return any time soon.

Recognized for the efficiency of its all-wheel drive, Subaru offers in the Forester an X-mode terrain management system that allows the driver to adapt the performance of the vehicle to snowy and muddy conditions. The base models are entitled to a more rudimentary version of that system that optimizes traction on slippery surfaces and steep slopes.

The "symmetrical" 4WD configuration also benefits from standard torque vectorization that, in addition to routing power from the front to the rear axle, also shares this power between leftside and rightside wheels for optimal handling. Subaru is wisely making use of one its major assets to go after a wider market share.

Volkswagen Tiguan
The first Tiguan arrived on the market in 2009, and took almost 10 years before VW gave the model a major overhaul last year. Like all recent models of the Volkswagen family, the Tiguan has been redone specifically to satisfy the tastes of American motorists. One by one, we’ve seen models like the Jetta, the Passat and the Tiguan lose their European character to adapt a more Americanized line, to the dismay of many.

It seems, however, that this approach is proving somewhat successful where it counts, in the United States. Good for Volkswagen, but the fact is VWs now have a somewhat flavour-free aura about them, and the Tiguan is no exception. It has become much bigger and much more “North American” (sniff-sniff), right down to an available third row thrown in to the product offering to try to awaken interest in a model that has struggled in the past to find success south of the border.

For 2019, changes are minor following the presentation of a brand-new model last year. Volkswagen has added fabric inserts to the back door of the basic Trendline and leatherette for the Comfortline and Highline models. You also get Apple Carplay and Android Auto applications integrated standard. The digital dashboard borrowed from the model’s Audi cousin comes as an option.

Specifications for the 2019 Volkswagen Tiguan Under the hood, the choice is simple. As with the Forester, a single engine is available, in this case a 4-cylinder turbo delivering 184 hp and 221 lb-ft of torque. This engine is paired with an 8-speed automatic transmission. The basic Trendline version is available with front-wheel drive or all-wheel drive, while the Comfortline and Highline models come in four-wheel drive only. 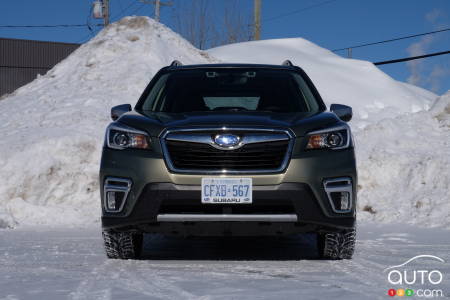 Advantage Subaru
The latest version of the Forester earns new points for its handling on the road. While it’s not necessarily fun to drive, the new, stiffer platform and intelligent use of the CVT transmission make driving this SUV more of a dynamic experience than what the Tiguan delivers. We miss the turbo engine, but this unit does the job. We need also salute, yet again, the all-wheel drive system that gets top marks in this category. Subaru also offers more comfortable seats, better handling, higher ground clearance and active safety. 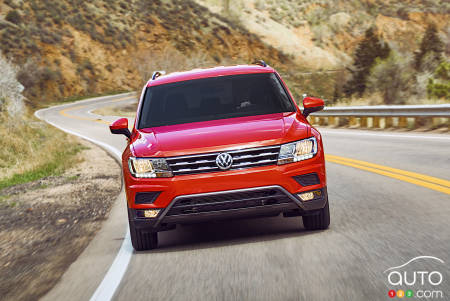 Advantage Tiguan
Those who put a premium on technologies will be better served by the Tiguan, especially with the virtual cockpit and the suite of driving aids, more comprehensive than the one offered by Subaru. You get, for example, adaptive cruise control, lane-keeping assistance, a frontal collision warning system, a convenient birds-eye view camera for parking and automatic high beams.

Similarities
Both models constitute, in their 4WD versions, safe and reassuring vehicles to drive 12 months out of the year. Prices and fuel consumption are pretty similar, as are the interior cabin space and cargo capacity.

Verdict
Our vote goes to the Forester for practical reasons. It offers a better driving position, more comfortable seats, especially at the rear, and a more-inspired driving experience, all while delivering slightly better fuel-consumption figures.

Finally, note that its very efficient all-wheel-drive system and its higher ground clearance make the Forester a vehicle ideally suited to Canadian winters.

Toyota Canada has finally unveiled the prices for the Prime version of its popular RAV4 SUV. The base model starts at $44,990.

Up to five screens in the next Mercedes-Benz S-Class

Long a leader when it comes to new technologies to do with the in-cabin experience, Mercedes-Benz shows no signs of wanting to relent. When the new S-Class d...