INFINITI is bringing back its INFINITI Engineering Academy for a third year, kicking off the event with the opening of the registration period. Talented young Canadian engineers will vie to be named winner of the competition and experience working alongside Formula 1 and automotive experts.

The winner of the INFINITI Engineering Academy competition will be announced during Grand Prix Week in Montreal this coming June, and he or she will join with six other winners from across the globe to work with INIFINITI engineers as well as the Renault Sport Formula I team. Registration is open as of today.

Accepted candidates will participate in “ground-breaking research into decision making in engineering, and how the very best engineers perform under pressure to make decisions when faced with vast amounts of complex data. The learnings from the research will then be incorporated by both the INFINITI engineering and motorsport teams to optimize their decision-making processes”, according to the official announcement by INFINITI Canada.

This stage of the Academy will be led by Harvard University professor Dr. Julia Minson, a specialist in decision science, in partnership with INFINITI Canada. Dr. Minson and her team will also support INFINITI during the Engineering Academy recruitment process and assist the judges during the final to help ensure that the best winner is selected.

Once the different stages of the selection process are completed, the finalists will go head to head in a typical automotive sport environment: trackside at Circuit Gilles-Villeneuve in Montreal. There will have access to the pit lane, garage and motorhome areas on the Thursday before the Montreal Grand Prix; there they will carry out several challenges under the expert eyes of members of the Renault Sport Formula One team, including Chief Technical Officer Bob Bell and team drivers Nico Hülkenberg and Carlos Sainz.

Not only is this program highly innovative, it represents a unique opportunity for young engineering talent who might otherwise feel the rarified world of Formula One racing is beyond reach. The Academy provides a vehicle for experts to witness their abilities, and open up the possibility of climbing the ladder more quickly in the domain. The company, for its part, is eager to identify bright new automotive talent.

For the first time, the winner of the INFINITI Engineering Academy will be announced at Circuit Gilles-Villeneuve in Montreal during Grand Prix Week. He will inherit the title from 2017 winner, Ontario engineering student Matthew Crossan. 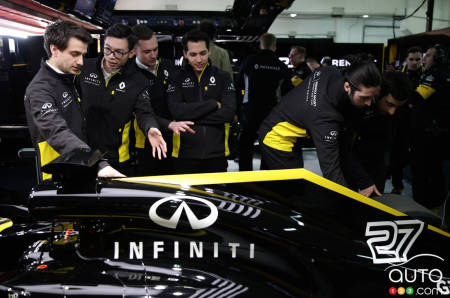 We review the Sport and Red Sport editions of the 2018 INFINITI Q50, an able sport sedan that may not quite rival the Germans but has its own exceptional qua...

Check us out this coming week on Auto123.com. We’ve got the latest news and unveilings, first drives and reviews of the latest models and much more. This wee...

Top 10 Interiors for 2018, According to WardsAuto

Each year WardsAuto publishes a list of what it deems the 10 best vehicle interiors on the market. For 2018 the ranking overflows with bold designs, and acco...