We recently reported on the changes announced for the new 2019 Honda Pilot, which will get a few notable updates for the new year. Today we look at its big brother at Acura, the MDX. Like the Pilot, the big SUV from Honda’s luxury division will benefit from some nips and tucks, for the second time in three years.

At present the details we know have to do specifically with the American edition of the 2019 MDX, but in principle the changes just announced by the manufacturer should be the same for the variants that will hit the market in Canada. A few differences are always possible, however. For the moment Acura Canada has nothing official to say, but promises some soon.

Here’s what we do now, as least as it concerns the American MDX. Let’s assume that most of this will apply to the variants offered north of the border… The star
Having sold nearly one million units since it first launched, the MDX is a flagship model for the Acura division. Which of course raises the stakes whenever any decisions have to be made regarding changes. As the MDX goes, so does the automaker’s fortunes.

The 2019 edition gets a few tweaks that should help make the SUV an even more capable vehicle and an attractive choice for consumers. The attractiveness comes especially in the form of a new A-Spec version, the first time for the model.

The A-Spec gets 20-inch wheels what alter the stance of the MDX, rendering its appearance a fair amount more sporty. In front a more-aggressive shield and body-coloured doorsills are complemented by bigger mudguards, chrome mouldings ringing the headlights and circling the front grille and the windows. A spoiler integrated in the back also helps differentiate the A-Spec variant. Inside, the changes are numerous, and many involve the equipment packages. We should actually be careful regarding these, as it’s often in this respect that Canadian editions most differ from their American counterparts.

Still, we can more or less safely assume that some improvements will be common to both Yankee and Canuck editions, for example new surfaces and finishes, four-way adjustable lumbar support for the front seats and a different configuration for the rear seats that will facilitate access to the third-row bench.

Of the new available colour schemes, five are fully new for 2019. Here again, caution is in order regarding what we’ll eventually have access to in Canada.

Mechanically, the 9-speed automatic transmission is the same found in some versions of the Honda Pilot, and so it gets the same improvements – click here to see what’s in store for the 2019 Pilot. In terms of safety, all versions of the MDX will get the AcuraWatch suite of technologies, which include multiple airbags, active seatbelts, a vehicle stability system with anti-skid technology, electronic brake-force distribution, tire pressure sensors, etc.

As soon as Acura Canada announces detailed info regarding our versions of the 2019 Acura MDX, we’ll of course have those for you.

Distribution of the 2019 MDX has already started in the U.S. and we expect the same to happen soon here in Canada. 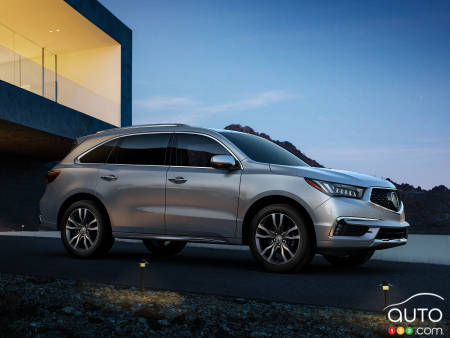 Acura has teased a few images of the next-generation MDX SUV’s interior ahead of the full presentation. The full reveal of the premium brand’s flagship model...