Korean automaker Hyundai is currently in the process of launching its N performance division. We know in fact that in 2019 the North American markets will get the Veloster N version and its beefed-up 275 hp.

In the coming months and years we can expect to start seeing the N badge on a number of Hyundai products. But there’s a caveat: some of those will be true N variants, with heightened performance specs, but others will designate the sporty visual package that can added to the regular model. We’ve seen both BMW and Mercedes-Benz take the dual routes with their M and AMG labels.

The difference, needless to say, is not insignificant.

Take the example of the Elantra GT. According to documents sent to the NHTSA (National Highway Trafic Safety Administration) in the U.S., our market can expect to get an Elantra GT N-Line next year. But this model will not benefit from a different or upgraded engine, or even an improved suspension, in comparison with the regular Elantra GT. Rather the changes will be cosmetic, giving the model an “N-like” appearance.

Going by what we’ve seen with the European variant, the i30 N-Line, the Elantra GT N-Line will get a slightly modified front grille, 18-inch alloy wheels, N-badged sport seats and an exclusive sportier gear shifter.

This version is expected to make its debut at the next Los Angeles auto show, or failing that in Detroit in January 2019.

This means that, for the moment, the Veloster will remain the only Hyundai model to be offered in North America in a true N variant. Public response to that model will likely dictate Hyundai’s decision on following it up with other N models.

Meanwhile, we’re most likely to see more N-Line decorative packages be offered on Hyundai models in the near-future. This is a much safer financial bet for automakers. 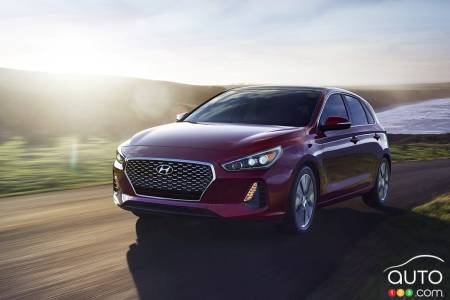