We reported a week ago that Ford was obliged to halt production of the 2018 F-150 truck due to a major fire at the plant of an important supplier of components for the model.

The fire damaged the Eaton Rapids, Michigan factory of the Meridian Magnesium group on May 2nd. The company was forced to suspend delivery of parts to several manufacturers, with Ford being one of the most affected as it impacted assembly of its cash-cow model, the F-150 pickup.

Teams comprised of Ford employees and representatives of other suppliers worked to recover 19 dies from the damaged plant and come up with contingency plans.

The urgency of the situation even compelled the parties involved to have one 87,000-lb die shipped on an Antonov An-124 cargo plane to another Meridian factory… in Nottingham, England!

Door-to-door delivery, accomplished in only 30 hours, we understand.

A lesson in efficiency for our governments, maybe?

Now, dire predictions of several weeks without any new F-150 advancing on the assembly line are proving incorrect. Ford has announced that production is set to restart at its Michigan plant on Friday, with the Kentucky facility to follow suit on Monday. The stoppage will have lasted between 7 and 10 days, meaning that consumers should expect no delays in deliveries of existing or new vehicle orders. 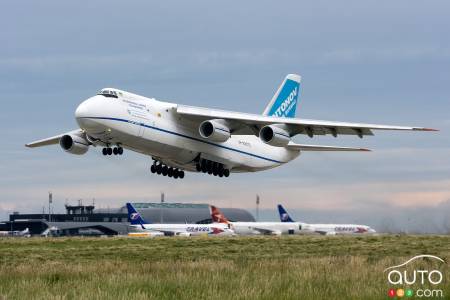