The Frankfurt International Motor Show kicks off in less than a month, and we’re starting to get some early hints at what vehicles will be unveiled at the event. Already Mercedes-Benz has previewed its all-electric EQV minivan; now Hyundai announces it will roll out an EV concept that previews the future design direction of the brand, in particular in regards to its upcoming electric models.

Hyundai also says that the 45 prototype will pay tribute to the very first car produced by the company, the celebrated Pony. More specifically, the image released by Hyundai clearly evokes the Pony Coupe concept car first presented in 1974. 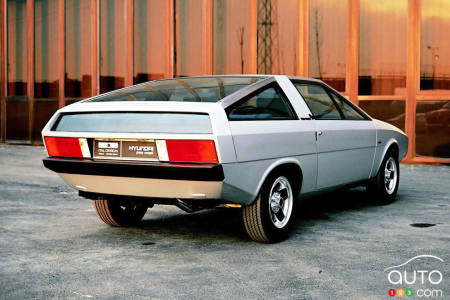 What’s also clear is that the design of the concept is an evolution of the Sensuous Sportiness design philosophy the company introduced in 2018 via the dramatic Le Fil Rouge concept. Here’s how Hyundai describes its approach:

“‘Sensuous’ stands for enhanced emotional values that customers can experience through design, and ‘Sportiness’ is determined to implement those values through innovative mobility solutions.”

The first vehicle to fully embody the new design approach is the 2020 Sonata, first shown at the New York auto show this past spring, and which should debut commercially  before the end of 2019.

Hyundai is more active than most in the field of electric mobility, with the Ioniq and Kona EV already on its roster. The company is also working on producing an electric sports car in partnership with Rimac. Might there be a connection between the latter model and the one that will be presented in Frankfurt? Remains to be seen…

The Frankfurt auto show gets underway on September 10, and we’ll know more then.