Remember the Nano? The microscopic car from Indian manufacturer Tata launched back in 2008, carrying a price tag of just $2,500. After a dozen difficult years on the market, the model as it exists now will be disappearing in 2020, according to its maker.

Though that price tag certainly drew attention to the model when it first appeared, North American consumers can be forgiven for having lost track of the Nano in the intervening years, as the model was only sold at the other end of the globe. It’s clear, though, that the model did not succeed as Tata had hoped.

The idea of course was that a model with such a tiny price tag could not fail to sell like little hotcakes, especially in a market like India, where average pay is low and the majority of the population has no car and can only dream of the independence owning one would confer.

And yet this is not what happened. The car was eventually as forgotten there as it is here, to the point where last month, Tata racked up exactly one sale of the model (compared with 275 June 2017). What’s more, the company did not export a single unit last month; over the same period in 2017, it shipped out 25 units.

The Nano suffered its share of problems right out of the gate when it launched. Some cars caught fire easily, and collision tests laid bare its deficiencies in terms of protection.

At $2,500, though, it was hard – impossible in fact - to beat in terms of price. In 2015, the car did get some improvements, even incorporating Bluetooth, USB ports, power-assisted steering and a large gas tank to increase its puny range. These changes clearly proved to be too little, too late.

An interesting aspect of the Nano’s story is the response given it by Indian consumers. Experts eventually came to understand that, just like buyers everywhere else in the world, shoppers in India didn’t want to be associated with a low-end product.

Many consumers opted to buy a larger, better-equipped used car for the price instead.

The lesson learned here is that consumers want a minimum level of quality, and won’t go beneath it. It’s safe to assume that Tata has absorbed this lesson, and that other manufacturers have taken notes as well.

For all that, an interesting chapter in the history of the automobile will come to an end in 2020 with the demise of this tiny car. The Nano, which Tata had hoped to turn into the Indian VW Beetle, was a victim of changing times and consumer expectations. 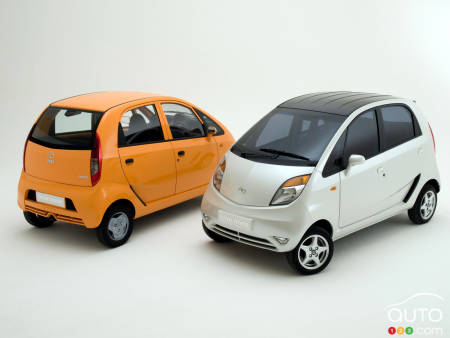 Tata Motors says it is interested in forming a partnership to operate British automaker Jaguar-Land Rover, though it rules out selling the company, at least ...

Hot off the Web: Daniel Craig to drive a Tata Nano in the...

According to the online forum CommanderBond.net and one of its members, sloppy_joe007, reportedly working for Goldwyn-Mayer Pictures, actor Daniel Craig will...

Geneva 2011: Tata looking to conquer Europe with the Pixel

At the Geneva Motor Show, Tata lifted the veil on the new Pixel, an urban car the automaker hopes to conquer the European market with.