Set to debut very shortly, the new Volkswagen Arteon will become the new top dog in the VW lineup, initially in the form of a sedan with a 4-cylinder engine. But though it hasn’t even appeared at dealerships yet, rumours abound that VW is working on some interesting additions to the Arteon product offer.

Two possibilities are currently floating around in the industry: for one, VW is said to be working on a 3.0L V6 engine configuration, which would give the powertrain more bite than the one that will initially hit the market. Word is that the new VR6 engine bloc could deliver close to 400 of those horses.

Dr. Elmar-Marius Licharz, head of product line for medium and full size cars, told British site Auto Express that if the company made a V6 engine, it could also be used to power the Atlas. But he added that its use down the road in the Arteon was being studied, and that this possibility hade bene taken into consideration during the model’s development process.

We can imagine that a V6-powered Arteon would be a natural for the North American market.

The second rumour swirling around the Arteon concerns a possible shooting brake variant, which is also apparently in the works. Here again, Dr. Licharz was unwilling to confirm it, but did suggest he would like to see a wagon version happen.

This second possibility probably has less relevance for North American consumers. The golden age of wagons on this continent came and went many years ago, so this iteration may never see the light of day here.

Never say never, of course; a 4Motion Arteon wagon may well spark the interest of many consumers on this side of the Atlantic. 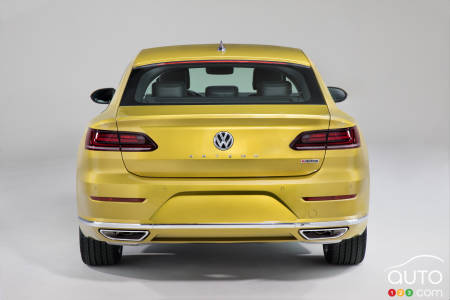 Volkswagen will unveil a five-seat version of its Atlas as well as an R-Line variant of the Arteon at the 2018 New York International Auto Show. These repres...

The Volkswagen Arteon is expected at dealerships this summer, with pricing and trim details set to be announced before then. We expect a heated battle betwee...