Last week we reported on discussions taking place between Rivian, Amazon and GM regarding an investment by the two giants in the fledgling American EV manufacturer. We’ve now learned that Rivian will get a $700-million infusion of funds from the mammoth online sales company.

For Amazon, its interest is of course linked to its own ambitions in developing a system of deliveries carried out by EVs.

Based in Plymouth, Michigan, the Rivian company announced at the same time that GM is not part of the new investment package. There is however one other active party to the deal, and that is a long-time partner of Rivian’s, the Saudi car distributor ALJ (Abdul Latif Jameel).

"This investment is an important milestone for Rivian and the shift to sustainable mobility." 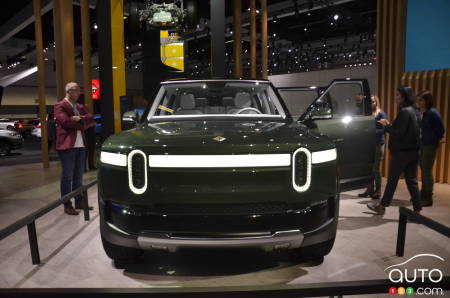 While GM is not part of this initial agreement, it is still very possible that the American automotive giant will partner with Rivian in the future. The discussions that were apparently taking place early last week would have boosted the value of the Rivian company to somewhere between $1 billion and $2 billion.

This is all part of an all-out scramble under way in the electric pickup segment. Other than Rivian, Tesla and Ford have announced their own intentions to develop models - as has GM, by the way.

Rivian declined to provide any details regarding how the $700 million investment would be used. In January the company had also confirmed it was in the midst of discussions with other companies about possibly sharing technologies.

We’re sure to see Rivian enter into more agreements that will make it easier for it to proceed with research and development. For all the parties involved, it’s clearly a win-win situation.

Rivian wants to being its R1T pickup to market toward the end of 2020, with the R1S SUV to follow. Four other products are on the company’s agenda between then and 2025.