The new 2017 Audi R8 V10 plus exclusive edition, which will be officially introduced at the 2016 Los Angeles Auto Show two weeks from now, will mark the debut of Audi’s first production laser headlights in North America.

The German company has been developing its uber-cool laser light technology for many years. How does it work? Each headlight contains one laser module that operates with four high-intensity laser diodes. Each module bundles these diodes into a blue laser beam with a wavelength of 450 nanometers. A phosphor converter then transforms the blue laser beam into a very bright and pure white light.

The laser beam pattern, which is active at speeds of 40 mph (64 km/h) and above, supplements the LED high beam and greatly enhances visibility for the driver by projecting a low and wide beam of light on the road ahead.

The R8 exclusive edition is also the first Audi vehicle to couple the laser light with dynamic front turn signals. 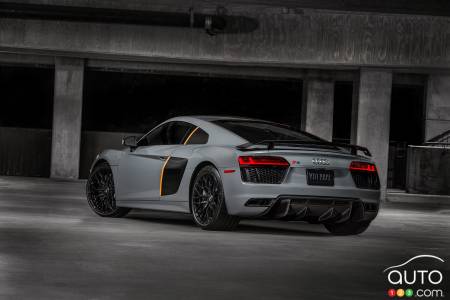 The Audi R8 offered to consumers in 2019 will deliver even more power from its 5.2L V8 engine. Audi is also promising more-responsive steering, shorter stopp...

By introducing a V6-powered version of its R8 sports car, Audi hopes to sell the model in China, where consumers pay taxes based on the number of cylinders i...