Some automotive brands don’t just leave their mark on the asphalt but dip their toes – and their design expertise - in the water. Touching on everything from luxurious sailboats to high-performance motorboats, and in large-scale international events as in humble excursions on the water, their expertise is surprising and remarkable.

Summertime. ‘Tis the season for vacationers to get in their watercraft and raise the anchor, and Auto123.com offers you a look at some boats that will make you dream…

For the past decade, Mercedes-AMG has partnered with the Cigarette Racing team to design high-performance, high-speed motorboats. Unveiled at the Miami International Boat Show this past February, the 50-foot Marauder AMG was inspired by the breathtaking Mercedes-AMG GT R sport coupe.

Mercedes is also the creative force behind the sublime Arrow460 Granturismo:

Porsche’s design studio and the Dynamiq naval shipyard have teamed up to create a first, 35-foot luxury model, sporting a number of automotive characteristics. Only seven of the Dynamiq 115 GTT super-yacht will be built, and each will sell for 12 million Euros (around $17.6 million). 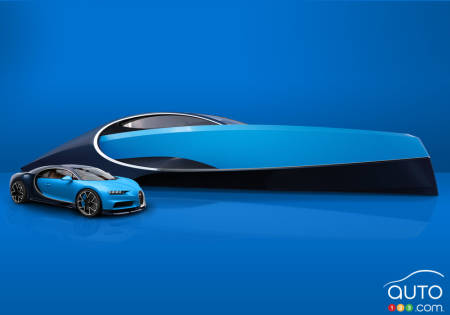 Toyota is a big player in the Japanese yacht market. This Lexus-brand sport-model prototype is as stylish, luxurious and nimble as the LFA supercar.

Aston Martin is famous most of all for its James Bond-driven cars, but last year, the British automaker became a boat designer with the unveiling of the AM37 concept boat, developed in partnership with Quintessence Yachts and powered by two 520-hp motors.

Its famous Ocean Race makes Volvo without a doubt the most visible automotive brand on the water. The 2017-2018 edition will depart from Alicante in Spain and circle the globe before reaching the finish line in The Hague in the Netherlands. The Volvo Ocean 65 sailboats are perfect amalgams of art, science, architecture and shipbuilding.

Taking part in the Vendée Globe, Mercedes-Benz and navigator Alex Thomson of the Hugo Boss team are a fearsome partnership on the water, as they proved with their second-place finish in the 2017 edition of the event:

Land Rover had its own team (Land Rover BAR), led by former champion Sir Ben Ainslie, in the 2017 edition of the America’s Cup catamaran race, which took place this spring in Bermuda. Though victory eluded the team this time, it already plans on returning next year.

Lastly, we should not forget tire manufacturer Pirelli, which has partnered with the winners of the 2017 America’s Cup, Emirates Team New Zealand.

Summer has finally arrived, and brings with it a long line of new car models set to make their appearance soon at dealerships across the country. Here’s our ...