With everyone in the automotive industry working on the assumption that electric vehicles will be proliferating on the market over the next five, 10 and 15 years, we can expect to see battery production plants popping up everywhere.

Today we learned that General Motors (GM) is looking to build a second battery-producing facility in the United States, in tandem with its South Korean partner LG Chem. The Wall Street Journal reported the news, quoting sources closely familiar with the plan.

The companies are reportedly close to finalizing the decision to locate the plant in Tennessee, according to the report. GM did not respond immediately to a request for comment from Reuters.

LG Chem's battery division, LG Energy Solution, did say in a release that it was in talks to make further investments with GM, but could not disclose details. “LG Energy Solution is also planning additional capacity expansion for other global OEMs (original equipment manufacturers) located in the U.S.”, its statement noted.

Previously, GM and LG Chem invested $2.3 billion to build a joint electric vehicle battery plant in Ohio, creating one of the largest such facilities in the world. That plant, to be built near GM's closed assembly plant in Lordstown, will accelerate the company's schedule to introduce 30 new electric vehicles worldwide by 2025. 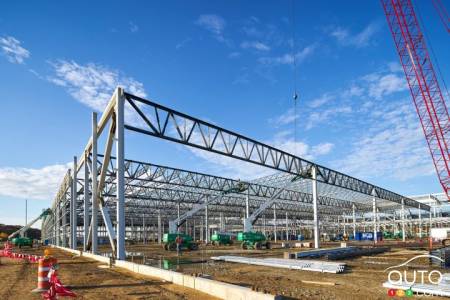 Mary Barra, GM's chief executive officer, said the company is hopeful it will exceed its first annual sales target of one million electric vehicles in the U.S. and China by 2025.

Globally, EV battery manufacturing is currently concentrated in Asia and Europe, while Tesla largely controls production in the United States.

GM Investing $2 Billion to Refit Another Plant for EV Pro...

GM announced another $2 billion investment in EV production, this time to refit its Spring Hill, Tennessee plant so it can build electric vehicles. One of th...