•    Images of the next-gen Lincoln Nautilus appear on a Chinese website.

•    According to Ford Authority, the next model will be built in China and its not clear if it will be offered in North America.

With the power and reach of the Internet, it's increasingly difficult for manufacturers to keep a new model's design a secret. Lincoln has just had another example of this, with images surfacing of the next generation of its Nautilus SUV.

We're not talking about spy shots leaked by an insider or some other enterprising photographer here. Rather, the images were posted online by Chinese authorities. They appeared on the website of the country's Ministry of Industry and Information so that the design can gain official approval.

The Ford Authority website first shared the images, which show a new Nautilus integrating many of the design elements of the Concept Star unveiled last April. The new edition features a larger front grille that extends downwards and is spanned by a thin band interrupted only by the brand's logo in the centre. 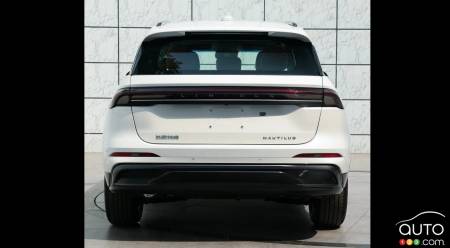 Photo: Ford Authority
The next Lincoln Nautilus - Back

At the rear, the design is similar to that found on other recent Lincoln SUVs. The Chinese characters on the tailgate betray the provenance of the images. Ford Authority also got hold of the model's dimensions, and so we know that the model grows a few mm in length, width and height. Its wheelbase also gains a handful of mm. In all likelihood that means a more spacious interior.

Ford Authority reported as well that the next-generation Nautilus will be built and sold in China, and that it’s not yet known if the model will be brought to North America. Recall that Ford's Canadian plant in Oakville, Ontario, will drop production of the Nautilus and Ford Edge next year to build new versions of the Explorer and electric Lincoln Aviator.

We have an idea of what the next Lincoln Nautilus will look like. It remains to be seen if it will remain in our catalog. At the very least, we've got an idea of the styling trends Lincoln is looking at.

Lincoln to Build Five Models in China by 2022?

Intent on building on its strong growth in China, Lincoln plans to be assembling up to five models in that country by 2022. These include the Aviator and Nau...

The new Lincoln MKX Concept made its global debut at Auto China 2014 in Beijing, marking the first time Lincoln has stepped beyond North American borders to ...

The 2019 Lincoln Nautilus, which doesn’t try to out German the Germans but is all about interior comfort, good tech and sufficient power to get you where you...