According to a report by WardsAuto, Kia is working on adding an AWD-equipped crossover SUV to its North American lineup.

Confirmation came from the mouth of Michael Cole, COO of Kia Motors America, who said that such a vehicle was definitely in the company’s plans for the coming years.

The executive did not let on what form this new vehicle would take exactly, which of course leaves the door open to speculation.

And if we indulge in a little of that, several possibilities make themselves apparent.

For starters, it’s possible the company will finally decide to implant on the North American market the Stonic crossover it sells globally. That model rides on the same platform as the Rio, which does not have all-wheel drive. 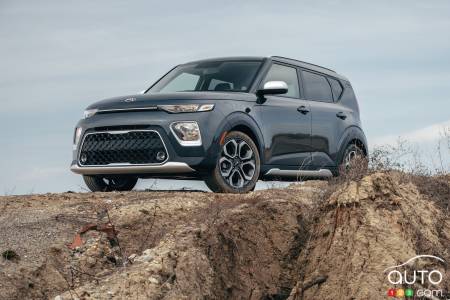 We could also imagine the company producing a close cousin of the brand-new Venue from sister company Hyundai. Although here again, the model is not, for the moment anyways, available with all-wheel drive.

The third possibility is that we could see a variant of the Kia Soul sprout up with power sent to all wheels. As it happens, the Soul shares its platform with the Hyundai Kona, which does comes with AWD.

The new Soul hitting the market this summer is also available with the X-Line visual package, which gives it a more adventurous demeanour. Might this then be the model Michael Cole is referring to as the future AWD crossover in the works for Kia’s North American lineup?

These might of course all be off-base ideas, and perhaps he’s referring to a wholly new model that is currently still just at the drawing-board phase.

Your guesses are as good as ours.

While other models from the “golden” age of boxes on wheels have departed or been transformed, the Soul lives on. We test-drive the new third-generation 2020...