My neighbour took one gander at the 2020 Kia Soul I had just parked in front of the house and told me bluntly how much she hated the look of it (no, please, tell me what you really think!). For sure, visually this car/crossover/whatever is a love-it-or-hate-it proposition like few others on the market, and while some see a lot of charm in its unique, square shape and almost-stubborn refusal to give in to the demands of aerodynamics, others see just a box. With squinty headlights.

Personally I have to admire a vehicle that manages to be completely, effortlessly original in an age when cars and SUVs seem to issue from the same respective moulds. What’s more, despite a marketing campaign that explicitly targets hip, younger buyers, the demographics of those who actually do buy the Soul skew slightly older than the average purchasers of a Kia vehicle. Why does this Soul persistently remind me of Subaru’s nerdy-cool wagons/SUVs?

The 2020 edition marks the third generation of the Soul, and though its look suggests sportiness despite the square shape of the thing, the guts that make it go are new and more designed to be efficient and practical than performance-oriented. There are three basic versions with various iterations in the product offering: the LX, EX, EX+, EX Premium, GT-Line Premium, EX Limited and GT-Line Limited.

Specifications of the 2020 Kia Soul 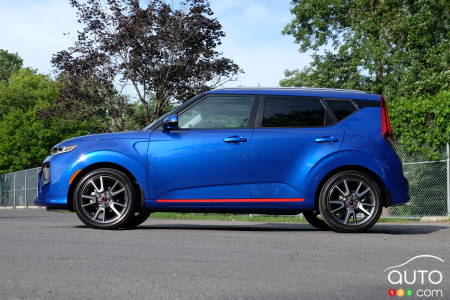 The outside
The Lee Van Cleef-like squint of the headlights and the handsome 18-inch wheels (with the higher trims)  give a nice touch of menace to what might otherwise veer too much to cutesiness, plus the 2020 Soul can be dressed up in the GT-Line appearance package –the GT-Line Limited version was what I was given for the week. Let’s just be clear, though: the Soul doesn’t perform to a level of sportiness equal to the coolness of the GT-Line’s exterior.

The powertrain
The Soul now features one single engine across the range, a 2.0L naturally aspirated unit that delivers 147 hp and 132 lb-ft or torque (output is down slightly from the older 2.0L unit), in conjunction with a CVT, though Kia’s is known as an IVT (intelligent variable transmission). That kind of power and that kind of transmission inevitably results in totally average but totally practical performance, especially for city-dwelling folks. Unfortunately for those folks, there’s no all-wheel drive on the menu for the Soul. 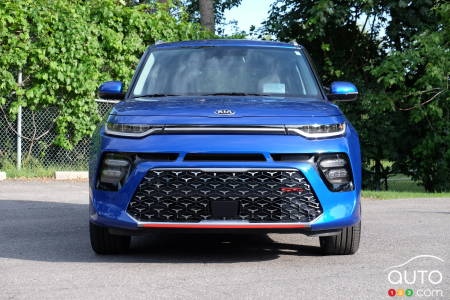 The versions
On the other hand, for what is still a reasonable $21,195 starting price point (though that’s up slightly in comparison with the outgoing version), Kia, as is its wont and talent in recent years, has managed to fit a decent amount of features and tech that make the interior feel more upscale than the Soul really is.

So you get, from the entry-level LX onwards, heated front seats, compatibility with Android Auto and Apple CarPlay (via the standard 7-inch touchscreen) and keyless entry. You don’t, however, get cruise control, which in this day and age would seem almost like a gimme even at entry level. Also, if you want more than the basic safety systems, you’ll have to step up to the EX.

And there, you get blind-spot detection, lane keep assist and forward collision avoidance assist. Also starting with the EX, the steering wheel is heated and leather-wrapped and you get wireless smartphone charging, plus the daytime running lights and positioning lights are LED.

From the EX+ onwards the headlights are also LED, which helps give the car a more upscale appearance. That EX+ also brings with it a power sunroof.

The EX Premium introduces gloss-black leather accents inside, plus dual-zone climate control, plus satellite radio, plus a larger 10.25-inch touchscreen with integrated nav. An auto-dimming rearview mirror is also included at this stage.

Leather seating, heated rear seats, ventilated front seats and a heads-up display are included in the two Limited versions (though for the latter it’s the cheapish pop-up plastic rectangle kind we’ve seen in certain Mazdas; they always strike me as being a careless toss of an object from the back away from breaking. Haven’t had the nerve to try that of course). Get one of the Limited versions and you also get to enjoy a premium 640-watt harmon / kardon audio system. 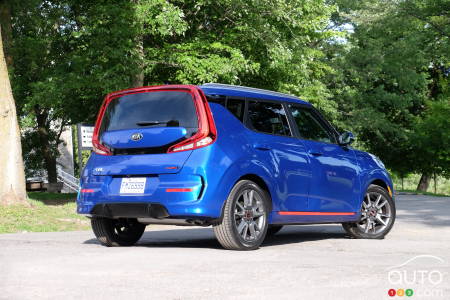 The interior
The first thing you note when getting behind the wheel is that, thanks to that boxy shape, the sightlines and visibility are great, both for the front and back-seat occupants. The interior feels and is roomy, with tons of headroom and an open feel that gives you lots of space to groove to that premium audio system.

Cargo space doesn’t look at first glance to be very ample, but the numbers show 663 litres, which is more than Volkswagen’s Golf for example. The reason it’s deceptive to the eye is that those 663 litres are available when you lower the floor; leave it as is and your cargo capacity is actually 530 litres. With the floor lowered and the rear seats down, that capacity jumps – nay, explodes – to 1,758 litres. That’s better even than the Honda HR-V (1,665 litres) and far more than the Kona from Hyundai (1,297 litres) or the CX-3 from Mazda (1,260 litres) can muster.

No complaints about the comfort of the seats to go with that aforementioned great visibility. The steering wheel, in the two GT-Line versions at least, is flat-bottomed which I always appreciate, though again it’s a bit out of place given the decidedly non-sporty powertrain of the 2020 Soul.

Ergonomics are a touchy point with me, who hath little patience for anything in general and so gets quickly fed up when commands and buttons aren’t where I initially think they should be. On this front, The Soul quickly became my friend. The bigger touchscreen of the GT-Line Limited is easy to use and by default is a split-screen affair that manages not to be overly fussy. Most of the important stuff, like climate control, audio system, etc., is accessed via physical buttons and knobs, which is great for those drivers who want to, you know, keep their eyes on the road and all. 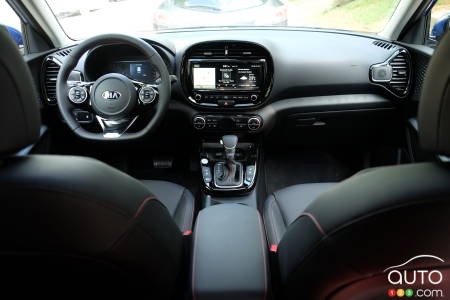 The drive
So you’re comfortably seated in those nice seats, you can see clearly and far thanks to the upright shape and ample fenestration, you feel like you’re in an upscale vehicle plus you’re digging the intuitiveness of all the commands; and you press the bush-button start (if you’re in an EX Premium or above). From there, your experience is more functional than fantastical, and as long as you remember that you’ll be fine.

The Soul’s acceleration is decent but you have to drive your spurs a bit into the flanks of the thing to get it properly going, and it can get grouchy about it. But still, at cruising speed it’s a smooth ride that awaits you, the suspension doing a good job of flattening out the road’s imperfections. Activating Sport mode did make for a harder ride and when I engaged it on return from Costco my booty in the trunk started to jump around a bit. But then who needs Sport mode anyways, in a vehicle like this?

Steering is on the light side but it’s honest, responding accurately to your wishes. The new-generation 2020 Soul also benefits from a slightly stiffer chassis, and that goes some way to explaining its deftness when cornering. It might be tall and boxy, but it hugs the road fairly nicely. 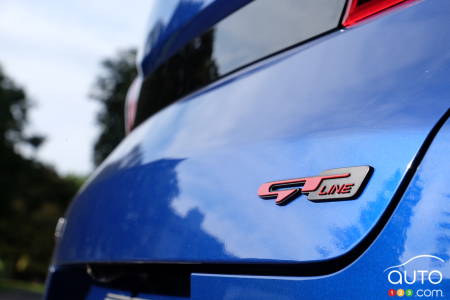 It’s a shame Kia once again deemed it unnecessary to include all-wheel drive as an option. My test run was a mid-summer affair so it wasn’t a factor really, but if I owned one of these I’d like to feel I could burn it up the hill I live at the top of in mid-February.

Official fuel consumption is 8.6L/100 km (city) and 7.1L/100 km (highway), but I came in at 9.1L/100 km for my week, driving an estimated 60/40 city/highway ratio – slightly disappointing, truth be told, but for one the car was brand-spanking new with 30 km on it when I took possession, and over the long haul I would think owners will get closer to official figures.

Conclusion
While other models from the “golden” age of boxes on wheels – think of the Nissan Cube, the Honda Element, the Scion xB, etc. – have departed or been transformed, the Soul lives on. Visibility is great, the interior is spacious and the ergonomics are sound. I would have liked to lay down better fuel-consumption numbers, but long-term owners will get a better idea of how economical the Soul is on that front. 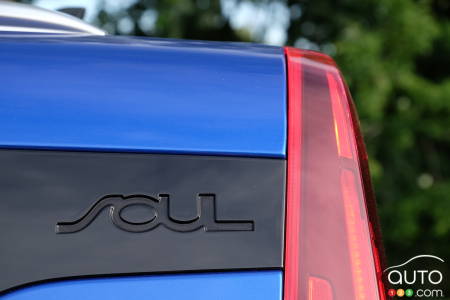 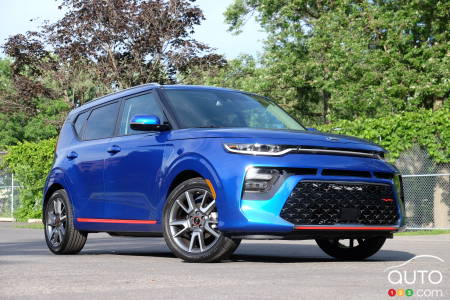 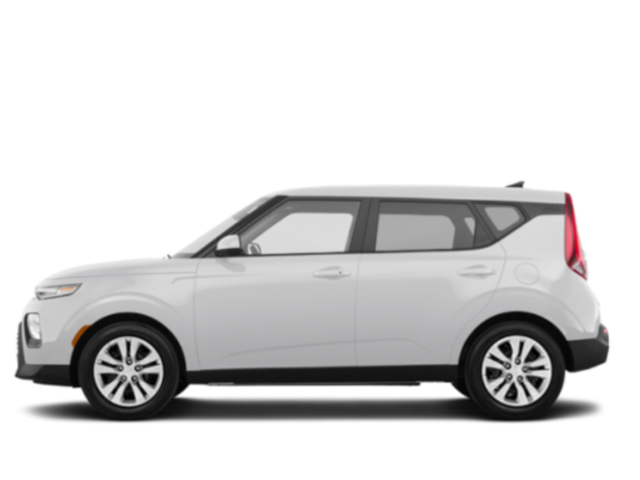 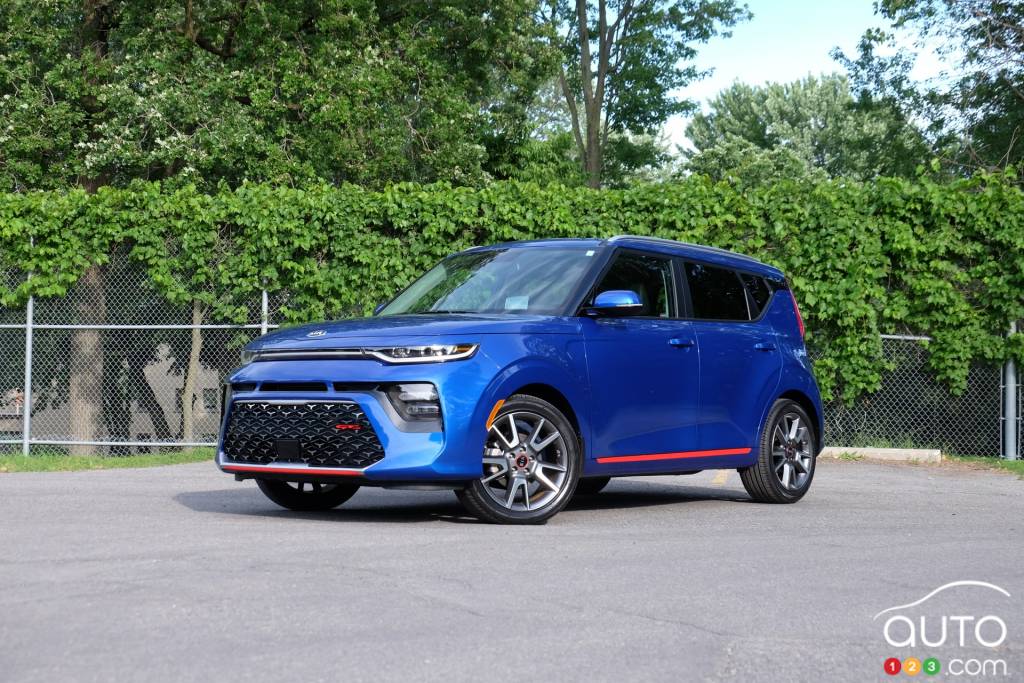 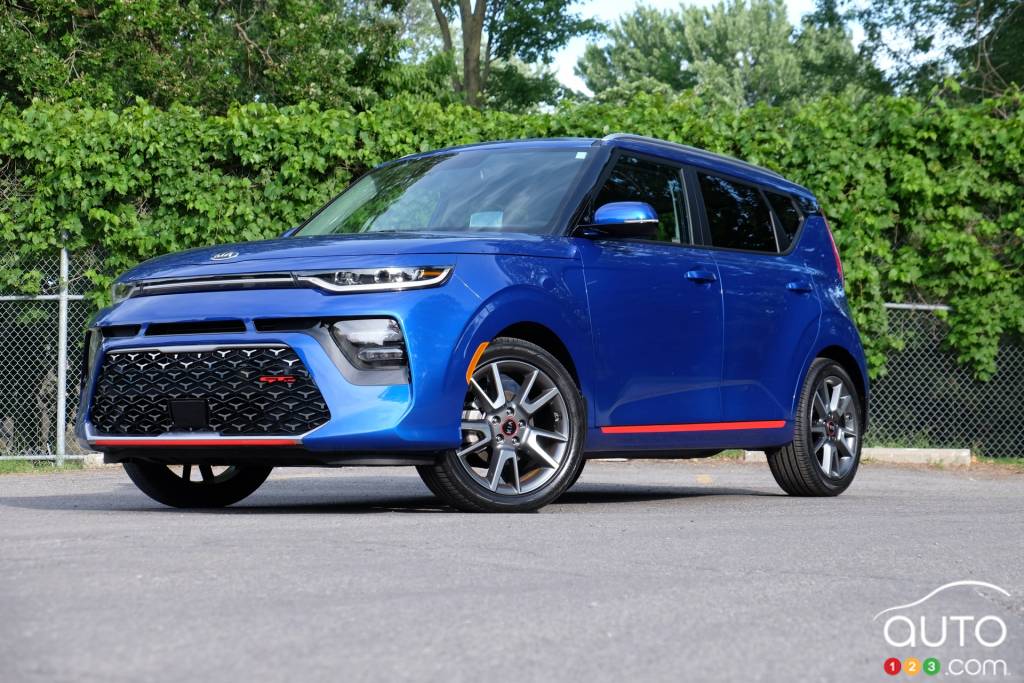 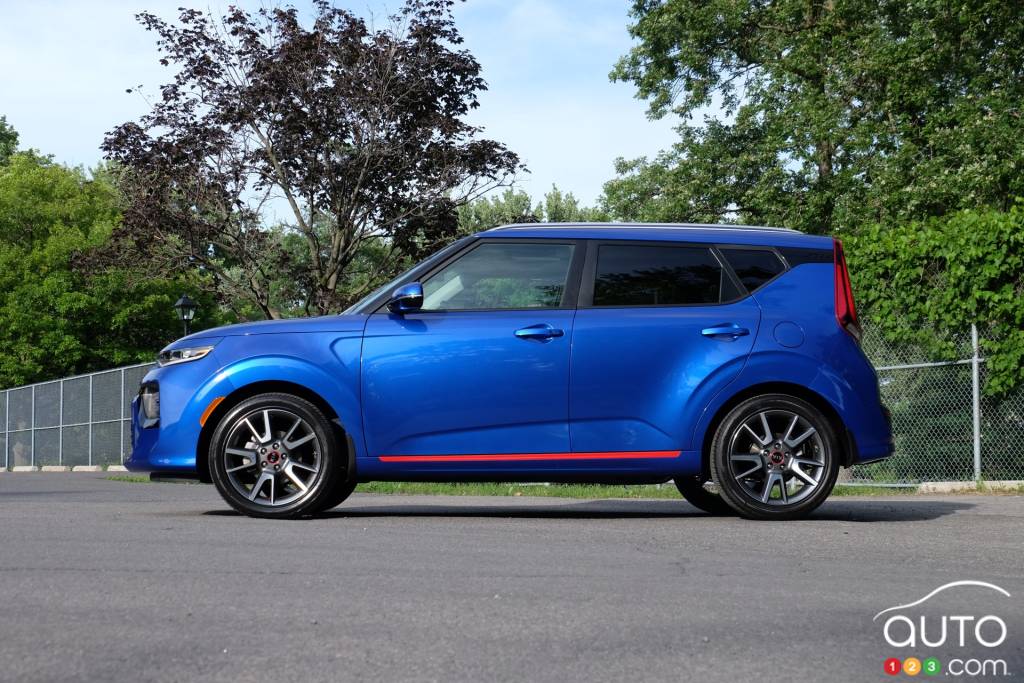 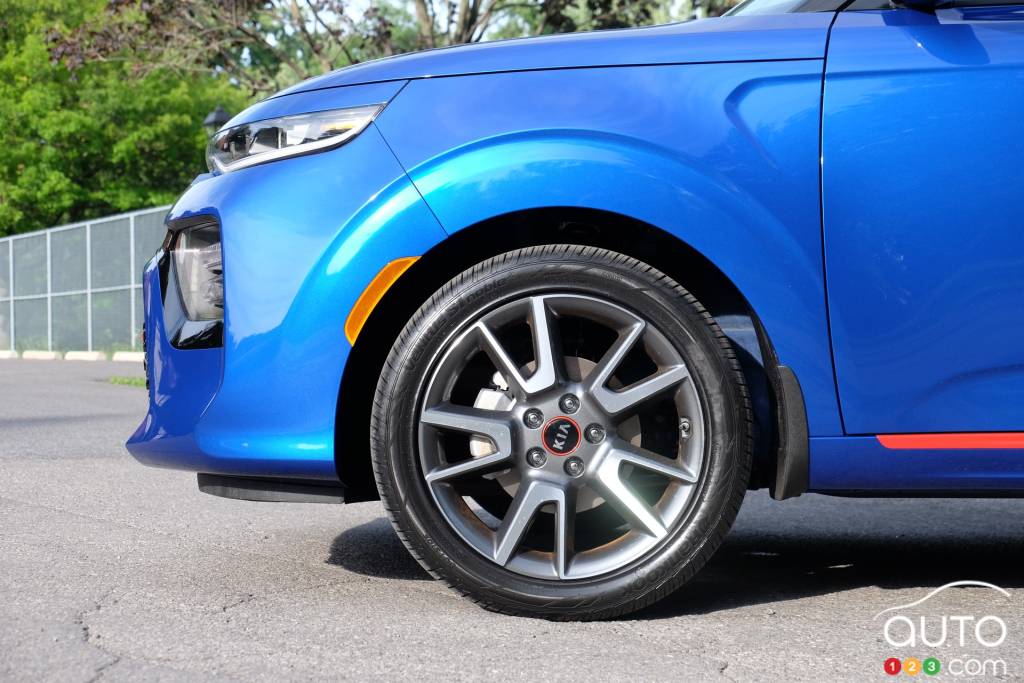 Auto123.com gets behind the wheel on Canadian soil of the new 2020 Kia Soul, a car that manages to hold on to its soul for the new edition, but only partiall...