Christmas is coming early for GM, with today’s announcement of a large investment in its autonomous driving division, Cruise Automation. Investment firm SoftBank Vision Fund, active and well-regarded in the technological domain, is committing $2.25 billion to the division.

The funds will enable GM to commercially produce self-driving vehicles as early as 2019.

In anticipation of this major announcement, GM shares jumped by some 10% to hit $41.70 this morning in pre-market trading.

At GM, the mood is understandably festive:

“This is a very historic day when we look at the future of personal mobility. We are pleased to partner with Softbank. We’re 100 percent committed to this mission and creating safe autonomous vehicles at large scale.”

The agreement between the companies allows Softbank to acquire a 19.6% share of GM Cruise, which also includes Strobe Inc., a company specializing in lidar laser-detection technology that was acquired by GM last October.

The combined value of the companies is evaluated at $11.5 billion. 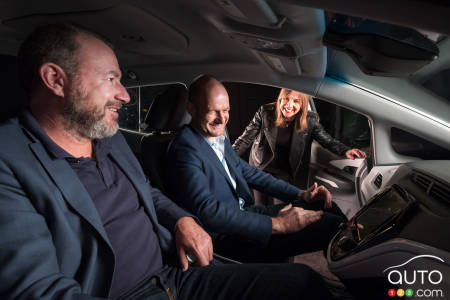 By the terms of the agreement, GM must put $1.1 billion into its GM Cruise division; this will include the $500 million it has already invested in the technology since the beginning of the year.

As for the money committed by Softbank, a first installment of $900 million is expected when the transaction is finalized, next June. When the Cruise division’s self-driving cars are ready to go to market, the remaining $1.35 million will be paid.

GM Cruise is currently testing autonomous vehicles in several cities, including San Francisco. These vehicles are being assembled at GM’s Orion plant in a suburb of Detroit.

Hyundai has announced it is pumping $35 billion into developing new automotive technologies and autonomous drive systems. The South Korean government is a pa...