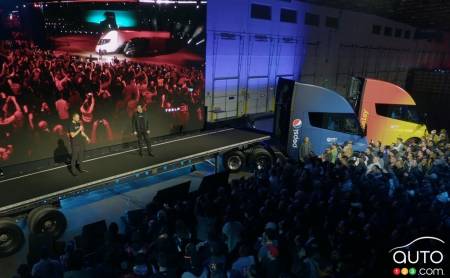 Photo: Tesla
During the announcement of the first deliveries of Tesla Semi trucks to PepsiCo

•    Tesla has delivered its first all-electric semi trucks to the giant Pepsi.

More than three years after promising to launch production of an electric heavy-duty truck, Tesla has delivered its first Semis to the PepsiCo company. The company put on an event to mark the occasion at its factory in Reno, Nevada. The whole thing was broadcast live, including on the Twitter platform, newly owned by Tesla boss Elon Musk.

Musk drove one of the three Tesla Semis in front of a crowd gathered inside the factory. One of the trucks was white, the two others decorated with the Pepsi logo and the Frito-Lay colours.

Pepsi is participating in a zero-emission transportation project at a Frito-Lay plant in Modesto, California. That’s funded by a $15.4 million California Air Resources Board Clean Freight Technology grant, makes use of 15 Tesla battery-electric tractors and other trucks powered by electricity and natural gas. 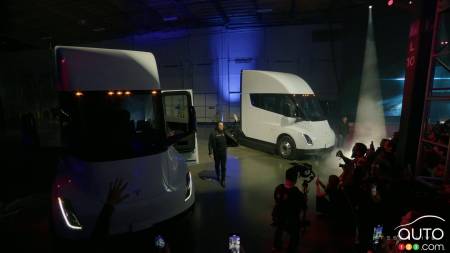 When the Tesla Semi was unveiled in November 2017, Musk said production would begin in 2019 and that the trucks would be able to autonomously follow each other in a convoy. Last October, he said the company's fully autonomous driving system was not quite ready.

"It's been a long journey, a long five years," Musk said, "but this is really going to revolutionize the roads."

The executive said the truck is equipped with a three-motor powertrain, based on that of the Plaid (the most powerful) version of the Model S sedan and Model X SUV.

Two of the drive units temporarily deactivate on the highway for maximum efficiency, and then kick in when torque and acceleration are needed, such as when climbing a hill. A video shown at the event shows the truck climbing a 6 percent incline, passing other vehicles in the process.

Even better, the Semi's regenerative capabilities capture energy on downhill runs, avoiding the threat of brake failure and truck runaway, said Musk, who added that that delivers “a significant safety improvement for the truck driver and other people on the road.”

About the engines, he said, “one of them is more powerful than the diesel engine on a semi truck.” For comparison, the drive unit in a Tesla Model S Plaid delivers 1,020 hp and 1,050 lb-ft of torque. A diesel-powered tractor-trailer typically has about 500 to 600 horsepower, but torque can range from 1,000 to 2,000 pound-feet. 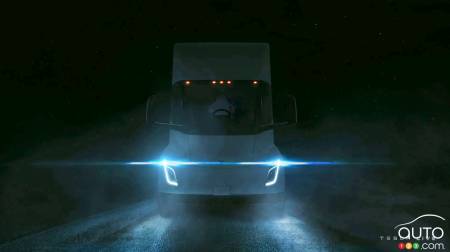 Elon Musk said the truck delivered this week has a range of 500 miles when pulling an 82,000-lb load. The normal load limit for a semi truck is about 80,000 lb. So technically, we have an even more capable vehicle with this electric solution.

Musk cited several tests conducted on the Tesla Semi. In particular, the truck was able to drive between the cities of Fremont and San Diego, California, a journey of just under 500 miles.

To power the Semi, Musk said Tesla has developed a “megawatt-class” V4 DC supercharger, cooled by a next-generation liquid that allows users to run a megawatt through a full-size charging cable. The charger will be ready next year, Tesla promises.

According to Musk, the commercial trucking industry accounts for 20 percent of transportation greenhouse gas emissions and 33 percent of particulate matter.

Tesla said that other vehicles would use the Semi's powertrain, and that the company would use the truck for its own transportation needs.

Here are the details about the 2023 Kia model lineup in Canada, including electric models like the EV6 and Niro EV, and the new Sportage PHEV version.

The 2024 Volvo EX30 will be presented in June, the manufacturer's CEO has confirmed, and production will begin soon after. It's not known at this time if thi...