With all the safety features included in and available for new vehicle models today, and with consumer awareness now at an all-time high, crash tests that are administered to automakers’ products are increasingly the subject of intense interest.

A bad result here or a failed test there, and consumers are apt to turn away in the direction of competing models.

For Tesla, a crucial first step has just been successfully taken. The NHTSA (National Highway Traffic Safety Administration), the U.S. equivalent of Transport Canada has given the California-based automaker’s Model 3 electric sedan the best possible five star rating in all categories, including  frontal crash, side crash and rollover testing. The government agency also gave its seal of approval to the Model 3 in a separate category of tests (side barrier, side pole, etc.).

In all cases, all human occupants would have been kept safe, the NHTSA concluded.

The result is not entirely surprising, because most of the models currently sold on the market pass these NHTSA tests. The Model 3’s own stable mates, the Model S and Model X, are among them.

Nonetheless, this first aced exam is positive news for the automaker. Now, it will be interesting to see how the Model 3 fares in the full battery of tests that await it at the IIHS (Insurance Institute for Highway Safety), considered to be far more stringent and difficult to pass. For the moment, the only IIHS results we have for the Model 3 are for headlights (it scored an Acceptable rating), and the front collision test (it earned the best possible Superior rating).

The small overlap impact test is the one that has proven most challenging for many vehicles.

It’s beyond doubt that the solidity of Tesla cars is beyond dispute – proof can be seen in the highly-publicized videos of Tesla-related road incidents that regularly make the rounds online.

Most recently, a collision between a Tesla Model X and a small plane proved a staunch test of the car’s sturdiness. The occupants of the vehicle said that, were it not for the solid structure of the Tesla, they would certainly have died. Music to a car company’s ears… 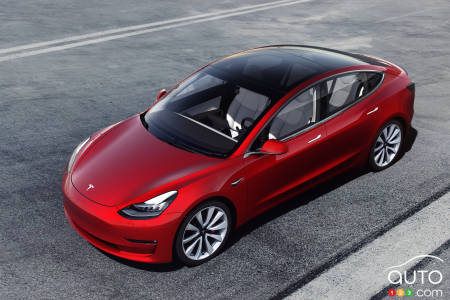