Toyota will build a new plant to manufacture batteries for hybrid and all-electric vehicles in the United States, at a cost of $1.29 billion USD.

The move is part of a wave of global announcements (more on that below) aimed at increasing production of batteries for electric vehicles. Most automakers have now laid out and gotten underway with major plans to transition from combustion engines to electric powertrains in the next decade or so.

The location of Toyota's plant has not been announced, but the company has stated that it means eventually hiring 1,750 employees, and that the plant will be operational starting in 2025, with full capacity attained by 2031. It’s not a stretch to guess that any such new construction will likely be located near one of the company's current U.S. facilities. Toyota has operations in Missouri, Kentucky, Indiana, Alabama and Texas.

The announced plant is part of Toyota's plan to invest $3.4 billion in the U.S. over the next decade, to develop electrification technologies and produce the components needed for its transition to electric mobility. The company did not specify where the remaining $2.1 billion would be spent, but some of it could be used to build another plant. 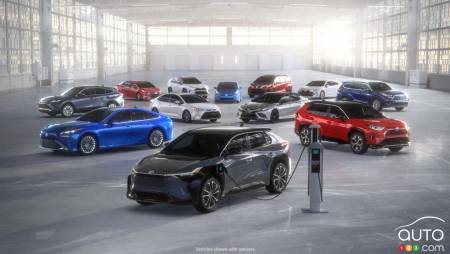 As mentioned, Toyota’s not alone in investing large sums in the switch to electric. Stellantis and LG Energy Solution said Monday that they plan to build a battery manufacturing plant, which will help the automaker reach its goal of 40 percent electrified model sales in the U.S. by 2030. They did not specify its location, however.

Volvo’s upcoming IPO will allow it to fund its plans to transform into an all-electric vehicle company by 2030. Ford also announced that it will transform a transmission plant in northwest England to make electric components for cars and trucks sold in Europe.

GM plans to build battery plants in Ohio and Tennessee, while Ford has plans in Tennessee and Kentucky.

" Today's commitment to electrification is about achieving long-term sustainability for the environment, American jobs and consumers," said Ted Ogawa, Toyota's North American CEO, via a statement.