In all, some 360,000 fewer Toyotas will be built worldwide next month due to the chip shortage Automotive columnist: Daniel Rufiange , Updated: 2021-08-23

Toyota has been relatively unaffected by the global microchip shortage up to now, but now it appears that the lack of chips has caught up to it as well.  The Japanese automaker has announced that it will cut 40% of its global production this month.

Various factories belonging to the world’s largest auto manufacturer will be affected, including in Mexico, the United States… and Canada.

The company said production could be reduced by as much as 360,000 vehicles worldwide by the end of September. Toyota's North American division told Automotive News that it alone could lose between 60,000 and 90,000 vehicles. The parent company estimates that 80,000 units will be lost on our continent.

This is a considerable figure, but it is important to specify that not all models will be affected. Pickup trucks, in particular, will see their regular production maintained, meaning the revamped new 2022 Tundra will not be affected.

Shutdowns will also vary from location to location. Toyota published a partial schedule of its production shutdowns, which shows that some plants will be idling for only a few days next month, while others, such as the factory producing the Century sedan (Japanese market), will be closed for the entire month. 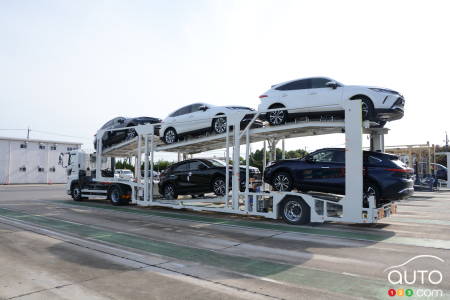 The global microchip shortage continues to wreak havoc on the automotive industry. This is leading to some very unusual situations. In Brazil, for example, Volkswagen is selling its Fox without a multimedia screen. Ford has taken to delivering incomplete vehicles to its dealers with the promise of completing them later with the shipment of missing parts.

As for the chip situation, it's not clear when supplies could return to normal, but recall that experts earlier this summer pointed to the beginning of 2022.

For now, only one thing matters: patience.

Toyota has to reduce once again its monthly production targets worldwide. Roughly speaking, instead of assembling 800,000 vehicles, it will produce 750,000.

Toyota reduced its production once again in July

Afflicted from every angle, Toyota had to reduce its monthly production last July. Despite this, the company is maintaining its annual plans... provided that...