Too simple a choice

The entry level luxury car segment is now into its teens. I say this because just over 20 years ago, other than the Audi 4000, BMW 320i and, of course, the Cadillac Cimarron, this category of cars had very few players. Between the late 80's and very early 90s, the Japanese car makers noticed a hole that needed to be filled. Enter the Acuras, Infinitis and Lexus' offerings along side the Germans and a real category was born.

Acura, which officially began doing business in 1987, was the first Asian builder to offer reasonably priced luxury cars such as the Legend and the Integra. Throughout the 90s, nameplates such as NSX, Vigor, TL, RL, EL, MDX and in 2003, the TSX landed on our shores. The TSX finds itself bridging the gap between the base EL and upper mid-range TL.

The TSX comes in only one trim level with two options: a 5-speed automatic transmission and Navigation. We tested a manual gearbox equipped version with Navigation. It retails for $38,200. The range varies between $34,900 and $39,400.

What we know as the Acura TSX in North America, parts of Europe and Japan know as the Honda Accord, Honda's best selling model worldwide. This being the case, it only makes sense that the styling of the TSX be so conservative. Other markets get a wagon version of the car and it certainly is not dull looking. That is not to say that the Acura is boring, its lines are classy, simple and display an aura of uncomplicated elegance that nearly insure that it will age very well. The Graphite Pearl paint was perfectly applied and the panels, aligned with perfection. Xenon headlights are standard however fog lights are a $691.10 option.

The passenger quarters are easily one of the best elements of the TSX. The layout and presentation of the cabin befits a car costing $20,000 more. Step into the compact TSX, then into the pricier TL and other than the number of buttons, the quality, look and luxury levels are the same. About those buttons, after a few moments of familiarization, they quickly become easy to use especially after memorising where the A/C switch is. The Honda/Acura navigation system continues to be most user-friendly thanks in part to its touch screen capacity. 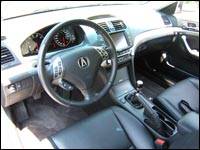 The seats are as comfortable as any lazy chair only they are much more supportive for both the lower and upper portions of the back. Rear occupants are also treated to a cozy 60/40 folding bench. Interior room is generous even for a car as compact as the TSX. Soft leather abounds as does quality plastics and tasteful alloy trim. Of the very few qualms I have with this car is the fact that the use of the HVAC controls are delayed by the time it takes for the navigation system to boot up. On a hot summer day and with a black leather interior, it would be nice to blast the A/C right away.

The Acura 1.7EL and EL basically amounted to a luxury-enhanced version of the Honda Civic - but it was a popular and well-received model that delivered premi...

The Acura RL is but one of several new premium sedans offered this year by Japanese manufacturers. Lexus just launched a completely new 'GS' line while Infin...

All luxury cars are status symbols. People like to buy them because of the prestige they can bring to them. These cars become a sign to the outside world s...