From the introduction of the premium compact A3 range; to the confirmation of the R9 supercar, it's been a busy twelve months for our friends from Audi.

In between, we've received a fully updated A4 line-up, highlighted by the new direct-injection FSI (fuel stratified injection) 2.0-litre turbocharged four and an FSI 3.2-litre vee-six replacing the current 1.8T and 3.0 mills respectively. Add to that the new A6 3.2 Avant and the coming soon Q7, plus the confirmation of the future RS 4, S6 and S8, followed by the next TT and...whew! Lets just say, the guy stocking the brochures at the Audi dealer must be putting in for O.T.

Sandwiched between all of this activity, it may have been all too easy to overlook one of the all-time favourites from the quattro clan: the new for 2006 S4 Sedan.

The S4 was introduced later in the previous A4's lifecycle. So, it's not all that new. In fact many of the 2006 A4's updates, like new rear trapezoidal links and wheel carriers and front tie rods were borrowed from its raunchier sibling. So for now, let's just say the rest of its showroom mates are just getting caught up to the higher-performing S4, OK?

The more obvious external changes, the new corporate Audi grille and rear styling, the S4 shares with the cooking A4s. These styling changes add a bit of length to the S4, but the quad exhaust pipes at the rear in place of the previous generation's duals let everyone know the S4 is the hotrod of the family.

Arguably, the tastiest part of the car, the honking 340 horsepower, 302 pound-foot of torque 4.2-litre vee-eight, has been retained, and is still squeezed into an engine bay that also accepts a four pot.

Fortunately, the 2006 S4 retains the high level of comfort, luxury and entertainment expected in any Audi; the industry benchmark in fit and finish. In the S4, soft-touch surfaces, flawless joints, and textured metal accents can be found throughout. Subtle, driver-oriented details like the Recaro bucket seats, decidedly thick leather-wrapped wheel, ideally positioned dead pedal and brake and throttle pedals close enough to facilitate heel-and-toe dancing only hint at the beast lying within the conservative four-door sedan body work.

Like all '06 manual transmission-equipped S4s, the Cambridge Green tester came with Audi's new 40:60 split quattro system. One of the first things that will pop out of your mouth when driving the '06 S4 will be, "So when was I ever able to hang the tail out in an Audi?"

Whereas previous S4s tended to initially understeer, this new setup allows you to get on the gas and use the throttle more readily to bring the rear of the car around. Even in corners entered too hot, plant your right foot and the new rear-end torque bias balances the car nicely. During the week with the S4, a couple of rainy days only enhanced the newfound flexibility in the car's handling attitude. Gravel roads will bring the same smile to your mouth.

Like all new A4s, the S4 also gets Audi's Servotronic steering mechanism. It varies the level of assistance depending on vehicle speed and delivers way more feel than the last version. It helps make the S4 one of the best for battling beaten-up back roads. Off-camber turns, rumpled pavement braking zones--nothing fazes the new S4. Not bad for such a heavy car. The only downside to the chassis's alertness and composure is a brittle ride and an overall sense of detachment from what's really going on at ground level.

The Audi S4 sedan will benefit for 2018 from the same improved engine the automaker installed in the S5 coupe, as well as an 8-speed Tiptronic transmission a... 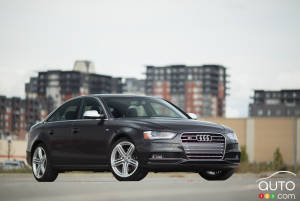 Audi’s S4 is one of the best-rounded cars I’ve driven lately. This sentiment was expressed by a few other people (all in the know where cars are concerned) t... 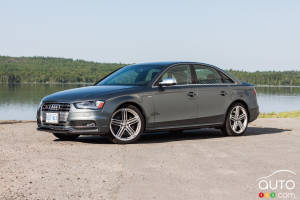 When I bought my laptop in 2010, it was the pinnacle of technology and the fastest thing I could afford at the time.