Like anything in life, we thrive on inspiration to move forward, to create, to change, to evolve, and to grow. Inspiration helps us overcome the bad, it keeps us looking for the good, and it helps us live fuller lives. Inspiration can come in many different forms from a gorgeous landscape to a soft-spoken word right down to a touch, sound or even a smell. Letting yourself be inspired everyday by the world around you is the way to live, really live, and the head designers at Honda Motor Corp. have done just that: let the world inspire them, completely.

There’s no denying the Honda Civic is a hugely important car for the Japanese automaker. Just like the Corolla and Beetle, the Civic has made a serious name for itself the world over, and everyone’s got a Civic story. Whether it was your very first car (or your friend’s first car he let you learn to drive manual on), we’ve all had experiences with Honda Civics over the years, and I’d wager most of those were positive moments.

Those positive moments, life moments, and memories are what inspired lead exterior designer Guy Melville-Pearce when he took to creating the look for the all-new Honda Civic Coupe.

“We knew the Civic Coupe had to be at least three things: athletic, charismatic, and daring,” he explained.

With the help of over 50 other designers across five design studios globally, he shaped the new exterior of the 2016 Honda Civic Coupe, and I have to admit, in Energy Green (as seen in the gallery), I don’t think there is a more daring or charismatic coupe right now in the segment.

Athleticism
The nature of a coupe’s stance is one that’s almost instantly athletic. The raised haunches and squat backend give the illusion of a crouched-and-ready-to-pounce animal. That look is most definitely present on the 2016 Honda Civic Coupe, with an inch of length removed from the nose, 5.5” chopped from the rear (for a tighter overhang), plus a roofline that sits nearly an inch lower than the outgoing model’s, as well.

It doesn’t seem like much, but those subtractions add up and make all the difference in helping the new Civic Coupe look tighter, tougher, and more toned. The rear passenger windows were recessed further to beef out the rear wheel fenders even more, adding to that muscular stance. It’s kind of like the Civic Coupe did some serious CrossFit for the makeover, and the results are fantastic.

It’s a good thing because there’s now more room in the Civic Coupe in comparison to the outgoing model, so you can fit all your friends and up to three golf bags in the trunk. Of a coupe. Yup.

Getting in and out of the 2016 Honda Civic Coupe’s rear seats is as graceful as can be when dealing with a coupe. However, for my small stature, the rear seats were more than adequate, and I feel like my 4-year-old son would have plenty of leg space and be uber comfy back there.

Charisma
Using the word “charismatic” to describe a car might seem a bit odd, but it works with the new Civic Coupe. It really does have all the charisma and charm the Honda reps say it does.

Sporting the new Honda family chrome wing in the front, along with all-new LED headlights and DRL as well as LED taillights, the new Civic Coupe is instantly recognizable, day or night. This not only separates it clearly from the previous generation, which (let’s be honest) was pretty good at blending in, but also sets it apart in a segment that’s rife with some seriously good competition.

But there’s more to the Honda Civic’s charisma than just fancy light technology and a chrome wing: There’s the fact that it’s an all-new Civic Coupe. That’s insanely alluring and the #civicnation is alive and well, and the many, many followers of this cult-like car club have been waiting with great anticipation to see, feel, and hear what Honda had in store for the new coupe.

Daring
Truly, the exterior design of the 2016 Honda Civic Coupe was the main focus of this drive event. Sporting the same 1.5L turbocharged mill (a brand new engine for the Honda Civic lineup), coupled to a CVT, all our Civic Coupe Touring models were top of the line with all the bells and whistles. But it wasn’t all those bells and whistles or even the whistle-blower under the hood that was the most interesting part; it really was the overall look of the car which garnered so much attention.

With vibrant new colours such as Energy Green, the 2016 Civic Coupe does dare to be bold, and it dares to be bold in the right ways.

I’m also going to throw in the look and design of the rear into the “daring” characteristic of the new Honda Civic Coupe because, well, just look at it. Similar to the sedan, I feel it possesses a bit too much Crosstour resemblances. However, its geometric qualities and taillights that create a subtle decklid spoiler definitely give the Civic Coupe some serious character, and I can appreciate that.

Bold looks, bold drive
Now, Honda has retained the same 1.5L mill under the hood of the new Civic Coupe, keeping horsepower at 174 and torque at 162 lb-ft. These are all very good things, and something the Honda fanboys will continue to eat up, no doubt. What they haven’t done yet is offer the 1.5L turbo with a manual transmission. At the moment you can only get it with the CVT. However, it was announced that for the 2017 model year, Honda will offer a 6-speed manual paired with the turbo mill across all Civic body styles. Rejoice!

Honda also tweaked the suspension, damping, and stabilizer bars in the new Civic Coupe. This all ties into the car being more athletic and dynamic on the road. And while it feels quite a bit more athletic than the Civic Sedan, it’s not as sporty as the new Civic Si is sure to be. It’s still a tad soft around the edges, with noticeable body roll in sharper corners.

Equipped with Canadian-exclusive steering wheel-mounted paddle shifters, traversing Route 99 (aka the Sea-to-Sky Highway) from Vancouver to Whistler was nothing short of sheer driving pleasure.

I quite like the 2016 Honda Civic Sedan, but I like the new Civic Coupe more. It feels more nimble, better sorted, and the ability to “shift” the CVT is appreciated as “gear” changes are instantaneous and smooth.

One foible: I did not enjoy the revs being held as long as they were upon downshifting. Just because I downshift doesn’t necessarily mean I want to accelerate; there are times I want to engine brake. Here, the CVT couldn’t tell the difference and so would hold the revs up high unnecessarily.

Appealing to the right demographic
Honda knows its market for the Civic pretty well. That’s why the 2016 Civic Coupe also features another Canadian-exclusive item: a standard wireless charging pad for non-iPhone smartphones.

This is always a sore point for me (I’m an iPhone owner), but what’s not is the integration of Apple CarPlay and Android Auto. Furthermore, while the HMI system is clean and concise, the usability of the screen and all the touch-sensitive buttons is not. JUST GIVE ME A KNOB! Of course, I’m not a millennial and am perhaps too old-fashioned…

Knob-less centre stacks aside, the 2016 Honda Civic Coupe is a fun little car that’s sure to appeal to precisely the buying public Honda intends it to. It’s funky and cool in all the right ways, and practical and down to earth in all the others. It manages to balance the two while maintaining an air of fashion, style, and hipness.

And if you needed one more reason to line up for your all-new Honda Civic Coupe: Honda’s assembly plant in Alliston, ON will be the sole producer for the coupe model, so it’s homegrown. Time to save all your pennies. 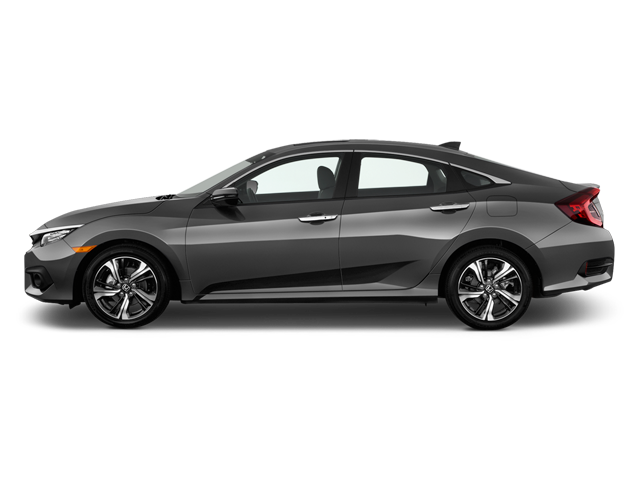 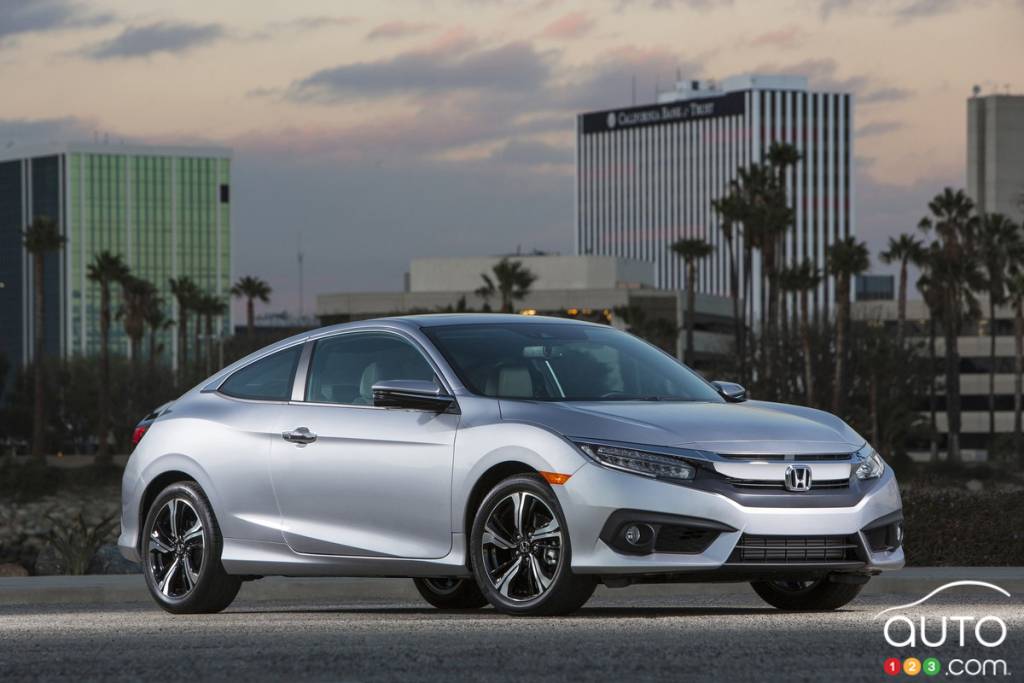 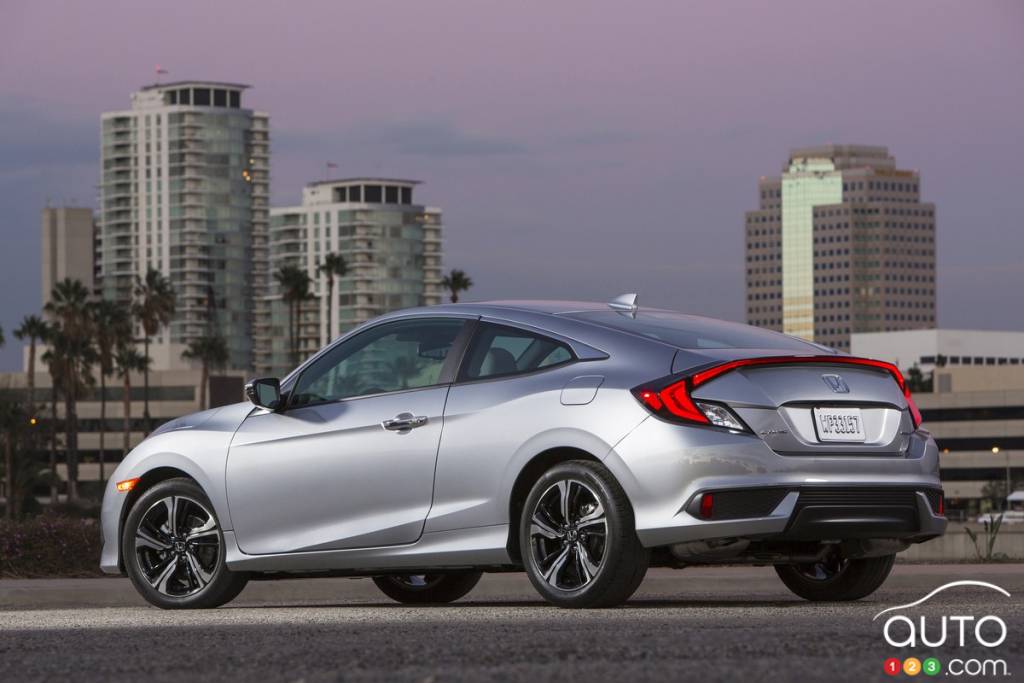 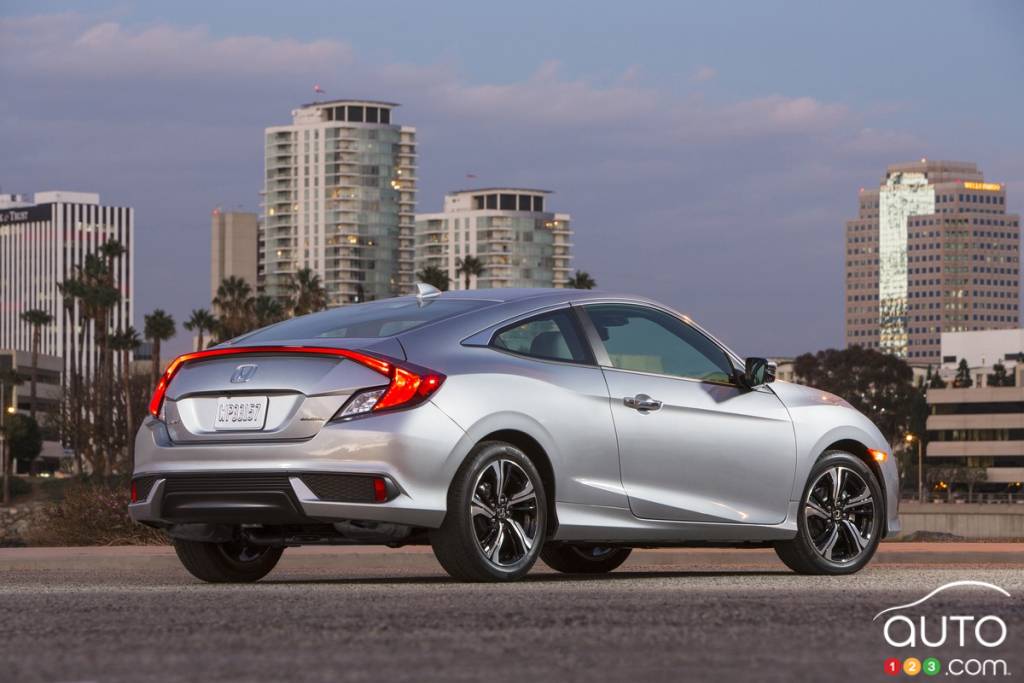 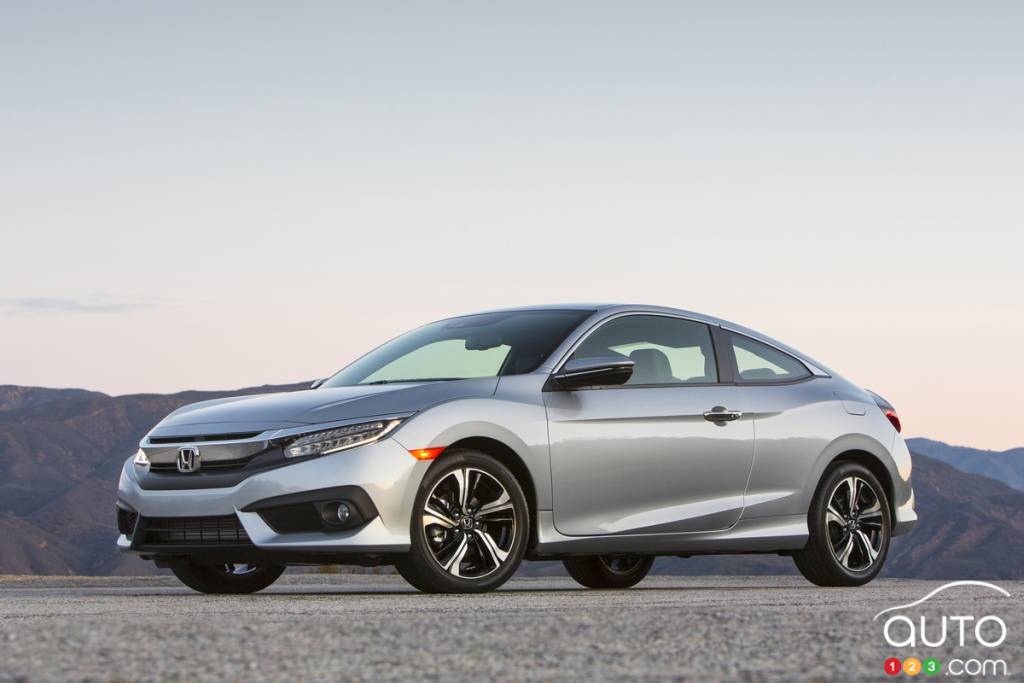 The fully redesigned 2016 Honda Civic Coupe was unveiled yesterday at the Los Angeles Auto Show. It sure looks more aggressive than the outgoing model. And t...

The new 2016 Honda Civic Coupe will make its global debut next week at the Los Angeles Auto Show. Meanwhile, the Honda Clarity Fuel Cell will appear for the ...

Honda is giving its uber-popular Civic sedan and coupe a design and tech update for 2019. Details and Canadian pricing have just been released for the countr...