There’s simply no better way of getting to know a new vehicle intimately than to take it on a road trip. And this was the strategy I wanted to use with the all-new 2017 Buick Envision crossover, General Motors’ vaunted compact vehicle that is assembled at its plant in Shanghai, China.

Just what is the Envision?
The Envision has just recently made its debut on the Canadian market. It’s larger than the very popular Encore (also new for 2017), but smaller than the now-legendary Enclave (heavily revised for 2018). In truth, the Envision could be compared with the new Chevrolet Equinox and GMC Terrain, except that it’s markedly more luxurious. In any event, it fills a void in a market segment in which Buick did not, up to now, have the weapons to take on the popular Acura RDX, Lincoln MKC and others.

The Buick Envision is available in several versions, starting with the base model, equipped with a 2.5L, 4-cylinder engine (197 hp) and front-wheel drive. The road trip version placed at my disposal by General Motors Canada was the Envision Premium II model; it features a 2.0L, 4-cylinder turbocharged engine delivering 252 hp and 260 lb-ft of torque using a 6-speed automatic transmission, and is equipped with all-wheel drive. This last feature is really a valuable asset during the winter season for folks who live in snowy climes.

And we’re off!
The Envision Premium II was the ideal choice for a 6-hour excursion that would take us from Montreal to New York City. A look at a map shows that the route between the two cities runs in a nearly straight line. Departing from Montreal requires using one of the island city’s major bridges to reach the South Shore (in our case, the infamous Champlain Bridge), then south on Highway 15 towards the U.S. border - a short hop of less than an hour. With an early-morning departure and bit of luck, we’d be across the border quickly and on to Interstate 87, known as one of the most beautiful interstate highways in the United States.

The Buick Envision offers a remarkably quiet ride, something that is made even more apparent on this route which offers a near-flawless road surface, which felt as smooth as the cloth on a billiard table. The posted speed limit is 65 mph (105 km/h), and I decided to set the cruise control at 112 km/h. This gave my companion and I the opportunity to take in the magnificent scenery offered by the Adirondack Mountains, a region of evergreen forests with enough snow over left for its melt to create tiny waterfalls and cascades. It was a joy to admire it all from the Envision, which provides occupants with good visibility in all directions. And for all its smoothness, this route offered climbs, descents and long, sweeping curves that made it anything but boring. We shared the road with the occasional transport truck, but these cohabitated peacefully with passenger cars like ours.

If you’re wondering how the turbocharged Buick Envision acquits itself performance-wise, it’s clear the car has no dreams of sporty glory. Still, it delivers acceptable acceleration (0 to 100 km/h in around 8 seconds), and it was more convincing still in its ability to pass those trucks we encountered.

A relaxing interior
When spending several hours in a vehicle it’s obviously a plus to have a pleasant environment. In this respect the Buick Envision Premium II is hard to beat in its market segment. The colour and the finish of the materials are as pleasant to the eye as to the touch. For drivers, the instrumentation is smartly laid out in their line of vision, and the dials are clear and easy to read. I particularly appreciated the speed indicator displayed in a reflection on the inside of the windshield. Frankly this technology should be universally included in all new cars, as it allows drivers to monitor their speed without taking their eyes off the road.

The layout of the dashboard is not the most elaborate ever devised, but its lines are elegant and evoke those of the beautifully designed 60s-era cars. The large screen display placed in the centre of the dashboard is really useful to access the navigation system as well as the back-up camera (although, the Envision still does not have inputs for the Apple CarPlay and Android Auto systems). As for the console, it’s not too intrusive and provides sufficient space for the cup-holders and the central storage bin. The gear-shift knob is equipped with a + and – push-button on the side of the knob for manual mode. There are no paddle shifters on the steering wheel – which is probably a good thing, since the wheel is already chockful of buttons.

The heated and ventilated front seats offer impressive comfort on longer trips. If you’re traveling with rear passengers, they also have access to individually controlled heated cushions, plus they benefit from greater legroom than in any competing model. The Buick Envision used on this long-range road test did not have a sunroof, which would provide rear occupants with even more headroom. That rear bench, by the way, can accommodate three passengers if need be.

Behind those passengers, the trunk is sufficiently large to house the luggage of at least two people making the trek to NYC (I was able to pile in all of my bags as well as those of my companion, plus a fairly large picnic basket). Loading capacity can be increased further by folding down flat the rear seats. The power hatchback can be opened by several means, including swiping your foot under the rear bumper (as long as you have the transmitter-equipped key fob in your pocket).

Made for the (long) road
Another great aspect of Interstate 87 is the presence of many rest areas (often with services like gas stations, food outlets, etc.) that provide nice settings to picnic right on the hatchback or at on-site tables. We discovered over the course of our trip that the Envision is an exceedingly quiet vehicle, aided in large part by the high-end Hankook Ventus tires. The steering is impressively precise without demanding too much effort from the driver. Braking caused no surprises, but felt perhaps a little less powerful compared certain of its competitors’. Buick seems to have firmed up the suspension in comparison with the automaker’s models of yore, but it does succeed, in conjunction with the Hankook tires, in delivering road handling that is both solid and reassuring.

Once in Albany, the state capital of New York State, it was time to leave Interstate 87 behind and take the New York Thruway (87-90) toll highway, which took us to the Big Apple. This road is a little older but just as comfortable, and took us through the Catskills Mountains, a region of budding trees and greenery. I chose to hop off this route just before arriving in New York, at Exit 135, which allowed me to take the Palisades Parkway (a 1940s-era road off-limits to heavy vehicles) and led me to the George Washington toll bridge. It took us across the Hudson River and onto the Henry Hudson Parkway, and eventually into downtown.

For many non-New Yorkers, driving in that great American metropolis is a terrifying prospect. And yet, with the exception of the old part of the city at the southern tip of Manhattan, nothing could be easier: the street grid (except for Broadway, which begins at Central Park) is laid out in quadrilateral fashion, and the city is ringed with (just a few) parkways. All you really need to do is take your time, and read the traffic signs. What’s more, pedestrians in New York are generally a disciplined breed. One thing to keep in mind, though, is parking: if you want to park your Buick or any other vehicle in Manhattan, expect to pay upwards of $60 per day! Our Envision was right at home in this urban environment, making good use of the Stop-Start system to spare the engine at red lights.

For the return trip from New York to Montreal, we simply retraced our route. By the time we returned to our point of departure, the onboard computer of the Buick Envision showed an average fuel consumption of 9.2L/100 km. It’s worth noting, though, that Buick recommends using superior fuel for the turbo engine. This was selling for $1.59 USD per gallon in New York State… or roughly the equivalent of $0.90/litre back home, exchange rate factored in!

On its launch in 2016, GM and its Chinese-built Envision came in for some pretty severe criticism (notably from unions in the American automotive sector who saw the vehicle foreign-made invader!). In any event, while I don’t think the vehicle meets the needs of those looking for sporty performance, for long, comfortable road trips, it probably can’t be beat. If that’s more your thing, you won’t be disappointed! 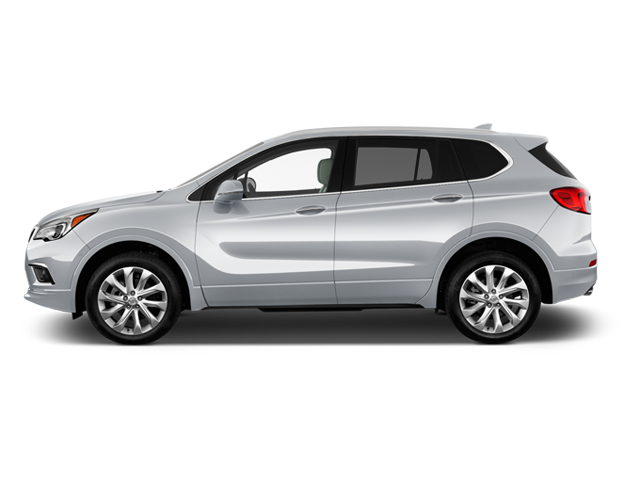 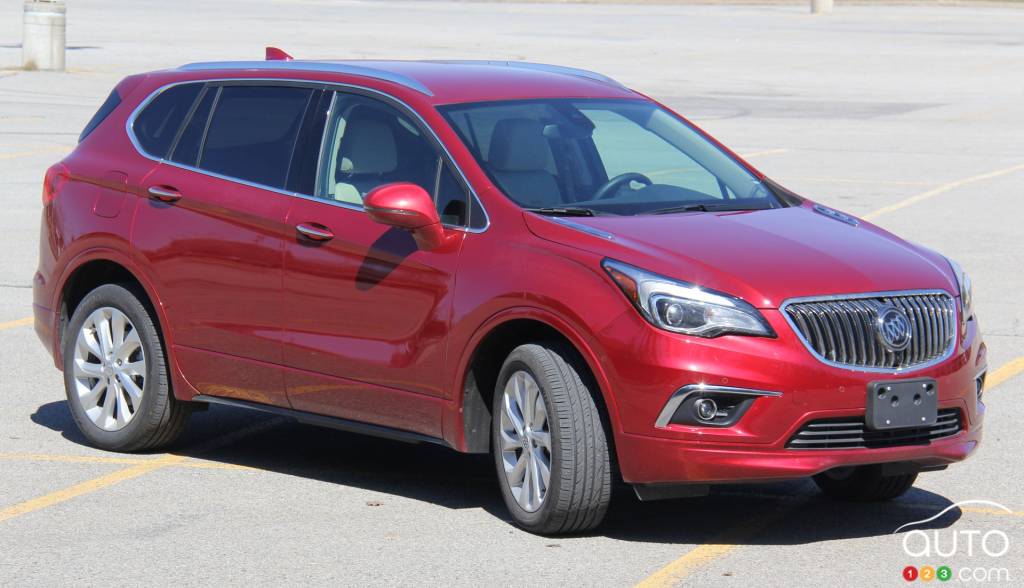 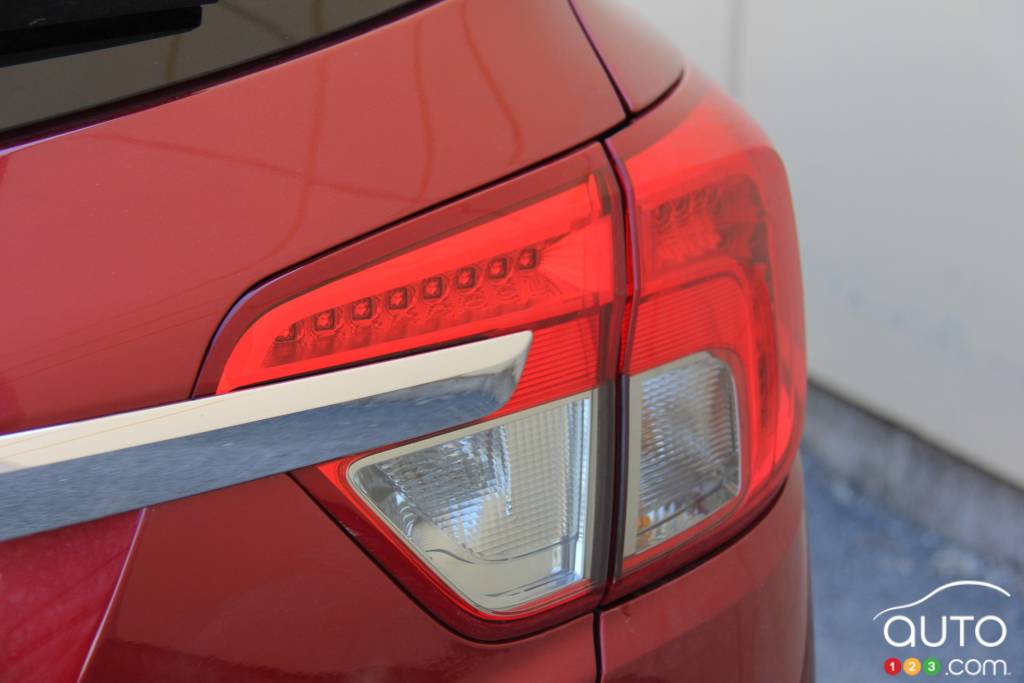 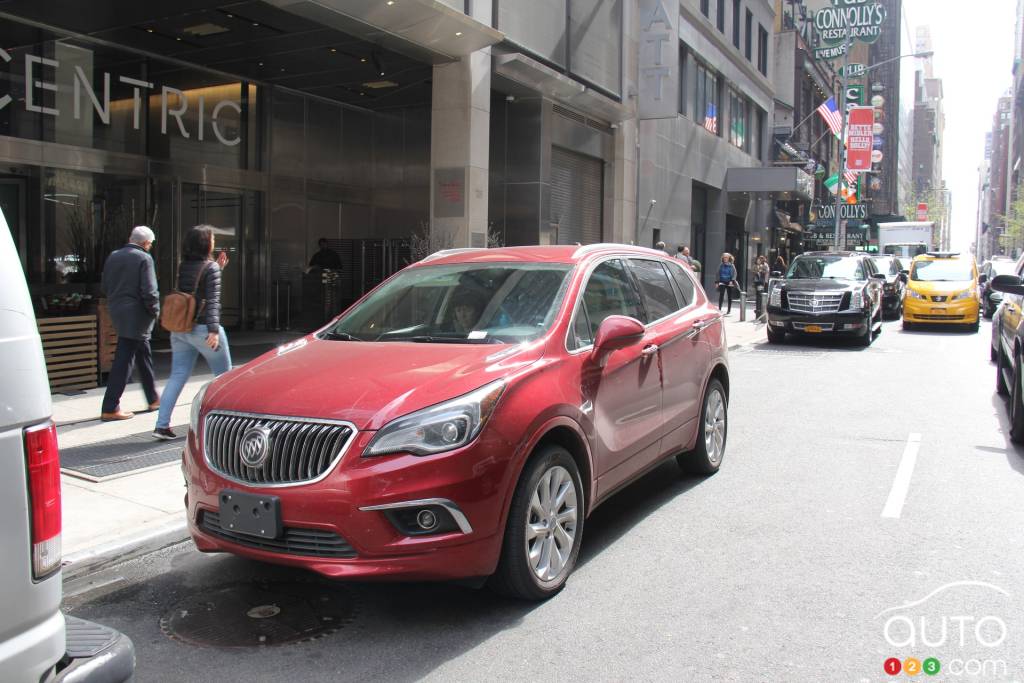 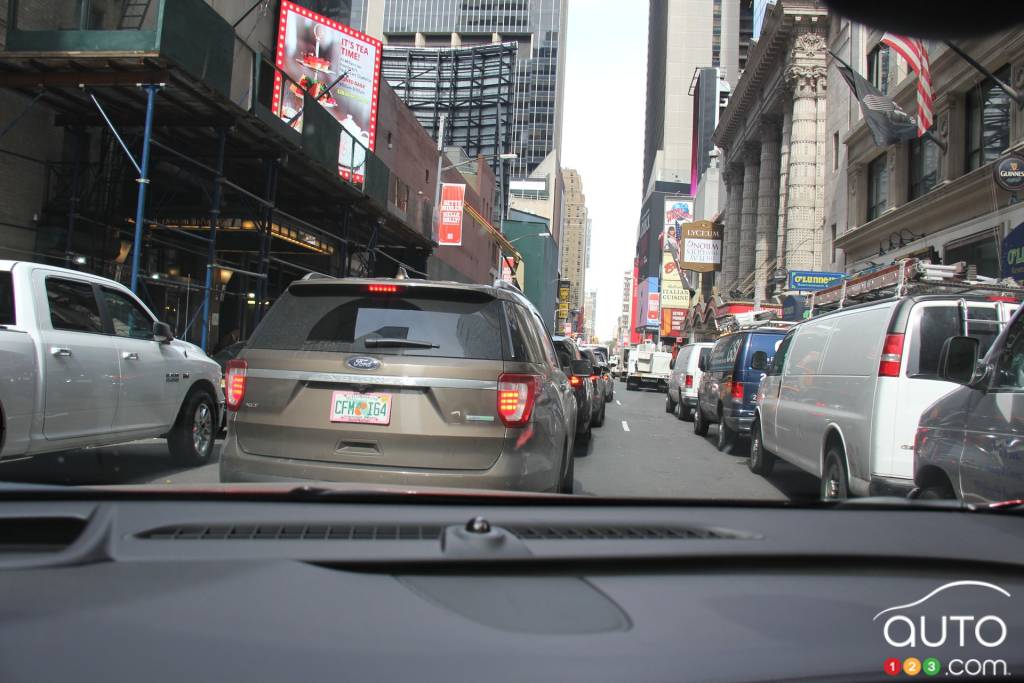 Buick has imported the Envision with its eye on slicing away sales from similarly sized premium rivals. Will it succeed? Find out!