Right in the middle of the dashboard, there’s a telltale sign that the recently updated 2017 Chevy Sonic Premier is targeting a young, modern, and connected shopper. It’s the central command system: a colour touchscreen underlined with tactile buttons and a chrome-ringed volume knob.

This isn’t revolutionary stuff, but the way the system works does stand out. Fire up the car, and in just a few seconds, the system is fully booted, responsive to your touch, Bluetooth-connected to your phone, and ready to call up the full functionality of Apple CarPlay or Android Auto, which displays numerous elements of the user’s smartphone onto the screen.

Open and slam the door, or work the door handle vigorously, and you’ll see that it doesn’t sound hollow, flimsy or metallic and empty. The doors (and hood and tailgate, too) feel like they’re from a pricier vehicle, not a $30 microwave oven.

The tester’s leather seats look rich, dense, and authentic. They’re nicely stitched, and the leather segments are puffy and thick, like something you’d find in an Acura or Volvo not so long ago. They’re also comfortable, the driver’s seat is power-adjusted, and both are embroidered with a bright red “RS” logo, not to mention heated and trimmed with suede accents. That’s a heck of a list of attributes for a set of seats in a cheap little car.

Furthermore, you’ll find many parts, switches, and controls from more expensive GM models, including the ENGINE START button, the wiper and light control stalks, the steering wheel and controls mounted on it, and the window switches. Various textures of plastic, dispatched with varying degrees of lustre and depth, work towards a touch of added richness. Don’t miss the sporty red stitching, either.

Sure, some of the cabin is dated. The climate controls are from 2008, while the execution of some recently added devices, such as the optionally available Lane Departure Warning system, makes them seem like afterthoughts, with buttons and display icons placed where they’d fit more than where they’d be logical. Another example? There’s a door lock switch near the radio and another on the driver’s door, but not on the passenger’s door.

That being said, the 2017 Chevy Sonic Premier most strongly defies its price tag when driving on real-world roads. Take it down a rough road at a good clip, and it won’t feel or sound flimsy or delicate as bumps and potholes pass underfoot. The opposite used to be true with cars like this one, but the Sonic feels solid, dense, and robust. Even on the roughest stretches of pavement I could find, the sound of the tires—not the pummeling of suspension components—took centre stage.

The ride is on the slightly sporty side: not uncomfortable, not stiff enough to crash into bumps, and far from soft and bouncy. Dampers show an appropriate softness around a progressively stiffer core—and if you’re after a slightly elevated feel of direct responsiveness without undue harshness, you’ll like the calibration, here. It’s sporty, but it won’t bust your spine.

Cruise the highway at speed, and the tuning of the suspension and steering give the Chevy Sonic a locked-on and planted feel. The car doesn’t get knocked around, even by heavy wind gusts or the presence of nearby transport trucks.

The brakes engage quickly from a slight press on the pedal, although they’re not overly precise. Steering is largely numb and light, typical of the segment, but the ratio is just a touch quicker than it probably needs to be, working with the taut suspension for a dose of added entertainment when the going gets twisty.

The 2017 Chevy Sonic Premier’s 1.4L turbocharged 4-cylinder generates 138 horsepower. It’s responsive under light throttle, where the low-end torque moves it along easily and with minimal noise through city traffic. The engine also stays smooth and creamy in moderate driving.

The bad news? When opened up, it sounds dull, proves a little noisy, and has most of its fun factor sucked up by the largely lazy 6-speed automatic transmission. Opt for the manual transmission to improve the turbocharged Sonic Premier’s performance (and to save some money, too).

This car’s turning circle is bigger than I expected, yet still on the small side, and the wide-angle backup camera adds confidence while maneuvering in tight quarters.

The cargo hold is fairly shallow, although the rear seatbacks fold fully flat, and there’s an additional storage bin underneath the floor. The rear seats are large enough for average-sized adults (barely) and will prove fine for most younger passengers. Up front, drivers of average or slightly greater size can expect a comfy-snug fit that’s not constrictive, plus ample at-hand storage nearby.

Other notables include the factory stereo, which offers above-average kick for the price point, and the headlights, whose high beams cast a bright light far and wide.

Finally, a few exclusive features proved welcome including in-car Wi-Fi access for high-speed data streaming. Let’s not forget OnStar, which is a real confidence-enhancer for you or anyone using your ride should there be a setback on the go.

A few gripes are worth mentioning. My largest dealt with the seats: They’re comfy and upscale, but the suede inserts grabbing at my pants and shirt during entry and exit resulted in a frequent need to readjust my clothes. Also, there’s no covered centre console, just a small covered compartment on the passenger-side dash. And finally, some of the interior plastics are easily scuffed and marked upon contact.

Ultimately, the 2017 Chevy Sonic Premier stands out as a sporty-looking little hatchback with many strengths and few weaknesses. For the money, the distinctive looks, highly relevant feature content, and nicely tuned suspension should help it please a driver seeking a sub-compact car that’s connected, maneuverable, upscale, and designed to hit above its weight where it counts. 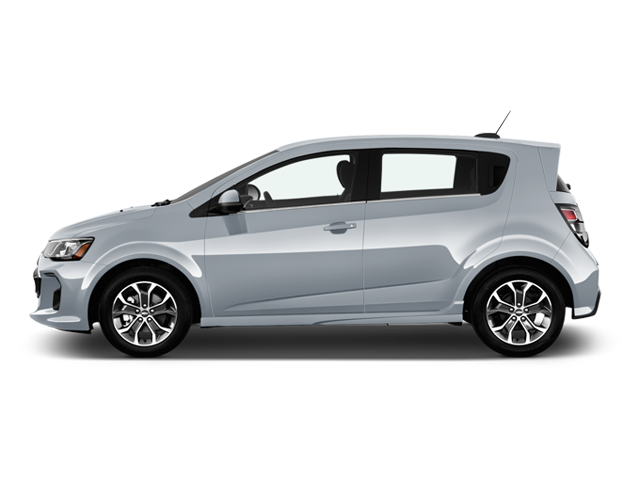 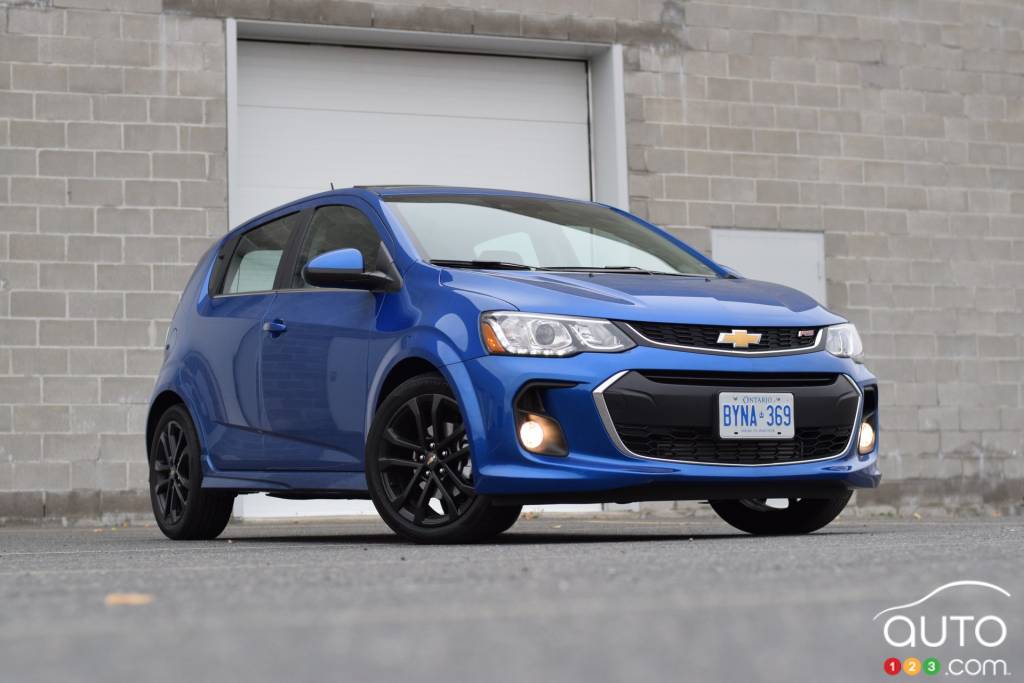 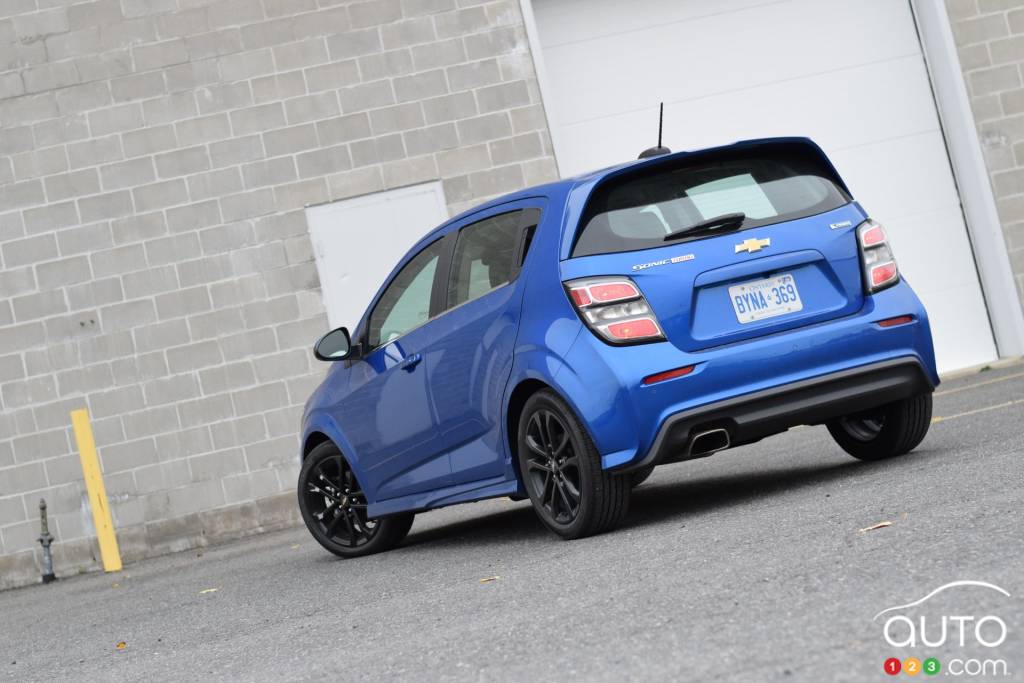 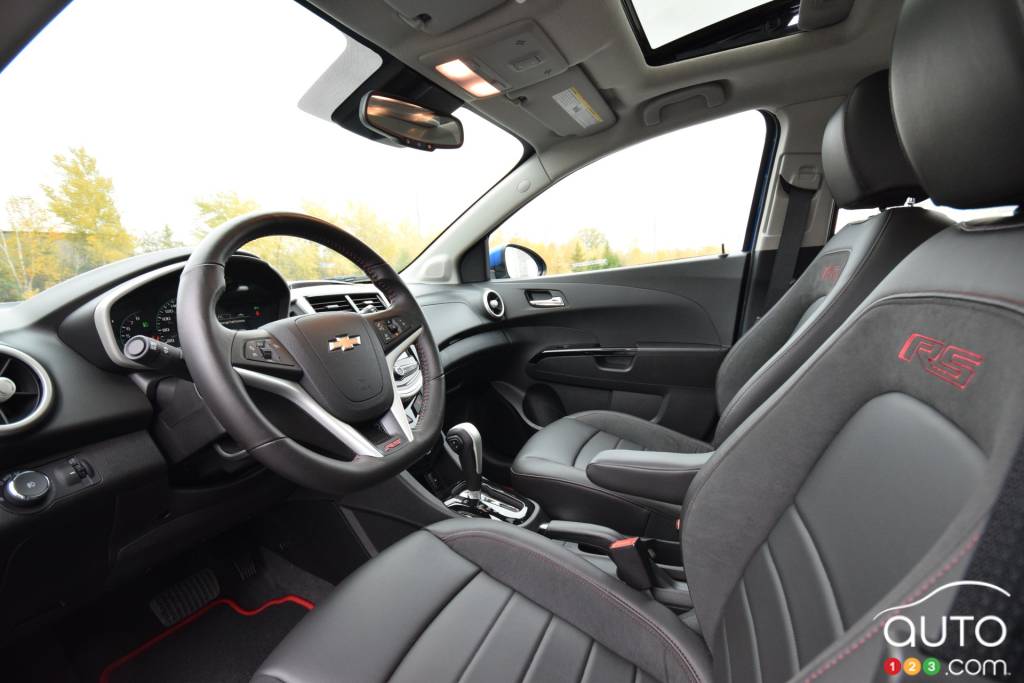 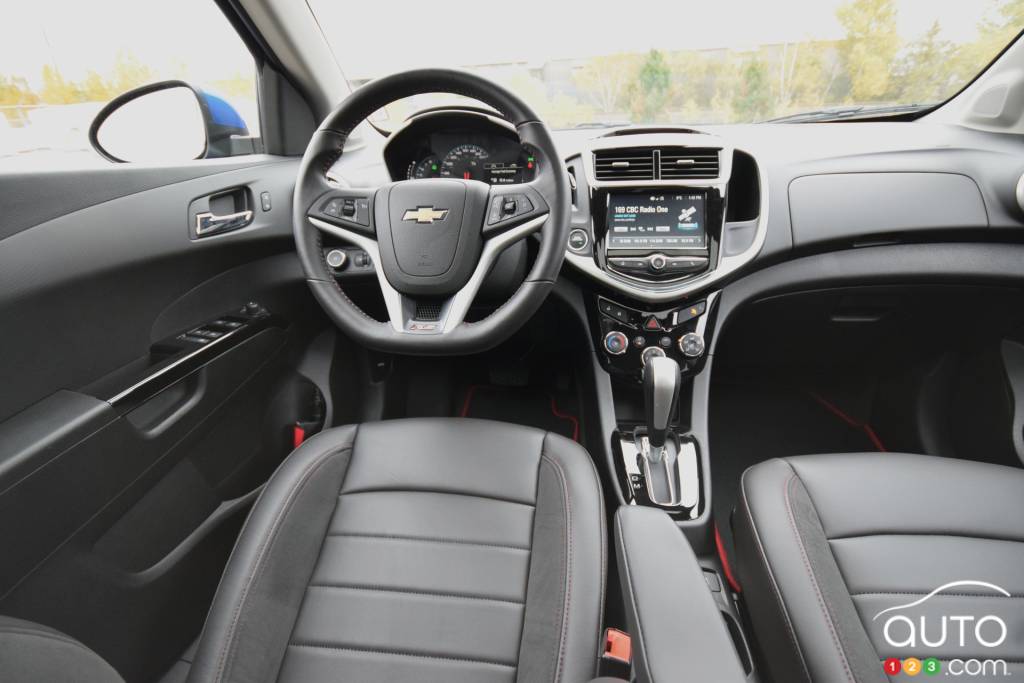 Kelley Blue Book has just published its rankings of the 10 coolest cars under $18,000 USD for 2017. Which one’s your favourite?

Here is a look at the best of what the Canadian market has to offer.

NHTSA has issued a new warning about an earlier recall of the Chevrolet Bolt electric model. Even if their vehicle was repaired under that recall, owners are...