One of the uncontested big stars of the last New York International Auto Show this past March, the Kia Stinger had dazzled us with its highly elegant and very modern silhouette. A number of body elements combined to give it an appearance that was at once sporty and luxurious. According to Peter Shreyer, head of design at Hyundai Motor and Kia Motors, the Stinger is his biggest design success since he joined the South Korean automaker.

Now, a great design is all fine and good, but a car loses much of its charm if it disappoints drivers with its dynamics and performance, especially if it comes billed as a grand touring car.
Our first test drive of the 2018 Kia Stinger took place during a special presentation held in the Los Angeles suburb of Burbank, in California, on a testing and development track located in the Mojave Desert, about two hours’ drive out of town.

Those breathtaking looks
While it’s true that tastes and colour preferences remain firmly in the domain of the subjective, it’s also true that most of the journalists were unequivocally impressed by the Stinger’s shape, which weds the form of a four-door coupe with a rear spoiler on the trunk, giving the car a sportier appeal. By the way, the new model is a five-door sedan - a definite plus in the eyes of many potential buyers.

Top grades go to the front end, the shark’s mouth-style grille surrounded as it is by sophisticated-looking LED headlights, and the front spoiler located right under a vast air intake. At each extremity of the car, Kia designers and engineers made allowance for intakes to allow for cooling the brakes, in such a way as to enhance the esthetic appeal. In the same vein, stylized air exhaust vents are placed between the front wheels and the doors. The hood, meanwhile, features bulges on each side, both of them matched by air intakes.

From what we’ve learned so far, all models will come with leather-covered seats and leather trim on a portion of the dashboard. The infotainment screen is set in relief, as per the current industry trend. I give the Kia Stinger very high marks for its overall presentation, for the comfortably gripped steering wheel and for the excellent ergonomics regarding the various commands, uniformly easy to understand and reach. Only caveat is when it comes to accessing the back row of seats, which due to the slanted roof requires a fair amount of bending over.

All-wheel drive for Canada
In terms of mechanics, two engines options are available. The more economical trims will feature a 2.0L, 255-hp turbo engine able to take the car from 0-100 km/h in 6 seconds. GT versions, meanwhile, will get the 3.3L V6 twin-turbo that generates 365 hp and takes more than one second less to get to 100 km/h. Both engines are bolted to a next-generation 8-speed automatic transmission. And while American buyers can opt for a rear-wheel drive powertrain, all models offered in Canada will have all-wheel drive.

The mechanical conception of the new Stinger took shape at Kia’s development centre in Frankfurt, Germany, and testing was carried out on the legendary Nürburgring track in order to optimize road grip and handling. This German circuit is commonly used for testing by the large auto manufacturers, but Kia didn’t limit itself to taking the car around the track for a few laps. During development the model put in thousands of kilometres in order for engineers to fine-tune its driving dynamics ever further. By the way, development of the car and of the performance of its engines was overseen by Albert Biermann, formerly in charge of BMW’s M series of cars. The new Stinger’s setup is completed by Brembo 4-piston brakes and Michelin Pilot Sport summer (and not all-season) tires.

Two Porsches in our sights
It was a unique and fortuitous circumstance that allowed me to discover the full on-road potential of the 2018 Kia Stinger. While on our way to the track near Burbank, my test-drive partner Marc Lachapelle (at the wheel) and I came across two Porsche 911 GT2s, puttering along impatiently behind a slow-moving delivery truck. When the occasion to pass it came, the two German speedsters accelerated and effortlessly overtook their mobile obstacle. Marc endeavored to follow them, and there ensued a long, fast-paced trek behind the two cars, whose drivers were committed to maintaining a good clip – not dangerous driving by any means, more like sporty.

It was a good test for the car, then, and a testament to the driving skills of my colleague Marc. The V6-equipped Stinger had no trouble keeping up with the sports cars. We noted the car’s superior road handling, as well as the precision of its steering. Of course, this whole exercise was completed with the Sport driving mode selected.

Once at the test centre, road tests carried out in a dynamic space and on a super-sinewy track further confirmed the performance capabilities of the car. Body roll is barely perceptible, and the car remains stable even in tight corners taken at high speed.

Closing argument
Exact pricing for the car, which is expected at Canadian dealerships early next summer, have not been unveiled or at least made official at this point. It was, however, confirmed to us that the Kia Stinger GT’s starting price will be under $47,000 – making it highly competitive vis-à-vis its competitors, and a particularly attractive choice given that it’s such a well-executed, elegant sedan able to deliver noteworthy on-road performance.

It will be interesting to see what results from the looming battle for consumers between the Stinger and the 2019 Genesis G70, models that share a number of mechanical components and offer comparable performance. 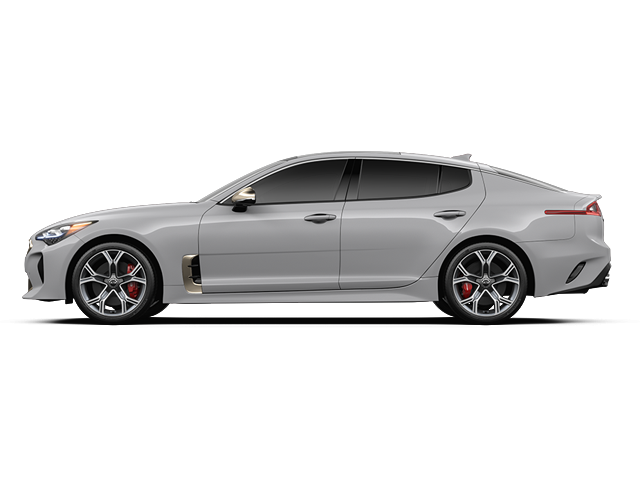 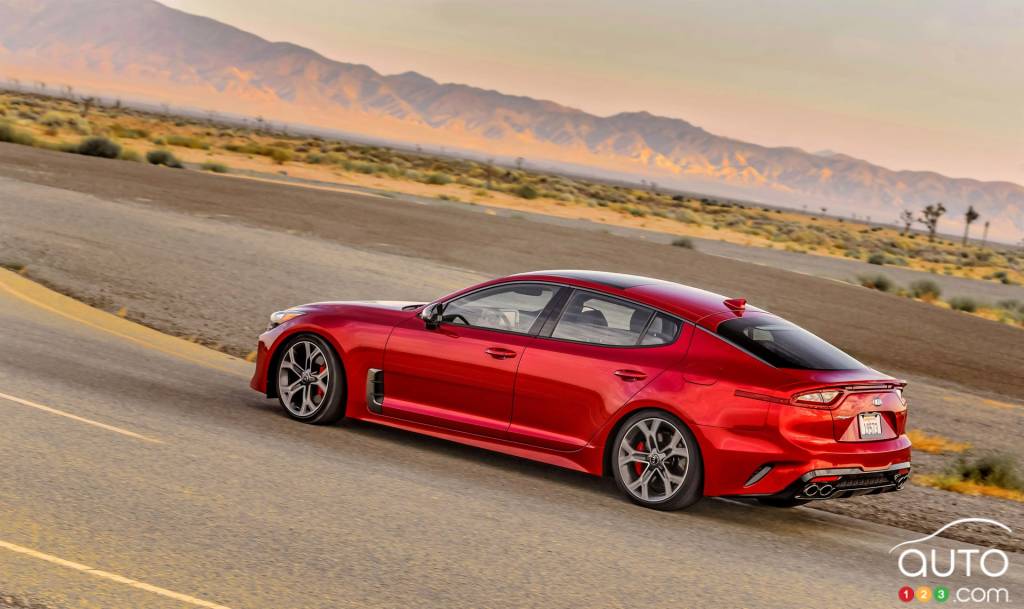 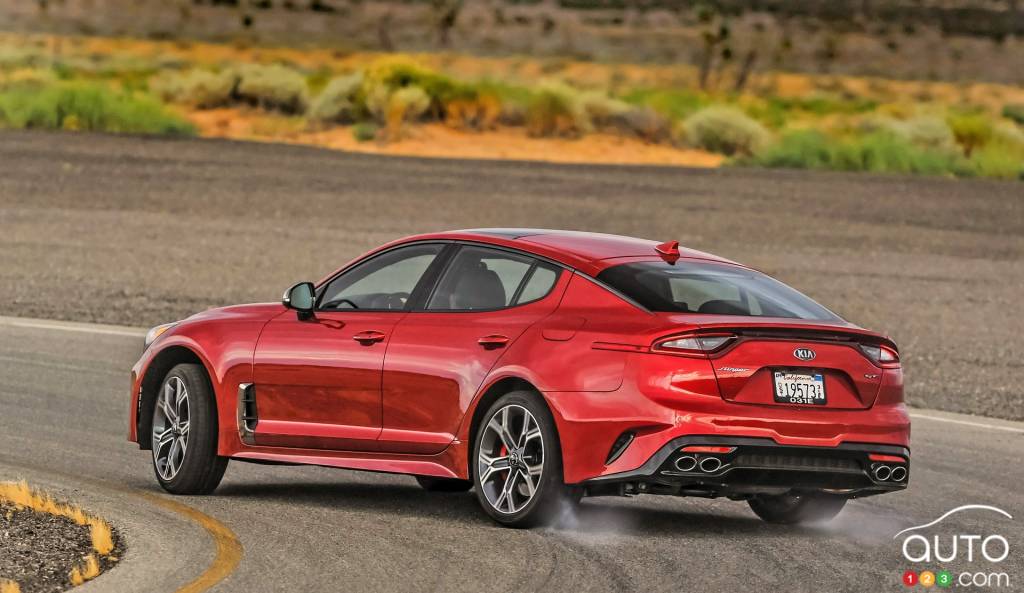 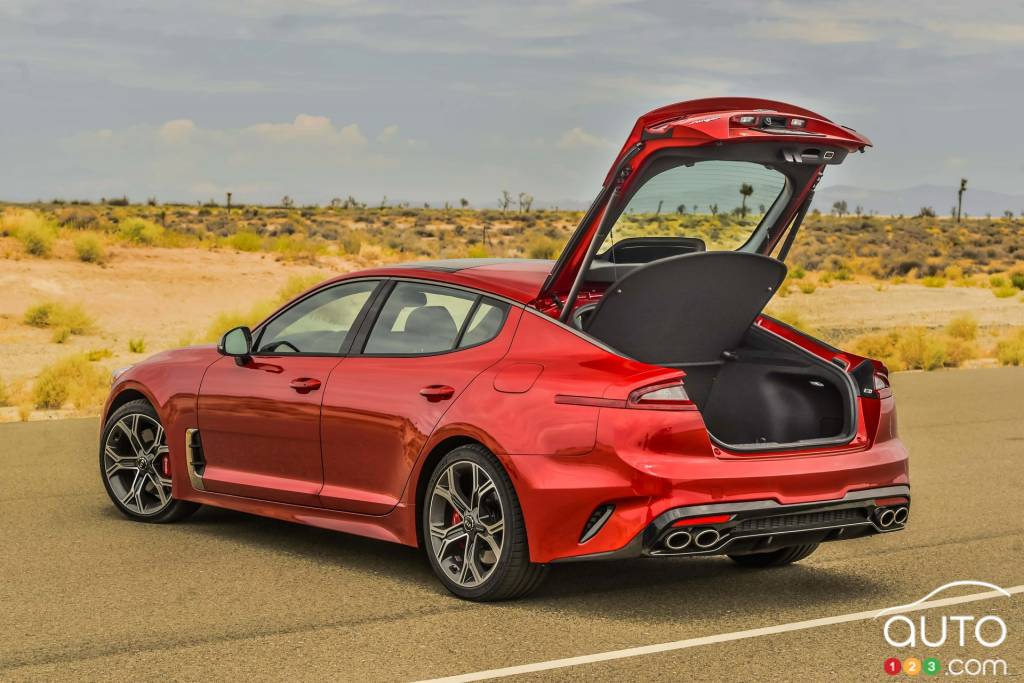 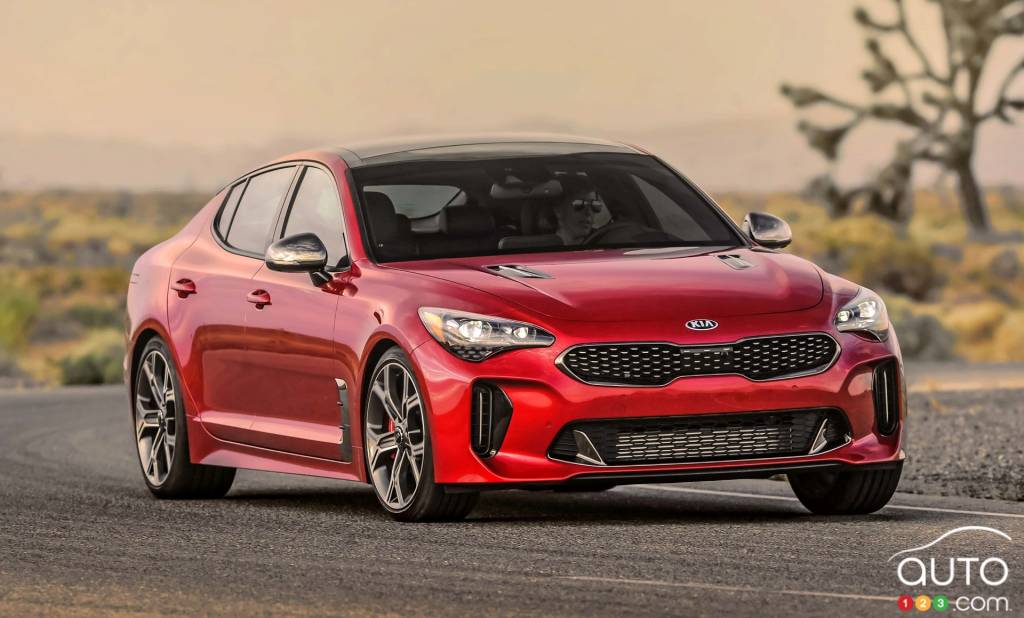 Learn more about the new Kia Stinger and discover why it was chosen best in its category during our 2018 Auto123.com Awards.

The presale is now over and the all-new Kia Stinger sports sedan is finally available at Kia dealers across Canada.

Pre-Order Kia’s Fastest Car Ever Made

Designed in Frankfurt and perfected at Nürburgring, The Kia Stinger 5-seat coupe-style sports sedan is promising big things. We’ve got the info on its arriva...