Geneva, Switzerland — Surely it’s a coincidence that in the midst of a decidedly mediocre Canadian summer, the Silver Star manufacturer invited the automotive press to a sun-drenched outing that would traverse Switzerland, France and Italy. These world premieres are scheduled months in advance, after all, and the ones for the 2018 Mercedes-Benz E-Class Cabriolet and the 2018 smart fortwo cabrio electric drive were no exception.

Still, just getting the chance to enjoy some sun at the wheel of a majestic vessel like the soft-top E-Class was an opportunity not to be missed. As for the urban portions of the outing, which were turned over to the new all-electric fortwo cabrio, let’s just say discovering a city like Geneva behind the wheel of a small car tailor-made for zipping around in heavy traffic was an intriguing prospect in itself.

In direction of Mont Blanc
The principal attraction of this European adventure sits at the border between France and Italy: Mont Blanc, the highest peak in the Alps. An itinerary of just under 200 km was to lead us there; we would do it at the wheel of the newest E-Class Cabriolet, a model celebrating its 25 years of existence in 2017.

The event’s organizers had set out a route taking us through some superb roads perfectly suited to a luxury convertible like the 2018 E-Class. A succession of sinewy roads winding through valleys and over mountain tops, interspersed with a few stretches on French autoroutes (speed limit: 130 km/h) allowed us to get a good idea of the car’s virtues.

Unlike the model it’s replacing, the new Mercedes-Benz E-Class Cabriolet is only available with one engine choice, at least for now. Able to generate 329 hp and 354 lb-ft of torque, the 3.0L V6 twin-turbo is wedded to a 9-speed automatic transmission (replacing the previous 7-speed version) and 4MATIC all-wheel drive.

The Canadian market will not be offered the four other engine configurations available in Europe, but rest assured that the engine consumers will get is well-suited to the car and its main vocation. Buyers have distinct reasons for opting for a convertible over a sedan or a coupe, and make different use of them.

Some surely will be left wishing that the German automaker would add the E 43 AMG to the lineup, or even the V8 twin-turbo of the imposing E 63, but for the moment it’s up to the E 400 4MATIC to win over this country’s open-top driving enthusiasts. Take note that the cabriolet will be available on the market beginning in August, just in time to take advantage of the last weeks of warm temperatures.

Performance-minded and comfortable
The comfort element is an important one for Mercedes-Benz and the 2018 E-Class Cabriolet is particularly excellent in this area. From the leather upholstery to the impressive sound insulation when the roof is up to the AIRCAP and AIRSCARF systems (the former reduces on-board turbulence, the latter massages the necks of the front-seat occupants with warm air), the new edition delivers the luxury it promises. Unsurprisingly, the quality of execution in the cabin is impeccable, with materials you’d expect to find in the S-Class – though for a lot less here!

The E-Class convertible performs with cradle-like gentleness as we drive between Geneva and Lake Annecy, and then from Flumet to the French entrance to the Mont Blanc tunnel. The Mercedes-Benz E 400 4MATIC Cabriolet enters this 11.6 km-long marvel of engineering without any driver intervention, thanks to the many drive assist technologies going about their job, and at a speed prescribed by the very strict limits imposed inside the tunnel.

Acceleration is smooth and progressive, road grip is downright stunning for a touring convertible, and the automatic gearbox ably manages the gear changes according to the type of driving required. The sound of the engine could benefit from a little more aggression, even in Sport+ mode, but then again roaring like a lion is not really part of the job description of this yacht on wheels.
The beauty of a convertible in this corner of the globe, is that it allows occupants to fully appreciate the grandiose nature that surrounds them. While the temperature did dip as we approached the Alps, my colleague and I preferred to keep the top in the trunk, if only to take in more of the beauty the surrounding peaks and vistas offered us. On the other side of the natural frontier we crossed, the village of Courmayeur is another tiny slice of paradise, its distinctive homes melding organically into the base of the mountains.

The verdict after our first of two days behind the wheel of the 2018 E-Class Cabriolet was simple: the next-generation model offers a driving experience exponentially enhanced since the debut model back in 1992. Capable performance-wise, comfortable, safe and impressively well put-together, the latest iteration of the model will do more than just put smiles on the faces of its occupants, it will ensure they’re fresh and rested once they arrive at destination.

An electric return to Geneva
The itinerary for our return of Geneva was similar to the one that got us there, but our sun-soaked drive was going to be taken at the wheel of the 2018 smart fortwo cabrio electric drive. Obviously its mission is totally different than that of the E-Class; it offers a means of emissions-free transportation for residents of large urban centres. And while the city of diplomats is far from the most densely populated city in Europe, traffic snarls are not uncommon there. In fact we experienced one of them almost immediately after getting underway in our new all-electric smart fortwo. And here’s where one of the biggest advantages of such a small car comes into play: we could dart in and out of traffic and manoeuvre in really tight places (the car has a turning diameter of only 6.95 metres) with disconcerting ease.

The electric powertrain emits no CO2, obviously, and no sound to speak of either. What’s more, the driving pleasure it delivers is superior to that provided by the gasoline-engine smart fortwo, which as already reported is headed for retirement in North America in the near-future. Acceleration is dynamic, steering is quick and direct, and the chassis is rigid enough to reassure the two occupants. On the other hand the seating is too hard and the suspension is too firm to keep their bodies entirely comfortable. I can only imagine what would be the longer-term effects of driving this car on our pot-holed Canadian streets!

The cabrio version (starting at $31,800) will arrive in Canada in October, at the same time as the coupe (starting at $28,000). The smart brand is clearly counting on current government rebates to help it move a large number of its small city cars in this country. Time will tell if that strategy is a winning one for the automaker. 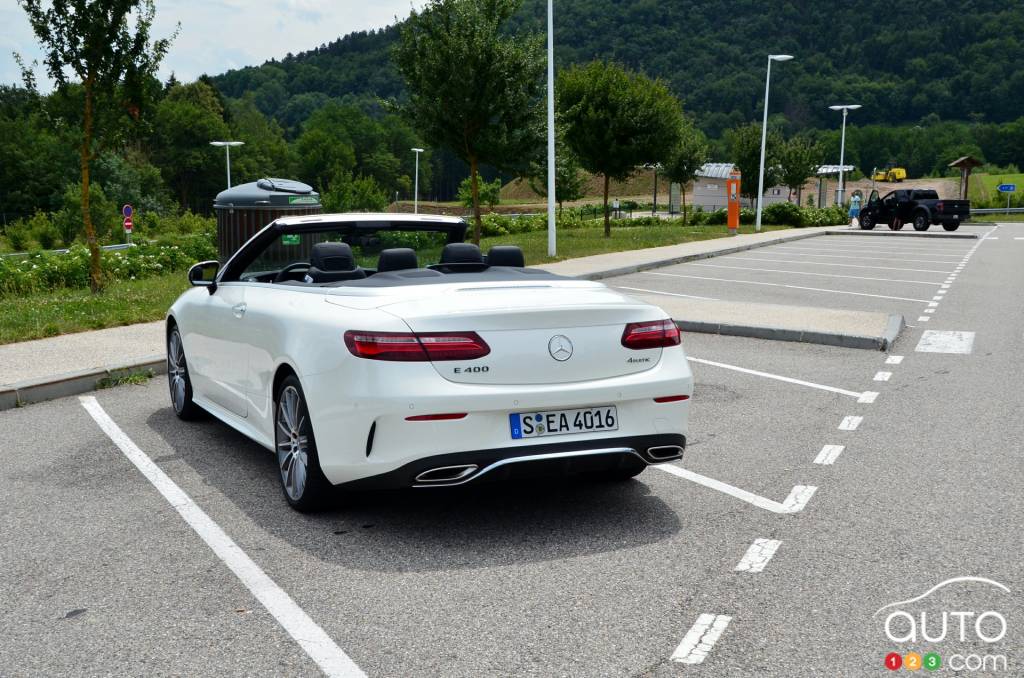 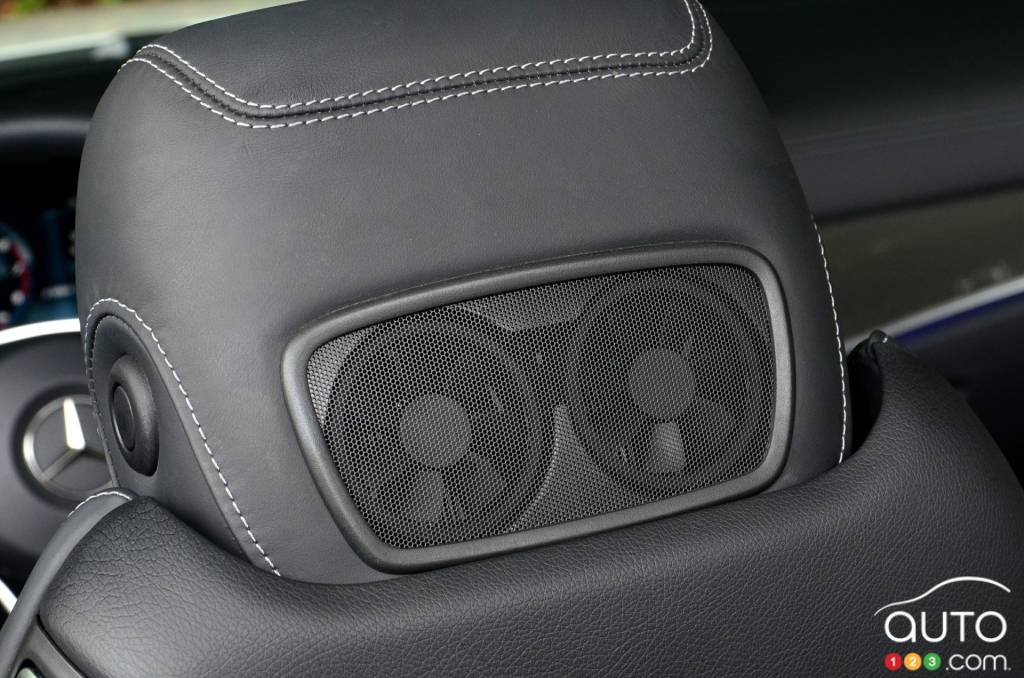 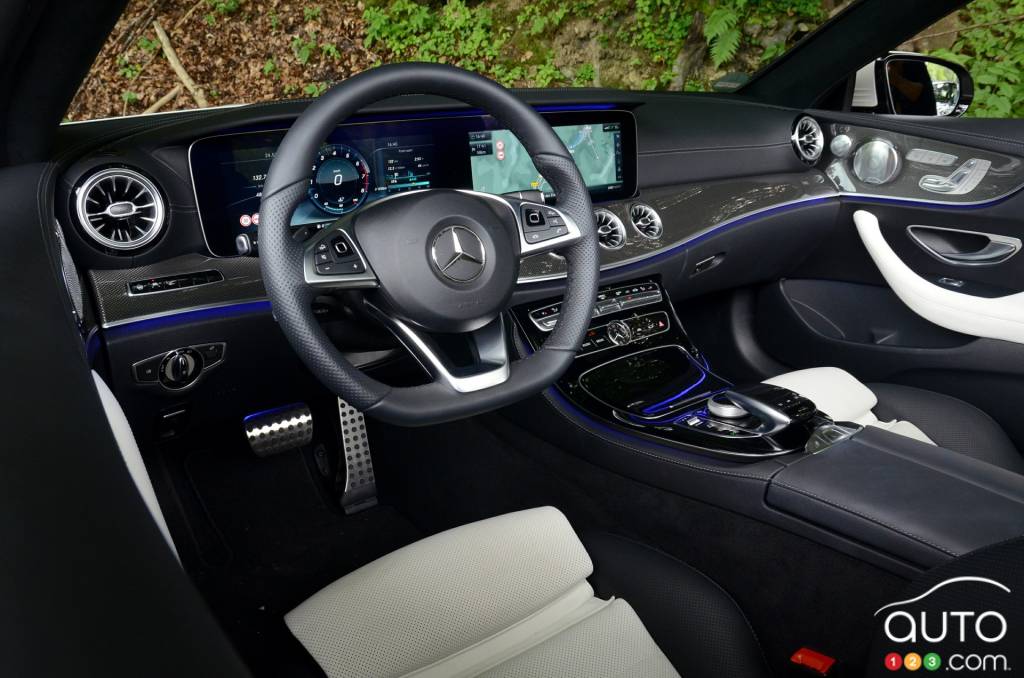 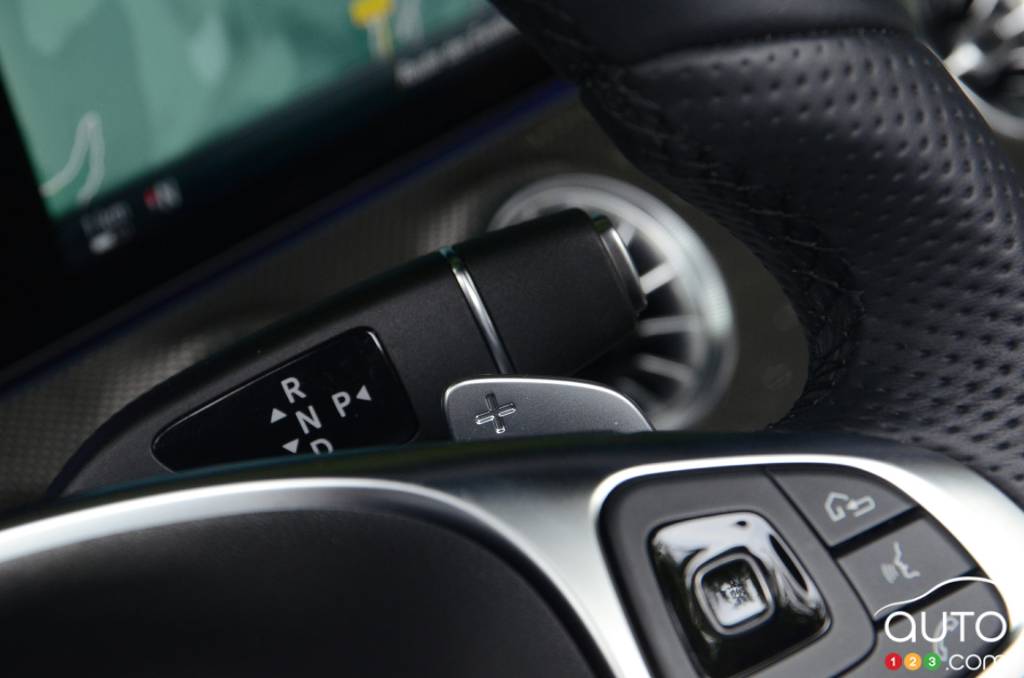 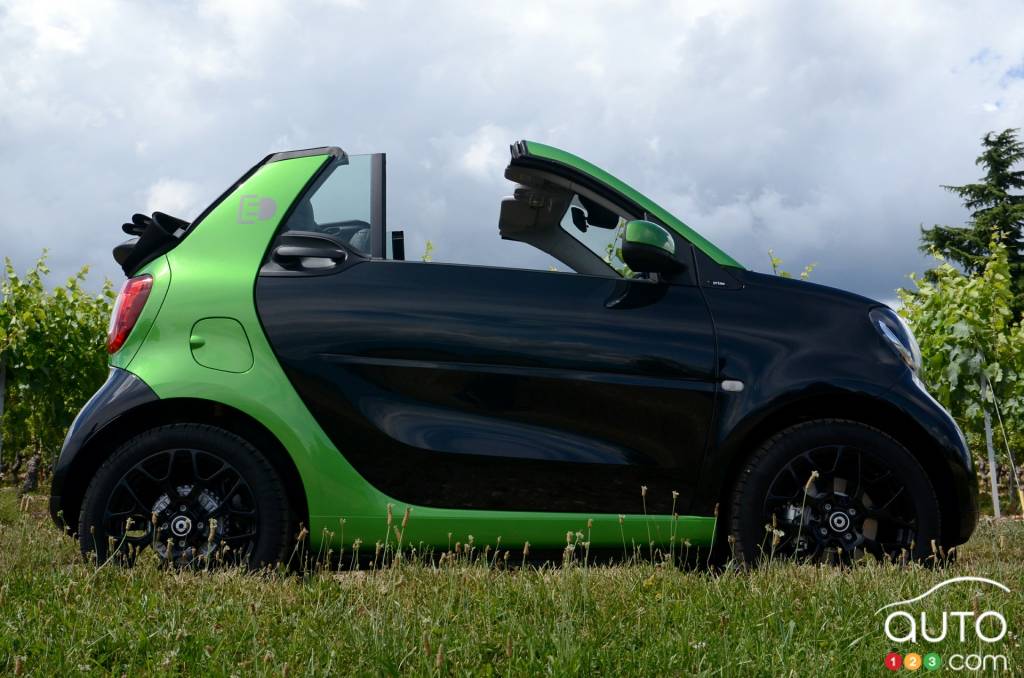 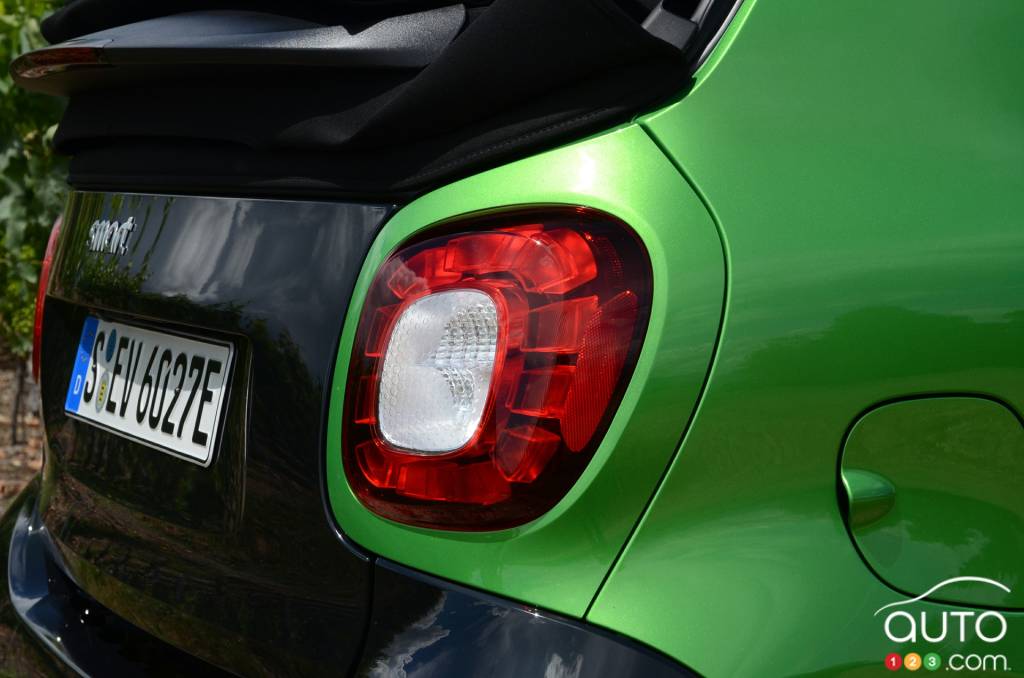 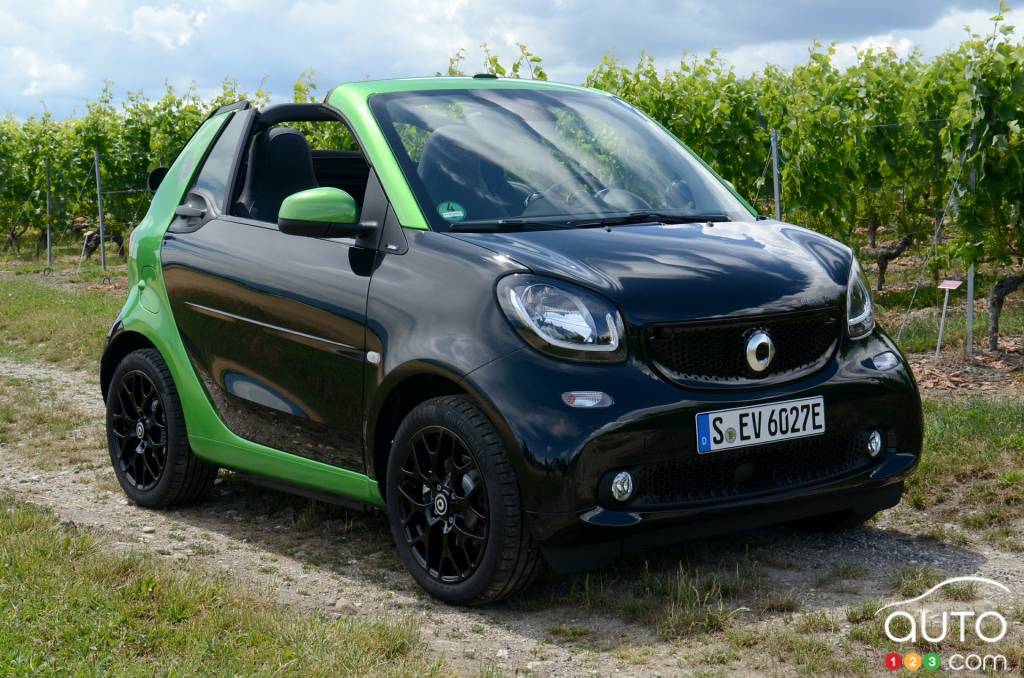 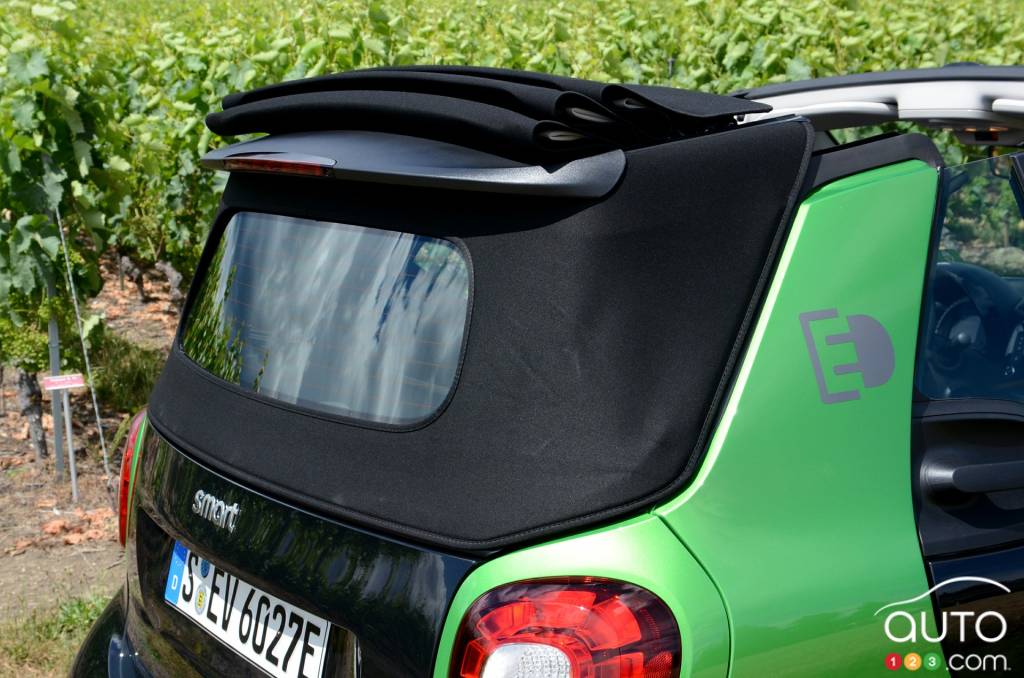 Interestingly, smart becomes the only car manufacturer in the world to offer its entire model range with both combustion engines and pure battery-electric dr...