The Prius c is another one of those cars that are getting long in the tooth over at Toyota. But unlike the Yaris that we reviewed recently, the runt of the Prius hybrid litter is aging fairly well, and it remains an option worth considering. Take a moment to consult our 2018 guide to hybrid and electric vehicles currently available.

You don’t see too many of them on the road, and Toyota doesn’t talk it up too much. But in my opinion, it remains a quietly effective, poised product. However, we recommend you hone up on your math skills when evaluating if the model is worth it.

Math? Who said anything about math?

The important criteria
The buyer who’s in the market for a subcompact is almost by definition looking for a few specific qualities. For starters, the car should offer some versatility when it comes to loading people and cargo. A “fun little car” is all well and good, but it has to be able to accommodate a few suitcases and assorted other doodads.

The hatchback format of the Prius c allows it to meet that criterion.

Then, there’s the matter of fuel economy. You don’t buy a small car with the expectation of getting hit hard at the pump. And the fact is, some 2018-vintage city cars still guzzle too much gas.

The Prius c, though, is downright miserly, thanks of course to its hybrid powertrain. For my part, I managed an average of between 4.0L and 4.5L/100 km every time I drove it.

That’s pretty appealing, even if the industry is changing so quickly these days that already some consumers expect even better.

Next on the buyer’s checklist is comfort. I think everyone shopping in this segment is realistic enough not to expect miracles, but there’s a minimum to be reached. And the Prius c hits that minimum and then some. Which I’ll come back to.

Lastly, there’s the question of price. No way should you be overpaying in this frugal subcompact segment.

And this is where the Prius c gets into a bit of trouble. Although, an assiduous shopper should be able to come to a reasonable compromise. More on that in a bit as well.

2012
The Prius first debuted in 2012, and it has not been renewed since then. This is a sticking point for me, particularly with this manufacturer. Toyota has the bad habit of sitting on its laurels just a little too long with some of its models, mainly because it benefits from the loyalty of consumers who meekly return to their brand dealerships and take what’s on offer, few questions asked.

They do this because they know the products are reliable. In return, though, seems to me Toyota could give back and offer up fresher products in some cases.

Really, we should have seen the second generation of the model appear by now. But still we wait.

Fortunately, in the case of the Prius c, the model has aged relatively well. Esthetically it holds its own, and the interior is fine when stacked up against the competition. The drive is amazingly comfortable. But you need patience when accelerating – lots of patience.

The 2018 Prius c, in sum, offers a solid driving experience for this type of vehicle.

Consumption
The most elemental selling point of the Prius remains its excellent fuel economy. Because of the small engine it has (a 1.5L 4-cylinder), because of the presence of a CVT transmission, and because of the support of the battery pack, consumption never climbs above 5.0L/100 km. And in contrast with gas-engine vehicles, the more you drive in the city, where the hybrid system is most effective, the lower that figure goes.

My best figure, 3.8L/100 km, came during a 100-km stint driving exclusively in an urban environment.

Where the dreaded math comes in, and this goes back to the early days of hybrid cars, is in regards to the price. Does paying a bit more upfront for a Prius c instead of a higher-consumption Honda Fit or Kia Rio, for example, provide a better return on investment? And if so, how many years does it take before it does?

The math
La Prius c is available in two configurations: the base model and the trim with the Technology package. The first of these can be supplemented with the Upgrade package.

So like they do in House Hunters, we can eliminate the worst option right off the bat, and that would be the top-end trim. At $27,050, that’s simply MUCH too expensive for this car. This leaves the base model and its Upgrade-enhanced version, and since the difference between the two is only $900, the better-equipped version gets the nod from us. It comes with two pretty essential features: cruise control and 60/40 split fold-down rear bench.

So equipped, you’ll drive off the lot having signed off on a total of some $25,000, before taxes.

That’s not exactly cheap, we grant you.

But in return, the car gives you an average saving of 2.5L/100 km in comparison with most of its non-hybrid rivals. Let’s say you drive 25,000 km per year; that works out to an $800 savings on gas. Over five years, that amounts to $4,000 you won’t have spent at the pump. Feeling good for helping the environment is a free bonus.

Then it’s a matter of using that as the margin to consider when looking at the competition. Do that and you realize that the $22,900 starting price of the Prius makes sense; its cost with the gas savings factored in is $18,900. A Kia Rio LX with automatic transmission, in comparison, costs $18,000. An equivalent Honda Fit? $20,000. We should point out that both of these comparison models are better equipped than the Prius c, notably in terms of connectivity and safety features.

Did we mention that the Prius c is outdated?

Buying the Prius c (or leasing it, though that requires a whole other set of calculations due to different residual values of each manufacturer’s products, and to different interest rates and promotions) is not a bad decision. But it does mean holding on to the car for longer than five years.

Drive it for eight or nine years, and you come out clearly ahead, especially since the car has that patented Toyota reliability.

The big decision you ultimately have to make, then, is whether you’re prepared to hold on to an already-aging model for long enough to make the investment worth it.

It’s your decision. I would only add one more possibility, and it’s an option I would probably choose: consider finding a used Prius c. Benefit from someone else’s impatience. 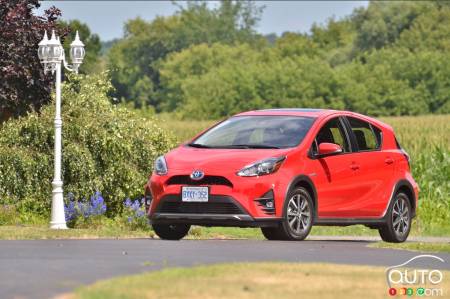 The all-new eighth-generation 2018 Toyota Camry made quite a splash when it made its world premiere at the beginning of the year. Since then we’ve been await...

Toyota has lit up the LA Auto Show’s media day with its presentation of the 2021 Toyota RAV4 Prime, the plug-in hybrid version of the popular SUV. Toyota is ...