Between them, the BMW X5 and the GLE from Mercedes-Benz own the lion's share of sales in the luxury midsize SUV category. In 2018, Mercedes-Benz sold 7,480 GLEs in Canada, placing it ahead of BMW and the 6,462 units it moved of the X5. Respectively, they rank second and third in sales behind the undisputed champion of the segment, the Lexus RX (9,329 units sold in 2018).

Here we pit the two most popular German models in the category head to head. The GLE, which started life as the ML, was one of the first Mercedes-Benz vehicles built in the United States. It has been assembled since 1997 (when it was still the ML) at the company’s plant in Tuscaloosa, Alabama. The X5 arrived in 2000 and is also built at Uncle Sam's factory in Spartanburg, South Carolina.

Traditionally, buyers chose the ML for comfort and the X5 for performance. Over the generations, however, the gap has narrowed to the point of disappearing completely with the new generations of the model on the road right now. Let's take a look at the two rivals. 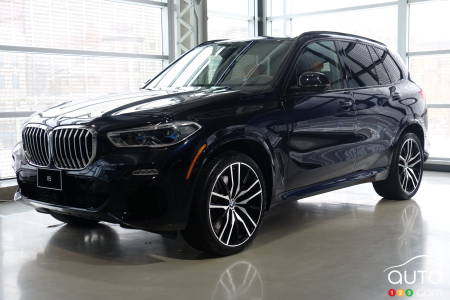 BMW was the first manufacturer to focus on the sport part of the sport-utility equation. The media event rolling out the first-generation X5 SUV included a road circuit session, just to make it clear to all that BMW was not giving up its sports genes, even though it had built what was basically a truck. Since then, BMW has maintained this approach, adding over time a diesel version and an M variant. Clearly, the concept of driving pleasure is in BMW’s DNA.

Specifications for the 2019 BMW X5

Driver-oriented
The most recent edition, renewed last year, gets new designations for the different trims. The entry-level model, the xDrive 40i, replaces last year's 35i for the six-cylinder variant. We could crank out a whole book chapter exploring all the embedded technology.

The new xDrive 50i V8 comes in a familiar 4.4L configuration and once again uses turbo-charging to boost power. The engine was upgraded, resulting in a gain of 11 hp for a total of 456 and 479 lb-ft of torque. 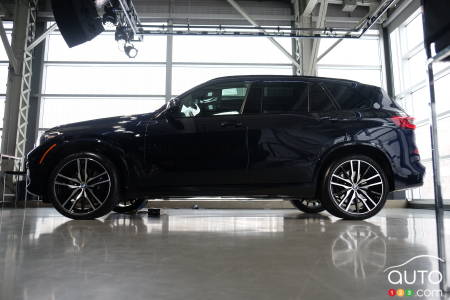 We expect to see a new X5M performance variant and a PHEV within the next few months.

An overgrown wagon
Visually the X5 has more statuesque in its approach, its square profile giving it the feel of a big station wagon. The two models offer roughly the same functions, albeit with two distinct approaches. In the BMW interactions take place in part via, while the GLE prefers vocal commands. Those can be used on the X5 as well, but generally gestural commands are to increase the volume of the radio, change the station, raise the temperature level, answer the phone and so on, much like in the company’s 7 Series. 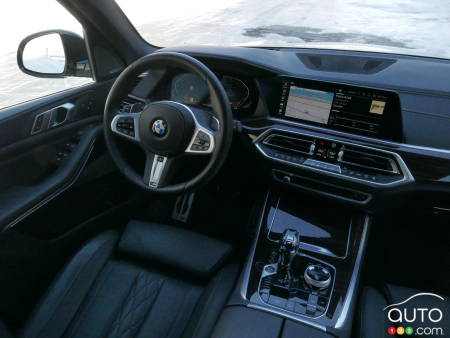 New technologies include a traffic jam feature that promises what BMW calls "extended non-intervention time", suggesting that the car will be happy to travel on very congested roads in a semi-autonomous way.

The new X5 will also be compatible with BMW's Intelligent Personal Assistant, an artificial intelligence device that will allow the driver to control certain secondary functions through voice commands, learn air conditioning preferences and other systems to alert the driver in case of problems.

Comfort and Sport
With 4-wheel drive and air suspension, the X5 masterfully combines comfort and performance. While not displaying quite the aggressiveness of the M, the 50i and its 456 horses will bring you in illegal territory in 5 seconds, so it’s recommended you use the speed limit warning to remind you to lift your foot before you hit 150 km/h on the highway. For all that, soundproofing is good, and handling one of the indisputably strong points of the X5. 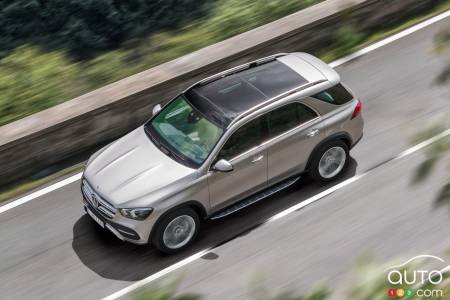 The beginnings of the ML were not so rosy an affair as the X5’s, and that’s mainly because the first generation was poorly built with a cheap interior; overall it was a far cry from what you normally associate with the Mercedes brand. Fortunately things have changed since then, especially since the arrival of the renamed GLE.

The latest edition has gained volume and its aerodynamics have been reworked, with the result that it has the lowest coefficient of drag in the category. The extra space has made it possible to offer an optional third row of seats, which in reality is more an extra space for luggage than it is for passengers. But it does mean that the X5 has just lost its longstanding space advantage.

Technology
Mercedes-Benz was always recognized as a monster in the field of technologies. The GLE is equipped with the latest-generation MBUX (Mercedes-Benz User Experience) multimedia system, which debuted in the A Class and has been improved for the GLE. It features two massive 12.3-inch screens placed side by side to impressive effect. Instrument cluster information and the multimedia display are easily readable on these large high-definition displays. Users can create the digital environment that best suits them via a choice between four different display styles: Modern Classic (evolution of the classic display style using elegant and sleek elements); Sport (high-tech turbine type, playing on yellow and black to create a resolutely sporty, modern contrast); Progressive (minimalist digital style); and Discreet (reduces the displays to a minimum). Just say "Hey Mercedes" to activate the smart voice command and ask it what you want.

In addition to voice recognition, the GLE’s MBUX also recognizes gestures, just like the X5 - and it learns. It might become your best friend, who knows. Further back, meanwhile, the longer chassis creates more space at the rear with a bench that recedes 10 cm in the second row (8 cm for the X5) and that possibility of a third row, available on request.

Many changes under the hood
There are new powertrain options open to buyers for 2020. At launch the GLE comes with a choice of two gasoline engines. The first is an inline-6 with EQ Boost function (GLE 450 4MATIC), the second a four-cylinder (GLE 350 4MATIC). 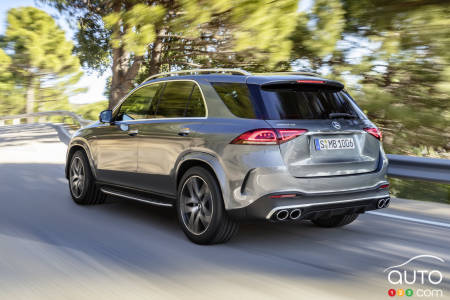 The GLE 450 4MATIC’s 6-cylinder with 48-volt technology delivers 362 hp and 369 lb-ft of torque. EQ Boost technology improves performance over short periods of time by providing an additional 21 hp and 184 lb-ft more torque. The integrated starter-alternator is responsible for hybrid functions such as EQ Boost and energy recovery, while allowing fuel savings. The 2.0L turbo 4-cylinder turbo of the GLE 350 4MATIC makes 255 hp and 273 lb-ft of torque.

Both engines are managed by a 9-speed automatic and, like the X5, the GLE offers AWD technology.

Mercedes-Benz offers an optional system called E-Active Body Control. In a nutshell, that system’s cameras analyze the road, detect deformations and adapt the ride accordingly. But that's not all: the suspension also compensates for body movements. If the car plunges into a curve, the suspension leans inwards a bit, like a motorcycle. It’s able to contain weight transfers within the limits of the laws of gravity and ensure a more-neutral on-road behavior.

Advantage BMW X5
At the moment the X5 is the only one of the two models to offer a V8 under the hood, and this engine really brings out the brand’s trademark sporting nature; those who want a more nervous feeling under the right foot and are prepared to pay the price at the pump will be happy.

Advantage Mercedes GLE
There’s no denying it: the long unbroken dash with two huge screens is pretty spectacular. Right now, there’s nothing else on the market that beats it. Mercedes-Benz has pushed its technology expertise even further forward with this highly configurable system. If you want to go off-road, the GLE is able to get there with a transfer case and a low gearbox to optimize rough-terrain capabilities. BMW can only counter with four drive modes, one of them off-road.

Similarities
There are many, in fact. The new, larger format of the GLE brings it to almost to the same level as the X5 size-wise. The lists of options for each are equally interminable and costly. Other tie scores noted were for the technological level overall, the electronic driving aids, pricing, warranties and the level of luxury.

Verdict
Honestly, it's a question of choice. Some will love the more modern side of Mercedes' interior presentation, while others will be seduced by the closer intimacy between driver and road that the X5 delivers. Wading through the option list is an expensive proposition in both cases, but you will be able in both cases to sculpt your new SUV to your liking. One more thing: we’ll wait to get behind the wheel of the upcoming X5M and 63 AMG performance variants to see if that changes anything in the power struggle between these two segment leaders.